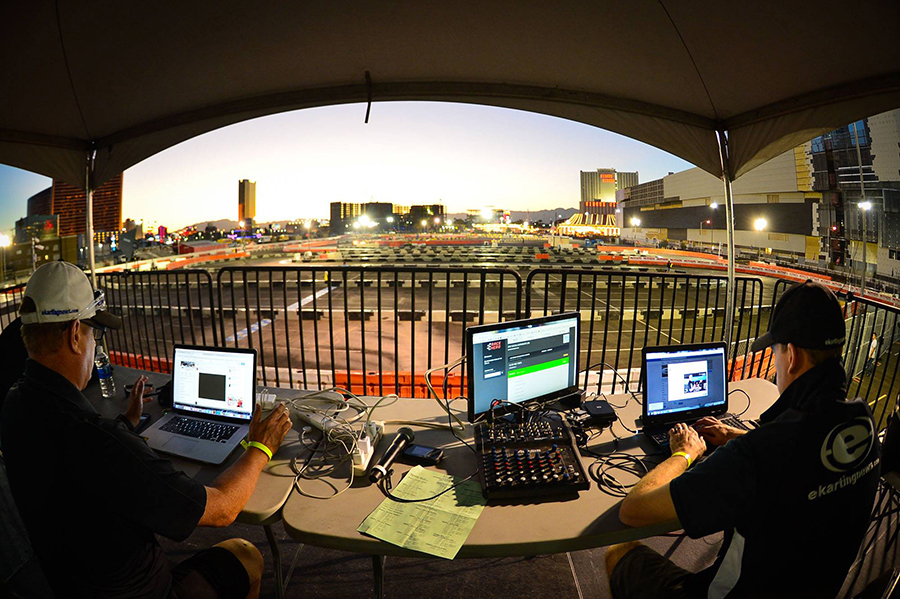 We’re now a week on from the 21st running of the Superkarts! USA SuperNationals in Las Vegas, and everyone has returned home. They’ve enjoyed Thanksgiving with family and friends, and they’ve ‘rested up’ through the weekend. During this time, I’ve personally been reflecting on the event itself, going over some of the happenings and experiences that stand out in my mind.

This year’s race was once again run directly across the road from the Westgate Hotel and the Las Vegas Convention Center but, on this occasion, it was moved to a brand-new parking lot with fresh pavement that provided SKUSA with a much larger footprint on which to construct the track and paddock area. Track designers and veteran SuperNats competitors Bonnier Moulton, Howie Idelson and Wesley Boswell penned a layout that received the thumbs up from everyone I spoke with, offering up a diverse mix of high-speed and low-speed corners, challenging hairpins and quick 90s, tight multi-corner complexes and a double-apex carousel. Many drivers were quoted as calling the track the ‘best ever’. The only true negative comments that stemmed from the venue layout focused on the positioning of the spectator grandstands, which made it very difficult to see much of the action. The overall track shape was long and narrow, fit in between the Vegas Strip and Paradise Road, and this put the spectators at a significant distance from the Strip side of the track that housed turns 8 to 13. SKUSA placed four of the five grandstands at start-finish (three for spectators and one for mechanics), and while this provided easy access from the paddock, it also limited visibility thanks to the necessary use of the higher hydro-barriers in the track layout. In hindsight, re-locating the three spectator grandstands to the main straightaway would have changed the sightlines drastically. SKUSA considered moving the viewing area early in the event, but this was not doable as additional fencing would have needed to have been added to meet liability insurance requirements. This was not an option, but you can be sure that sightlines will a primary concern in the design of next year’s venue.

It should come as no surprise that winning at the SuperNationals can be an emotional experience. I’m fortunate to have greeted all the podium finishers when they came back around to start-finish, right before we rolled into the post-race podium presentations. Billy Musgrave’s ear-to-ear smile after winning S1 Pro Stock Honda is one that I’ll never forget. The look of relief in the eyes of Ryan Kinnear following his S4 Master Stock Honda triumph provided a view into the stress of competition, and his desire to perform for his tuner Alain Bordes, who passed away suddenly early in the year. Mike Jones had tears streaming from his eyes when we hugged as he jumped from his seat after scoring his first SuperNats victory and, last but not least, Paolo De Conto’s celebration after winning his third KZ final was pure and overflowing. I’m always impressed by the respect shared between the factory KZ drivers during the cooldown lap and the podium celebrations. High-fives, fist bumps, thumbs up and applause for each other post-race presents a level of professionalism that I admire. Bas Lammers riding off the track on the back of Anthony Abbasse’s Sodikart was a fitting tribute as he ended his time with the French manufacturer.

On the other side of the emotional coin, I was charged with the tough task of alerting a pair of winners of in-race penalties that removed them from victory and elevated others to the top step of the podium. I know that there are people who want to hold the podiums at the end of the day, so that the results are all official. Personally, when it comes to a major race like the SuperNationals, I’m a huge proponent of scheduling the podiums presentations right after the checkered flag of each race. It’s the approach implemented by all professional racing series and it’s how it was always done at the SuperNationals. The wind and rain of 2013 forced the podium presentations inside the Rio, pairing the individual championship awards presentations with the year’s SKUSA Pro Tour. This was continued through to 2016, but the extended timing of tech and protests often left us waiting for hours, always listening to the complaints of racers who were watching their Sunday night flight cut-off times close in. I know that there are downsides for awarding unofficial podiums, but I still like it. I want true emotion when I announce the winners, not the watered-down acknowledgement 4-8 hours later.

Having called all 10 races on SuperSunday, I can confidently state that I witnessed some truly tremendous racecraft this year. I watched drivers step up when challenged, hitting their marks lap after lap while being pressured heavily from behind. I witnessed incredibly clean and decisive overtaking maneuvers that left no room for counter-attack, and likely the same amount of ‘over-under’ defence moves to maintain position when the attacking driver drove past the apex. At its purest form, there is nothing cleaner than karting. So, with that said, what steps can we take to instill a true respect for quality racecraft in those who continue to drive like idiots? Is it simply time to park guys for a year? Is it time to roll out one-year suspensions or can it be done with truly aggressive race day penalties. I was involved in several discussions through the week centering on the need for officials to be flat-out brutal in penalty assessment to put an end to the horrible driving and decision making we’re seeing. I’m still a firm believer that while racing organizations can invest in video marshalling or the implementation of the pushback bumper, the bottom line is that it comes down to the individual, the racer. Poor driving must be put on the driver, not the organization. There is a mindset in karting right now that over-aggressive contact is fine. Drivers….it is not. If you want to graduate to cars, you’re training yourself for a huge and very expensive failure. Drive like you did at the SuperNationals and you’ll blow through your open wheel car budget in a weekend or two.

While I’m on a roll, my blood is still boiling with the lack of acknowledgement for yellow flags. From my position in the Cooper Tire Tower at Start-Finish, I watched almost EVERY driver blow through waving yellow flags in turn 14 at full throttle, without even a lift off the pedal, let alone a raised hand to acknowledge the flag and incident. There were a few occasions where the well-being of a driver involved in a front straight wreck was traded in to maintain a fast lap during a practice session….YES, a practice session. It’s disgusting. I remember seeing only one driver raise his hand for a yellow, and it was veteran Matt Johnson in X30 Master. Matt has my respect. My personal suggestion for the race management staff would be to note the laps that had waving yellows, and then go back and look at each driver’s times on that lap. If it’s not a tenth or two slower, I’d take away their fast lap in qualifying. Do that for a couple races and we’ll see slowing drivers and hands in the air. If this doesn’t happen, it’s only a matter of time before a driver or a corner worker is seriously hurt by some barreling into an existing incident.

Connor De Phillippi’s hold of the overall SuperNationals win record remains intact at four, although a couple of drivers made real runs at joining him on top of the chart. Bonnier Moulton was a contender in the S4 Super Master class, but came up just short, while Leonardo Nienkotter had the record in his cross-hairs with his fourth X30 Master crown before the race was called early when a hydro-barrier exploded and emptied its contents on the track. You know that both drivers will be back for another shot in 2018, and you can now add De Conto to the three-time list, having won in KZ to push his money won total to well over $40,000.

SKUSA has once again invested in promoting the sport through its CBS Sports Network coverage and the shows are scheduled for mid-December. This year, Superkarts! USA also streamed the SuperNationals live on their Facebook page, which was a resounding success. SKUSA’s goal with the television coverage is to promote the sport outside the community, and the reach of the CBSSN package has been strong. The live streaming through Facebook hits a different group with its primary viewership – friends, family and karting enthusiasts – which moves the value from introducing the sport to potential racers to providing access to those who cannot attend the event. That said, there is still potential for growing the sport with the live streaming effort through the power of social media. As I pushed aggressively during the broadcast, the karting community can step in to provide the extended reach that is needed by simply sharing the SKUSA live link to their own followers. If everyone who tunes in simply shares the feed to their Facebook followers with a little message describing the sport and inviting people to watch, the reach could be massive. There was a minor issue as eight of the main events were not being loaded to SKUSA’s Facebook ‘Video’ archive, but they are in the process of getting that handled now. That said, if you look at the X30 Senior and S1 Pro Stock Honda videos, they have logged over 40,000 combined views in just a week with a Facebook ‘reach’ of over 100,000 people, which is incredible. If karters have any desire to grow the sport, I would recommend that everyone share those videos again to give your friends and followers a chance to see what fuels your passion for the sport.

I’ll cap off this Morning Coffee look back at the SuperNationals with a nod towards the future, as SKUSA CEO Tom Kutscher announced a return to the Rio All-Suite Hotel and Casino for 2018. SKUSA has signed a long-term deal that will take the race back to the amphitheatre-style location that was the initial landing pad for the SuperNats first trip into the city after five years out at the XPlex track in Sloan. The Rio is the spiritual home for the race within the city limits and the news was welcomed by everyone in the paddock.

So, it’s now time to take a deep breath, reset the meter, and begin prep for 2018. SKUSA is just six weeks away from the start of their inaugural Florida Winter Series, which will certainly act as the spring training for next year’s national championship battle.