Carlton and Musgrave match each other in S1, Iglesias and world champ Keirle star under the lights 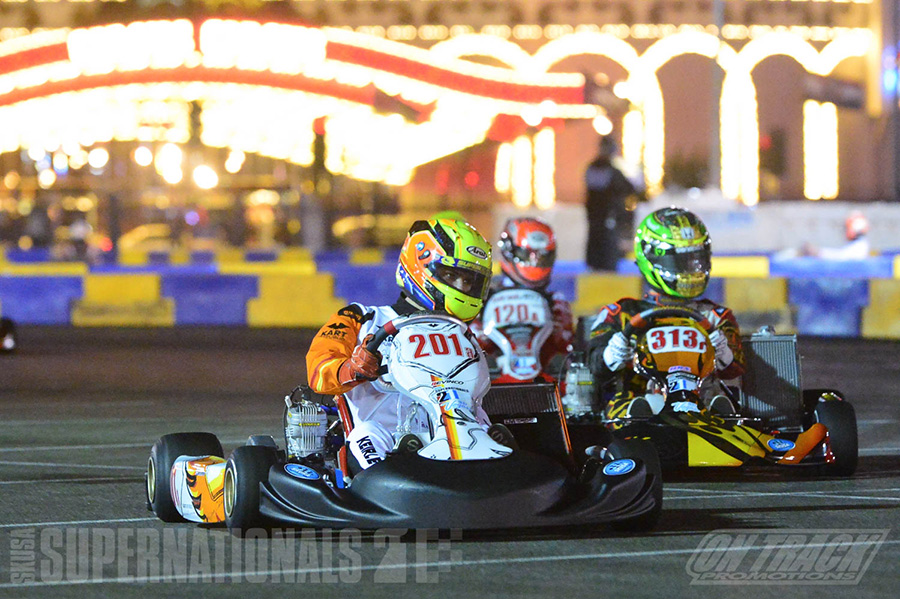 The Superkarts! USA SuperNationals is officially underway outside the Las Vegas Convention Center and Westgate Las Vegas Resort & Casino. Wednesday provided the first time the over 500 drivers in the 10 categories took to the 8/10-mile course in the new section of the parking lot with four rounds for the morning classes and afternoon divisions. Strong winds tested the competitors, staff and the many tents in the paddock throughout Thursday after a clear and perfect weather day on Wednesday. The wind did not effect the competition level, with 10 drivers coming away with the pole position for the three rounds of heat races over Friday and Saturday.

Nothing says tough competition like the S1 Pro Stock Honda division. The two quickest drivers – Gary Carlton (LEM / Formula K) and Billy Musgrave (MRC / Aluminos) each matched their fastest lap time. In true S1 fashion, the drivers laid down 2-3 laps and pulled in, knowing they had left it all on the track or lost it in a few spots on the course. Carlton and Musgrave each posted a 1:00.134 lap with Carlton’s second fastest quicker by three hundredths of a second. Former S4 SuperNats winner Matt Hamilton (Aluminos) was third, within a tenth of the top two. New SKUSA Pro Tour champion Jake French (DKC / Sodikart) put his #1 plate fourth with Taylor Greenfield (Birel ART) from Peru shocking the paddock with a P5 result. 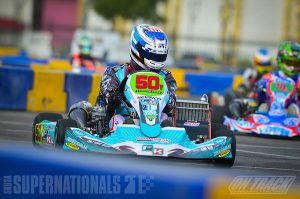 Gary Carlton tied with Billy Musgrave for fast lap in S1, winning the tie-breaker for the pole position

The X30 Junior field is a great mix of young talent, both from here in North America and around the world. Matheus Morgatto gave Russell Karting / Parolin a top qualifier honor with the quickest time in the morning session. A 1:02.263 lap helped the Brazilian edge out Barbados driver Zane Maloney (SCR / Tony Kart), making his first Junior start at the SuperNationals after placing fifth at the CIK-FIA World Karting Championships. Top American went to Jak Crawford (Nash / FA Kart), another Junior rookie, who finished the session in third. Two Brazilians made it into the top-five with Rafael Chaves Camara (NF / Kosmic) in fourth while Koene USA / Tony Kart driver Jeremy Fairbairn was fifth.

There was one clear fast driver in the Mini Swift qualifying session – Taylor Barnard. The Benik driver from Great Britain posted a 1:08.633 on his second circuit, and held the top position through to the checkered flag. SKUSA Pro Tour champion Carson Morgan improved in his third lap, moving himself up to the second spot for a Benik 1-2. Colombian Diego Contecha (Tony Kart) was third in the order with Russell Karting / Parolin driver Jace Park having his best qualifying effort of his career in fourth. Josh Pierson (Energy) was able to emerge from the ‘slow’ group to end up fifth overall, stealing the fast-five spot from Diego LaRoque (BBR / PDB).

Nitro Kart’s Frankie Iadevaia has been fast throughout the two days here in Vegas in the Micro Swift division. He continued his run at the front, posting the fast time in qualifying with a lap of 1:10.028. The field was able to close the gap in the timed session, with last year’s winner Vinicius Tessaro (NF / Kosmic) ending the session in second. Streets of Lancaster Grand Prix winner Parker DeLong (Benik) finished in third with USPKS champion Mateo Rubio-Luengo (Benik) and Miguel Costa (Benik) rounding out the fast five. 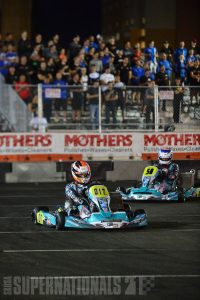 Every year, the KZ category always brings the SuperNats attendees to the grandstands and fence line. This year should be no different with 37 competitors. A familiar name rose to the top of the standings with Frenchman Jeremy Iglesias (Formula K) earning the top spot with a lap of 59.269. Iglesias is making his first start at the SuperNats for the first time since 2011. Two-time winner Anthony Abbasse was unable to match the pace, sitting second with his Sodikart teammate Bas Lammers in third. The third spot was held by American Mathias Ramirez (Andersen / Birel ART), making his KZ debut however the young driver came across the line underweight. That promoted Marjin Kremers (Ricciardo) to fourth and two-time world KZ champion Paolo De Conto (CRG Nordam) in fifth.

For the first time in SuperNationals history, the current world karting champion has started at the event. British driver Danny Keirle returned to the SuperNationals this year after making his event debut a year ago, and winning the world title just weeks ago. Keirle is part of the new Kart Republic brand, making its debut right here in Vegas under the eyes of Dino Chiesa. Keirle was able to give Kart Republic its first major pole position, earning the top spot in X30 Senior with a 1:02.291 lap. Italian Lorenzo Travisnutto made it KR 1-2. Brazilian Olin Galli put CRG into third, Canadian Samuel Lupien (RPG / Kosmic) and Austin Garrison (FW / CompKart) completed the fast-five, representing five different countries.

California ProKart Challenge champion Jason Pettit (Aluminos) bested the sold out 44-driver S2 Semi-Pro Stock Honda field for the top spot in qualifying. A 1:00.621 lap landed him the pole position for all three heat races, edging out Mexican driver Emiliano Salazar (Praga) by 24 thousandths of a second. Streets of Lancaster Grand Prix winner Kol Bailey (LEM / Praga) ended up third with SKUSA Pro Tour Riley Dickinson (DKC / Sodikart) and Rory van der Steur (FA Kart) rounding out the fast five. Rory clocked in just one lap after a broken coil wire on the grid prevented him from taking the full session, putting in one full lap before the checkered flag waved and saved his chances moving into the heat races. 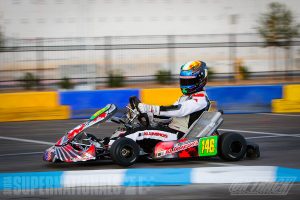 They field is super competitive in the X30 Master division, but no one was faster than defending winner Renato David (Orsolon / Birel ART). The Brazilian was able to lay down a 1:03.736 late in the session to steal the top position away from three-time winner Leonardo Nienkotter (J3 / CompKart). Brazil took the top four positions with Danillo Ramalho (Kosmic) and Paulo Lopes (Kosmic) with two-time winner Kip Foster (KSNA / Praga) rounding out the fast-five.

The S4 Super Master Stock Honda division closed out the day for qualifying, with Texan Mike Jones earning the pole position in the 25-driver field. The DKC / Sodikart driver laid down an ‘Animal Style’ lap of 1:01.389 to clear the field by three tenths of a second. Class rookie and three-time SuperNats winner Bonnier Moulton (MSquared / Tony Kart) was second in the order with John Crow (MRC / Aluminos) in third. Nick Firestone (DRT / DR Kart) and Rod Clinard (CRG Nordam) completed the fast-five with the second through fifth separated by just one tenth of a second.