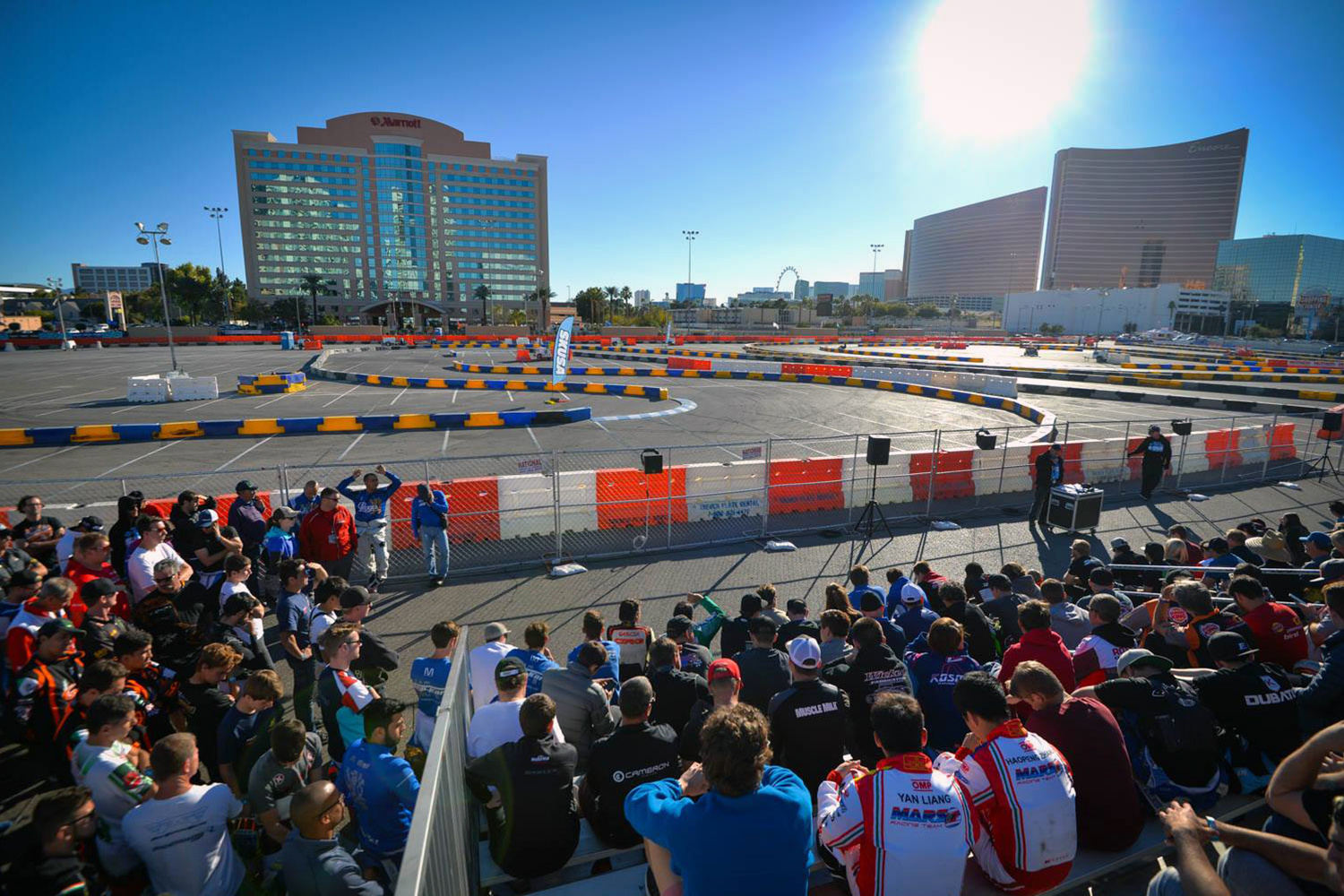 Over the last 20 years, the Superkarts! USA SuperNationals has cemented its position as the official cap to the national racing season in North America. When it comes to the event’s importance in our sport, one cannot argue against the fact that the race is unparalleled in terms of sheer size and longevity.  The event has been quarterbacked by four different leaders and it’s been run at a quartet of venues. Over the years, the SuperNationals have been challenged by copycat events that have attempted to either duplicate the experience or piggyback off the fact that so many teams will travel to Las Vegas in November. With all this turmoil, the beauty of the SuperNationals is that much like the sport of karting itself; the race has successfully evolved and persevered through many challenges. It’s bobbed and weaved over the years, and each of the four promoters did something special to bring us to the 21st edition this weekend. 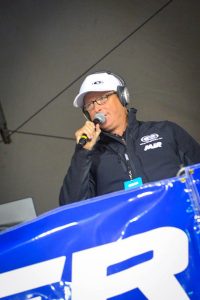 21 straight SuperNationals on the microphone (Photo: On Track Promotions – otp.ca)

For me, the SuperNationals is my favorite event of the year. SuperSunday is my Christmas Day. I’ve been fortunate to have been part of all 20 of the previous editions and I plan to be part of the next 20 as well, if they’ll have me. I just love the format, especially now that it’s back to the stand-alone status. It’s back to that ‘end-of-the-season, all-out battle’ that was the race’s initial DNA. During the first years of the SuperNats, when the races was strictly gearbox classes only, we referred to the race as the ‘US Open of Shifter Kart Racing’. It was truly open for everyone. The event drew the top drivers from the assorted SKUSA regions, and from the IKF and WKA as well.  It always attracted a large and competitive contingent from Canada as well.  The international drivers didn’t come until the Sam Boyd Stadium years, after US karting adopted the ICC powerplant, and we’ve enjoyed their participation ever since.

This race is the big one, the ‘must-do-at-least-once’, the bucket list race in American karting. It’s a battleground, and it’s an experience. To illustrate its position in the sport, the SuperNationals has attracted the likes of Michael Schumacher, Jamie McMurray, AJ Allmendinger, Will Power, Sebastien Bourdais and Travis Pastrana.  Teams spend all year developing their drivers and a month or more preparing equipment for the race. It’s a monumental task in terms of logistics and travel. Squads from the East Coast will trek 40+ hours one-way to arrive at the venue and begin set-up, which takes a full day itself.  Participating in the SuperNats demands full commitment and hours of planning and preparations.

If bringing a team to the SuperNationals is a challenge, take the time to consider how much of an effort the Superkarts! USA staff puts into the event to make it a reality. It all starts with a team of 3-4 people, led by Tom Kutscher and Stan Bryniarski, who make at least four trips to Las Vegas during the year to recon the facility and meet with suppliers. This is just the start of a six months of work to make it all come together on SuperSunday.

I’ve had the opportunity to see the budget for the race, and it’s mind-boggling. When you think about the overall budget for the event, it’s fairly easy to estimate the gross revenue from the entry package fee after you deduct the base costs of the product that is included (tires, fuel, oil etc).  But once you have that initial revenue number, you then need to consider the massive expenses on the other side of the spreadsheet. Let’s have a look at a few of them, many of which you would likely either underestimate or not even consider, just to give everyone a better idea of the money that leaves the register to make this race the incredible experience that it is. 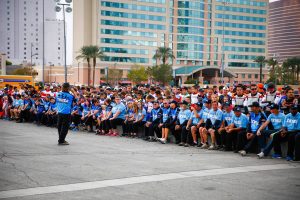 In addition to welcoming over 500 drivers, SKUSA brings in over 100 workers to provide the best event possible (Photo: On Track Promotions – otp.ca)

SKUSA employs over 120 staff members during the race. A core team of 20 workers begins 10 days ahead of karts even turning a wheel on-track. There’s also two shifts during the event so any track and barrier repairs can be completed to make sure the track is ready for the next day of competition. The remaining crew of 100 rolls in this week, so calculate flights, shuttles, rental cars, hotel nights and food for everyone.  A quick number to absorb is that SKUSA spends over $6000 per night simply housing their staff, which adds up to over $50,000 for the entire event.

Setting up the track is obviously a major component of the event cost. Aside from the base cost to rent the parking lot itself (which we’ll leave to SKUSA), the simple track layout costs over $40,000, a sum that includes $20,000 for the rental of the large hydro barriers and $13,000 to truck in the Scribner barriers that SKUSA already owns. The popular poured concrete curbing, which Kutscher introduced in 2013 at the Rio, comes with a $6,000 invoice. SKUSA has rented a total of five grandstands for this year’s race, and they come with a $3000 per set price tag.  This year, SKUSA will spend $15,000 on grandstands.

There’s over a mile of fencing in use to secure the property and the track, which comes in at around $15,000, and rental and construction equipment is another $38,000. The porta-potties are emptied and cleaned for $500 per day charge, and security and police require another $25,000 investment.

With all this laid out, it’s actually the unknown costs that lower the SuperNationals’ value to SKUSA as a revenue-generating event. There’s always post-race parking lot clean-up charges for the teams who leave their areas is disastrous shape, covered with tires, fuel cans, cardboard and a layer of snipped zip-ties, but SKUSA never knows the extent of the clean-up or what the final bill will look like. 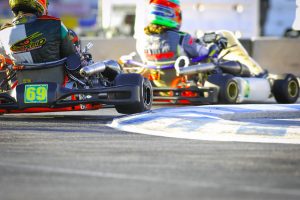 Curbing is just a small portion of the many expenses it takes to create the SuperNationals from the ground up (Photo: On Track Promotions – otp.ca)

Despite the fact that there is an unwavering commitment to their marquee race, as evidenced by their dedication to the work required, the SuperNationals generates the least amount of profit among the four SKUSA national events. The revenue is high, but this is almost fully off-set by the expense, which includes the cost to film and air the race on the CBS Sports Network. So if the race isn’t a huge money-maker for SKUSA, then the question remains, why would they put in the ridiculous amount of work to put the race on?  Simply put, the SuperNationals is the program’s marquee event, it’s the biggest race of the year, and it’s huge for the sport and the teams involved. This fact is not lost on Tom Kutscher, who enjoyed the event as a racer and as a team owner before purchasing SKUSA.

The SuperNationals is an incredibly important event in terms of the financial bottom line for many of the shops and teams. It’s a massive influx of revenue at the very end of the year, which is so important. The mass arrival of international competitors fuels countless arrive-and-drive programs under the biggest tents in the paddock, pairing a team’s regular drivers with those coming in from all over the globe. The race is just over a month before the WKA KartWeek and six weeks from the SKUSA Winter Series firing up in Florida, so the revenue is timed well, allowing teams to bridge through the holidays to the new season.

The bottom line here is that the SuperNationals is great for the industry, a bucket list experience for the racer, an event with extremely low ROI for Superkarts! USA, and one of the best weeks of the year for me.

Best of luck and safe racing to you all!