Bonnier Moulton and Terry Riggins acknowledged for 20+ years of performance 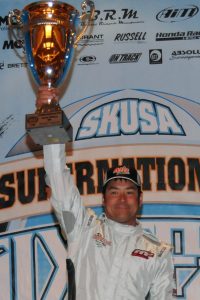 “When you look at the 25-year history of Superkarts! USA, there’s a very small group of people who have been involved with the organization for over 20 years,” offered Tom Kutscher, SKUSA CEO. “Bonnier was a player from the very beginning of the ProMoto Tour. He’s raced in every SuperNationals and is part of a short list of three-time winners. Terry is part of SKUSA’s foundation and has played pretty much every role within the organization from driver to race director to regional promoter. These guys are ‘legend’ material when it comes to SKUSA history.”

Bonnier Moulton has been a Superkarts! USA competitor for over 20 years, finishing on the podium in the very first SuperNationals in Las Vegas in 1997.  The Utah resident has participated in all 20 editions of the great race and is a three-time winner at the annual season-end event, claiming his first victory in 2004 in the Formula G1 class at Sam Boyd Stadium. Bonnier was back on top of the podium seven years later as he followed up with back-to-back S4 wins in 2011 and 2012 at the Rio. Moulton will be back on track again this year, running in the S4 Super Master class. Moulton also competed in the headline Formula S1 category in the inaugural season of the ProMoto Tour in 1999, finishing tenth in the overall points.  Bonnier is now a well-respected tuner and driver coach, and has also been part of the SuperNationals track design team for the last two years, adding to his deep connection to the event. Moulton joins Alan Rudolph in the SKUSA Hall of Fame in the Driver category. 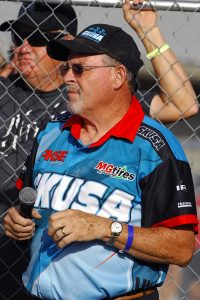 Terry Riggins has worn many hats within the Superkarts! USA family, and has been a fixture in Midwest karting since the 1980s, as he is today. Terry was a SKUSA Regional Director from the late-90s through to 2007, taking the reins of the flagship SKUSA Great Lakes program from Don Janowski and Jim Murley to manage with his wife Shirley. He was a key component in the famous ‘A Team’ that reset the bar for event management in the late 1990s and early 2000s, with Murley at the helm. Terry has logged time as the SuperNationals Race Director and was also the first SKUSA King of the Streets Race Director in Oklahoma City. For the last five years, Terry has been integral part of the SKUSA National staff. When it comes to Superkarts! USA racing, the name ‘Terry Riggins’ is virtually synonomous with the brand.

Superkarts! USA is proud to add both Bonnier and Terry to the Hall of Fame, and we look forward to honoring them both during the opening ceremonies of this year’s SuperNationals on SuperSunday.