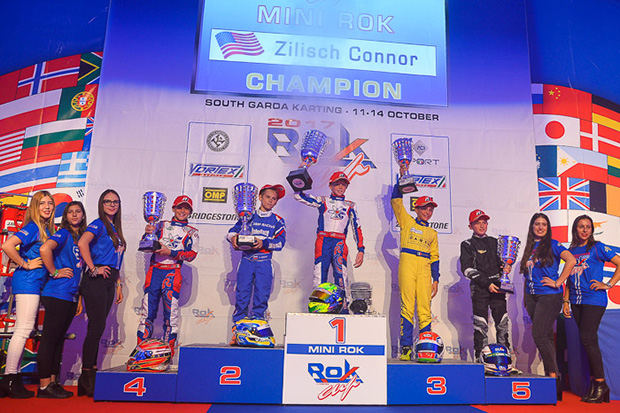 A long standing developer of talent, the Energy Corse team has helped launch the career of many drivers. Some of them are now on the verge of entering Formula 1. Although the search for the best performance and the development of the equipment is incessant, the training of young people is not forgotten within the Italian team. After the competitiveness displayed in the CIK-FIA races, the Energy chassis achieved more top performances, this time in the International Finals of the IAME X30 and Rok Cup Challenges. While Brent Crews won the X30 Mini Final at the Le Mans circuit, Connor Zilisch celebrated his success at Lonato in Mini Rok, in a category of 162 drivers!

More than 1000 kilometres separate Le Mans from Lonato, but one point in common was gathering them on the weekend of 14th and 15th October, 2017: it was enough to look at the front of the field to find the Energy Corse chassis in the Mini classes reserved for young drivers: two chassis in the top four in Italy and three in the top six in France. With the victory in both cases! The rigour, professionalism and knowledge of Energy Corse still paid off. “It’s all about a lot of little things,” commented team manager Mick Panigada. “At Energy, we leave nothing to chance! As for these excellent results at Lonato and Le Mans, they are also the consequence of our strong partnerships with the Energy Corse teams and distributors all over the world, in the United States especially, in view of the successes of Zilisch and Crews in Rok and X30.”

Rok Cup: Energy chassis complete the race in the lead

With 166 drivers at the start and identical Vortex Mini Rok engines for all, it was not easy to make the difference, to qualify for the Finals, to reach the podium and if possible the top step. At the end of a superb duel in the leading group the three Energy chassis of the Polish Karol Pasiewicz, Americans Luca Mars and Connor Zilisch, the former crossed the line 1st, before being penalised for a non-compliant spoiler position. Zilisch recovered the victory after a finely-honed Final.

Thanks to a magnificent gain of 10 places, Luca Mars finished 4th. Although Karol Pasiewicz (V-Kart Racing Team) was demoted to 8th, the Russian Maksim Soldatov returned to 13th, bringing the number of Energy chassis in the top 15 to four! There was also Matteo De Palo (ASD Giugliano Kart) in the Final and Russia’s competitive Andrey Zhivnov, who was unlucky at Lonato.

With Ugo Ugochukwu and Brent Crews, the Energy chassis dominated the IAME International Final at Le Mans in the X30 Mini. The former won two races out of three and started on pole in the Prefinal, then it was Crews who won the Final, starting in pole position. Ugochukwu missed out in the “slow” procedure that started at the halfway point, which probably left him without a podium. But after his victory at the IAME International Open at Castelletto in April, Ugo Ugochukwu won the 2017 X30 Mini Cup, awarded for the aggregation of both races.

At Le Mans, there was a second driver in Energy Corse colours in 3rd position, with Estonian Patrick Hakala (Dan Holland Racing). Despite his young age (nine years), Jimmy Helias has fully exploited the qualities of his equipment to return to 6th. There was less success on the other hand for Estonian Ken Oskar Algre, who was excellent in Qualifying.

With 10 chassis entered, the Italian brand was also the best represented, proof of its attractive and efficient attributes, constantly highlighted by several teams and drivers in the X30 Mini category.

After a season in which he was often featured with his Energy-TM package, the Dutchman Martijn Van Leeuwen was one of the most prominent drivers at the 2017 CIK-FIA International Super Cup at Wackersdorf. Constantly in the top five in each of his six qualifying heats, he completed a superb Final to finish 6th.

This last part of the season was also marked by the performance of the Energy Corse team at the 24 Hours of Le Mans Karting (CIK-FIA Endurance Championship), contested with Parilla OK engines. For its first official entry, the Italian team was placed 5th with Joel Johansson, Marco Signoretti, Ross Hayes and Tony Lavanant, thanks to a steady and consistent pace.