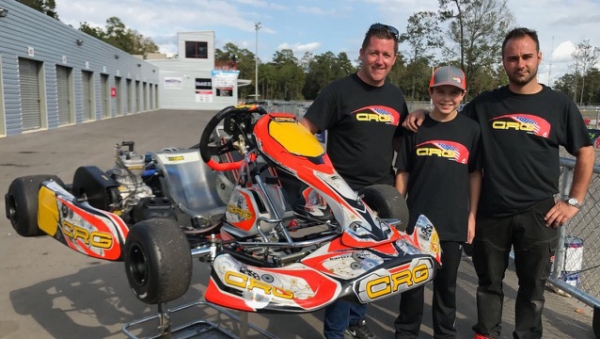 A few days before the important SKUSA Super National of Las Vegas, CRG is delighted to announce the young American Tyler Maxson as one of the works drivers of the Racing Team.

This is quite a hit for CRG at the eve of the race in Las Vegas eying season 2018, when the young talent from Georgia will be competing in USA among the fields of CRG Nordam and in Europe within CRG’s Racing Team.

Born in Lawrenceville in October 2004, Tyler is one of the Junior drivers that came to the fore in America. He won the 2017 ROK USA, took two wins in WKA Man Cup IAME and scored several podiums in USPKS and SKUSA races, class Iame Junior. He had previously dominated the scene of category Mini Swift at the SKUSA Pro Tour and won the National Mini Rok title.

The agreement signed with CRG will definitely give a boost to Tyler’s karting career, as he will have the chance to benefit from the team’s technical support and training, in one of the most professional and successful karting realities in the world, as a lot of motorsport champions did competing in karting with CRG before him.

Tyler has already run some tests with CRG Nordam. He has positively impressed the technicians of the Italian outfit due to its speed and accurate feedback regarding setup regulations. The racing debut with CRG will take place next November 19th in Las Vegas at the 21st SKUSA Super National, category TAG Junior. In 2018 Tyler will take part in a double program in Junior, both in USA and Europe.

In the US, Tyler will be part of the CRG Nordam team competing at the main events in Junior, while he will also contest CIK-FIA events (European Championship and World Championship) in Europe with CRG’s factory racing team in OK Junior.

CRG Nordam’s President Eddy Tinini commented Tyler’s arrival in this way: “Tyler is going to be a great ambassador to our brand, especially on the American market, where we are doing an excellent job from a sporting and commercial view point with CRG Nordam. We believe his experience in Europe will be fruitful for both parties. We are really happy for what seen in the first test and we are working to prepare the debut race in Las Vegas and the next season that is definitely going to be quite challenging.”