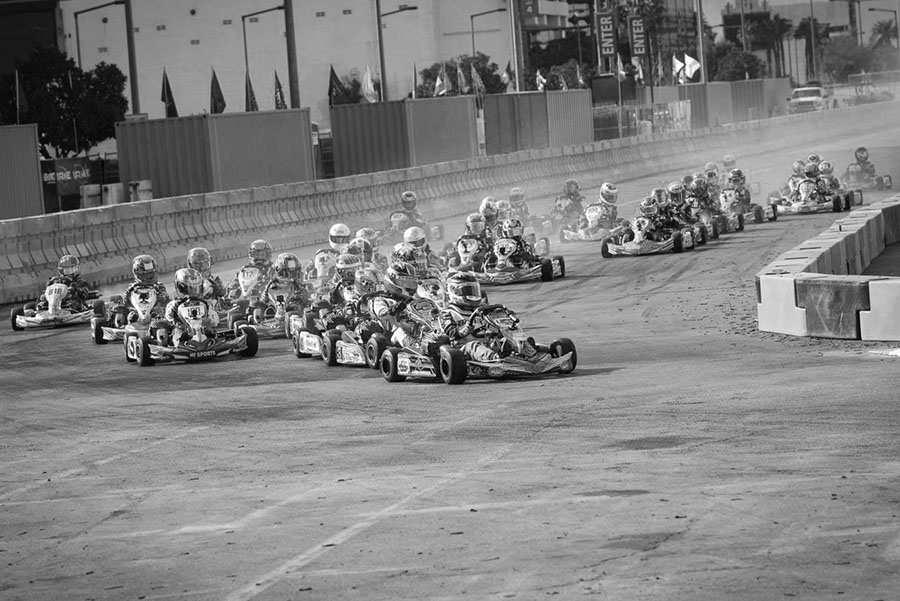 The 2016 edition of the Mini Swift class battle at the SuperNationals kept parents and the fans on the edge of their seats until the final corner, with the race won at the line by Canadian Thomas Nepveu. Last year’s field was full of ‘veteran’ Cadet drivers although many of them moved up into the Junior ranks for this year or have done so prior to the SuperNationals. As a result of the mass graduation, the field this year has 40 drivers making their first start at the Las Vegas spectacular, bringing in a concern for those not familiar with the temporary circuit style of racing. The talent pool is still up there, as it is every year, with nearly half the field coming in from outside the United States. 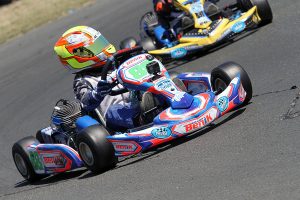 SKUSA Pro Tour champion Carson Morgan will be among the many contenders in Mini Swift (Photo: EKN)

Leading the near 70-driver field is 2017 SKUSA Pro Tour champion Carson Morgan. Two wins at the SpringNationals helped to put the Benik driver at the top of the standings heading to the SummerNationals. Two podium finishes at the New Castle finale secured the title for the California driver, who turns 10 just days before hitting the track at the SuperNationals. Carson is the only returning driver from last year’s podium, where he placed fourth. THis further puts the odds in his favor to come away with victory in 2017.

Two others won twice on the year. Luca Mars won both main events at the WinterNationals in New Orleans, but he will move up to X30 Junior in Vegas. The other double winner was SummerNationals victor Diego LaRoque. Now a two-time SKUSA Pro Tour championship podium finisher, LaRoque (PDB) is among the top Cadet drivers in the United States. The 2016 Rotax world title winner is primed to challenge for the victory at the SuperNationals, now carrying the SKUSA #3 plate. 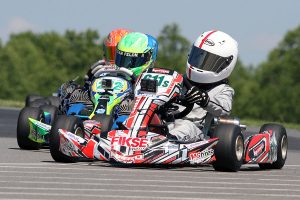 The Mini Swift field will include two other world title winners, both hailing from the United States. Brent Crews came away from the IAME International Final in October as the inaugural event champion in the Mini category. Crews has won championships at the USPKS program in back-to-back years, with the nine-year-old making his first SuperNationals start this year, leading the Nitro Kart squad. Connor Zilisch won his world title on the same weekend at Crews, but in Italy at the Rok Cup International Final. Winning the Rok Cup ticket through the WKA program, Zilisch (Energy) bested 162 drivers to become only the second USA driver to win the event, joining Logan Sargeant who was victorious in 2011. Zilisch is making his first SuperNationals start, as well.

Santiago Trisini (Benik) crossed the line at the IAME International Final as the provisional winner, however, a bumper penalty took the victory away. The Venezuelan driver who calls Florida home will take that disappointment and hope to turn it into triumph at the SuperNationals, looking to improve a 24th place finish from a year ago. Two drivers will be making the trip to the Rotax Grand Finals in Portugal prior to the SuperNationals; Crews and Josh Pierson. Pierson, an RPG / Kosmic pilot, is the Can-Am Karting Challenge champion, is tasked with a busy two weeks ahead of him. Other notables in the field to watch include Nicholas Terlecki (Merlin), who finished eighth a year ago, and WKA champion Ashton Chilton (Nitro Kart). 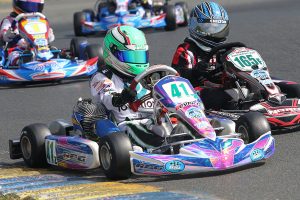 Josh Pierson is among the handful doing both Rotax Grand Finals and SKUSA SuperNationals for Team USA (Photo: EKN)

Nine drivers are making the graduation from Micro Swift to Mini Swift class this year. Among them is last year’s runner-up Freddie Slater (Benik). The British driver turned the quickest lap in the Micro Swift main event, and is set to make his Mini Swift debut at the SuperNationals. Last year’s SKUSA Pro Tour Micro Swift champion Kai Sorensen (Energy) is coming into Vegas with some momentum. The beginning of the rookie year was a rough start, be he improved his results by the SummerNationals and wrapped up the California ProKart Challenge championships with a dominating victory at the Streets of Lancaster Grand Prix. The third ProKart Challenge champion in the field is Texan Chase Gardner. The first-time series champ is running under the new VemmeKart USA banner in Vegas.