CRG Protagonist but a Bit Unlucky at the Trofeo Delle Industrie 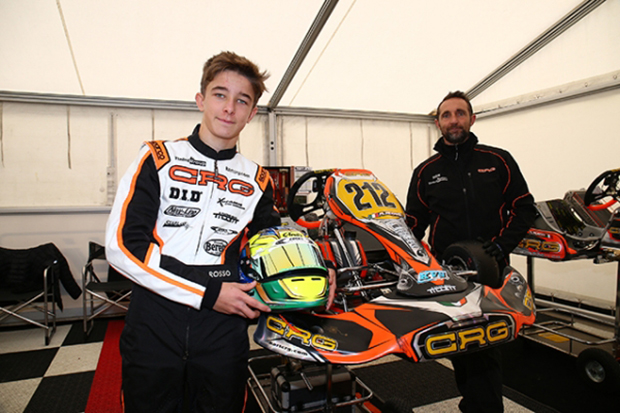 Andrea Rosso made a great debut with CRG in OK being very quick. Fabian Federer did not start well from the pole position in KZ2 but ended fourth in the Final. Gabriel Bortoleto could not get the most of a good start to the weekend in OK-Junior.

Edition 46th of the Trofeo delle Industrie held in Lonato at the South Garda Karting Circuit did not smile to CRG colors, despite giving productive feedback for several drivers competing on the chassis made by the Italian company.

Andrea Rosso (CRG-Parilla-Vega) made his deubut with CRG in OK and confirmed to be very quick and could have won the race organized by Parma Karting had he not slipped in some pitfalls, like the 10s time penalty he was handed in Prefinal due to the dropped front fairing on his kart or the incident in the Final when chasing P2 after an exceptional comeback race. Rosso was the quickest after heats though, but he had eventually to settle for P5 in the Final, posting the quickest lap of the race and displaying an overall good speed. Among CRG drivers,  Michael Rosina managed also to take a top ten finish in P10.

In KZ2, Fabian Federer, started the Final from the pole position on CRG-Tm run SRP Racing Team. He had been among the absolute protagonists of the event winning the Prefinal after clinching P2 in the heats and being the quickest of Group 1 in qualifying. Unfortunately, Federer did put in a good getaway in the Final and threw away a victory that seemed at reach in this way, closing his effort in P4, leading CRG Holland’s Benjamin Tornqvist after a great comeback race.

Alessandro Giardelli is proving to be a strong interpreter of KZ2: he was quick in qualifying posting the fourth time of Group 2 and then showed good speed in the race taking P10. Andrea Dalè (Nuova 3M) has also been shining for CRG colors taking the eleventh place, while the Brazilian Gaetano Di Mauro was 19th in the Final after recovering ten places. Filippo Berto had an unlucky debut with CRG and was forced to an early retirement form the Final, as Daniele Vezzelli who run a great Prefinal, while Marco Valenti could not go beyond the second chance race, despite showing an improved competitiveness. The French Emilien Denner run a very strong race on Kalì-Kart, despite losing some positions especially in Prefinal, after a promising P13 in qualifying. He eventually closed his weekend in 23rd place.

The best of CRG drivers in OK-Junior was the Spaniard Javier Sagrera of M2 Racing Karts, who was seventh in the Final, while the Brazilian Gabriel Bortoleto could not get the most of the weekend that started well with a good fourth place in Prefinal and ended 11th. Some hiccups prevented Luca Giardelli and Leonardo Bertini Colla respectively to go beyond the 15th and 16th place. Mathias Torreggiani was handed a 10s time penalty that relegated him to the final 23rd place.

Alfio Spina has been the best of the 60 Mini drivers on CRG, but CRG Gamoto’s driver had to settle for P6 this time around, a result that confirms him among the strongest of the category though. The American Akshay Bohra ended also in the top ten in P9.