As the summer racing season comes to a close in the U.S., the United States Pro Kart Series (USPKS) presented by MG Tires and IAME USA East is busy preparing for its sixth season of competition.  And, as everyone knows, the first step in producing a great race series, is producing a great schedule, which is exactly what USPKS has done.

The 2017 season had tons of great racing at every event, but the Series felt that something needed to be done to address the over-saturation of the karting market in the U.S.  The time and money necessary to compete in the all the events that are offered today, is just something that most karters cannot afford.  To that end, the USPKS has opted to reduce its schedule from four race weekends to three.  The hope is that this will give karters an opportunity to compete for a full season in a top level national karting series, without having to over-extend their other commitments.  USPKS would also like to thank those that offered suggestions and comments on where they would like to race.  It was much appreciated.

With only three weekends to work with, the USPKS had to make every venue count, and feel that this combination is one that racers will truly enjoy and look forward to.

The 2018 United States Pro Kart Series will open with its first ever visit to Florida, and to the very popular Ocala Gran Prix, on April 6-8, 2018, for the Southern Grand Prix.  OGP has been a fixture in Florida karting for over 17 years and is well known for running great programs.  The USPKS is looking forward to showcasing its program and its racers to the Florida crowd.

After a short break to get school wrapped up for the summer, the USPKS will make its way back to the popular GoPro Motorplex in Mooresville, NC for the second edition of the Carolina Grand Prix on June 15-17, 2018.  Mooresville has really taken over as the “go-to” track in the Eastern portion of the U.S., and it’s a racer favorite.  This coincides with Father’s Day, and what better way to spend the day with Dad, than at the track.

And finally, the USPKS will conclude the 2018 campaign at the high speed New Castle Motorsports Park on July 27-29, 2018 for the second edition of the Hoosier State Grand Prix.  NCMP is always a great host and has an outstanding facility and staff.  This will also be the site of the USPKS Champions Award Presentation, following Sunday’s racing program.

The complete class lineup for the 2018 United States Pro Kart Series is still being finalized, but will be available shortly, along with any Tech Updates.  However, the USPKS wants to let the competitors know now that the Yamaha KT100 will be ending its run with the series, and is not in the 2018 class structure.  The handwriting has been on the wall with the Yamaha for some time, and the class is simply no longer feasible in a national program. The USPKS would like to thank all of the past Yamaha sponsors and competitors and hope that you will join them in one or more of the new IAME based classes.

The United States Pro Kart Series sincerely hopes that the program is part of everyone’s racing calendar in 2018 and beyond.  For more information, visit www.uspks.com or follow them on Facebook. For sponsorship information, please contact Series Director Mark Coats at (217)652-6275 or via email at mcoats.uspks@gmail.com. 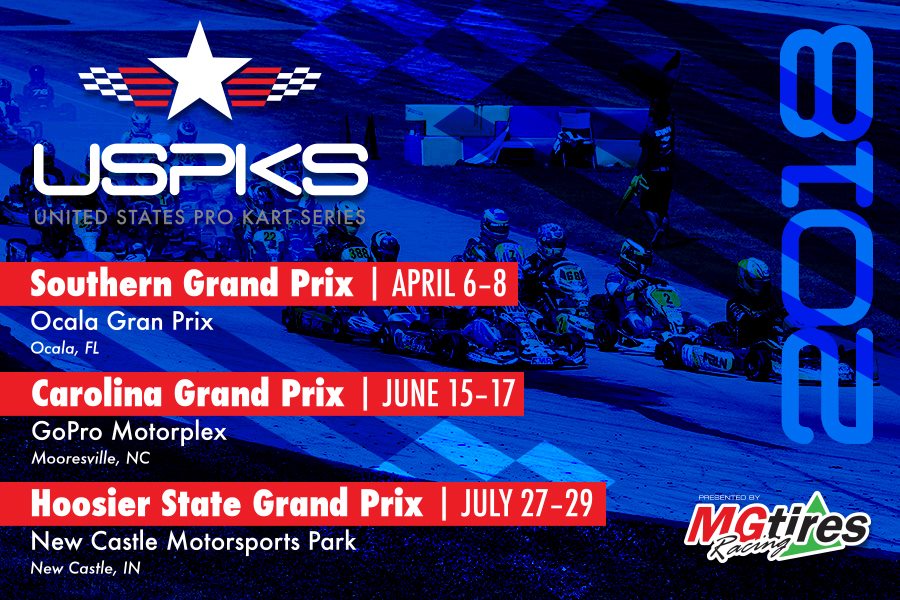