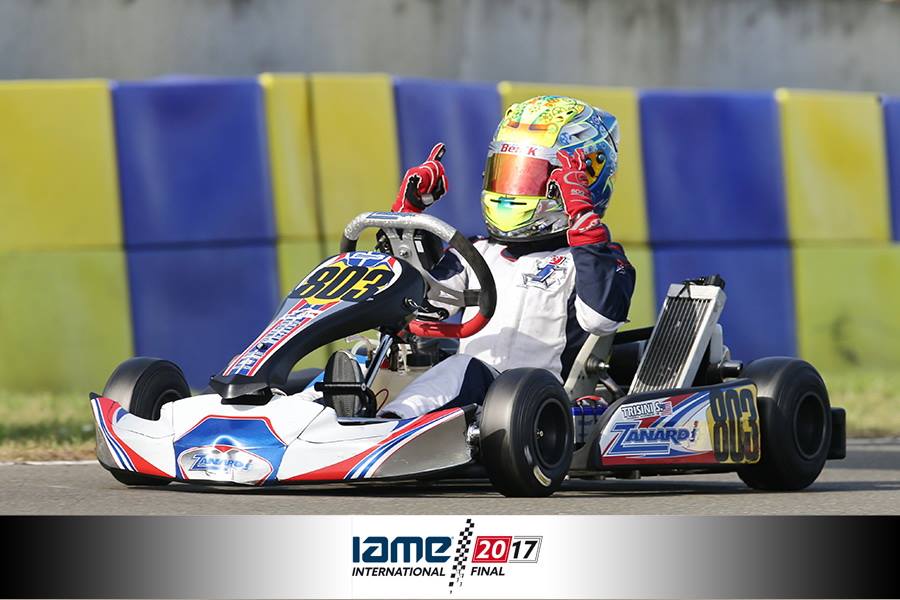 Santiago Trisini was the first to cross the line but was relegated to the Vice-Champion position post race
(Photo: IAME International Final)

Santiago Trisini returns home from Europe after an exceptional performance at the IAME International Final in Le Mans, France. The young American driver battled on the French circuit with the world champion Chiesa Corse team on a Parolin chassis racing in the IAME Mini Swift category. Although luck was not on his side, Santiago proved to be resilient, remaining one of the strongest and fastest drivers in the class throughout the world class event.

Santiago joined the Chiesa Corse team for the first time in Le Mans. The team did not know what to expect from Santiago, but after a few sessions on track, he proved that he harbored impressive driving skills with the speed to back it up. Santiago’s skill and strong, happy attitude, along with the team’s expertise and confidence made them a winning combination.

Santiago kicked off his weekend with a second place qualifying effort, but received a penalty following post session technical inspection, moving him to the rear of the field for the heat races. In heat one, he drove from his last place starting position in 36th to 17th, then received a penalty at the end of the race that moved him back to 28th. He continued to move through the field in heat two, finishing in the 12th position. In heat three, he was able to pick up a few positions after an accident at the beginning of the race, finishing 32nd.

The team was confident that Santiago had the speed to be at the front of the field in the final. Set to start 26th, Trisini remained mentally strong and confident heading into the prefinal, despite the mixed luck he had during the heat races. He drove a great race, setting the fastest lap and gaining 15 positions, setting himself up to start 11th in the main event.

Santiago was all business in the final, making his way into the top-five by the second lap. By mid-race, he was running in the second position and ready to attack for the lead. There was an unexpected mid-race slow down, causing contact between the top three drivers. The race went red briefly, causing a mid-race restart for the field. Santiago restarted the race in the third spot and began battling for the lead right away. He made a pass for the lead a few laps into the restart and never looked back, taking the win with a large gap on the field. After the race, Santiago was assessed a bumper penalty from the contact earlier in the race, causing him to finish in the second spot for the vice championship.

Despite the hard luck, Santiago ended his weekend on the podium with a second place finish at the IAME International Finals after an unlucky bumper penalty. He walked away from the event with great experience and strong results. It has been a great season for Santiago, adding many great accomplishments to his resume. He heads into his last cadet race of his career next month at the SuperKarts! USA (SKUSA) Supernationals 21 in Las Vegas, Nevada, hoping to continue his strong performance from France on his home turf.