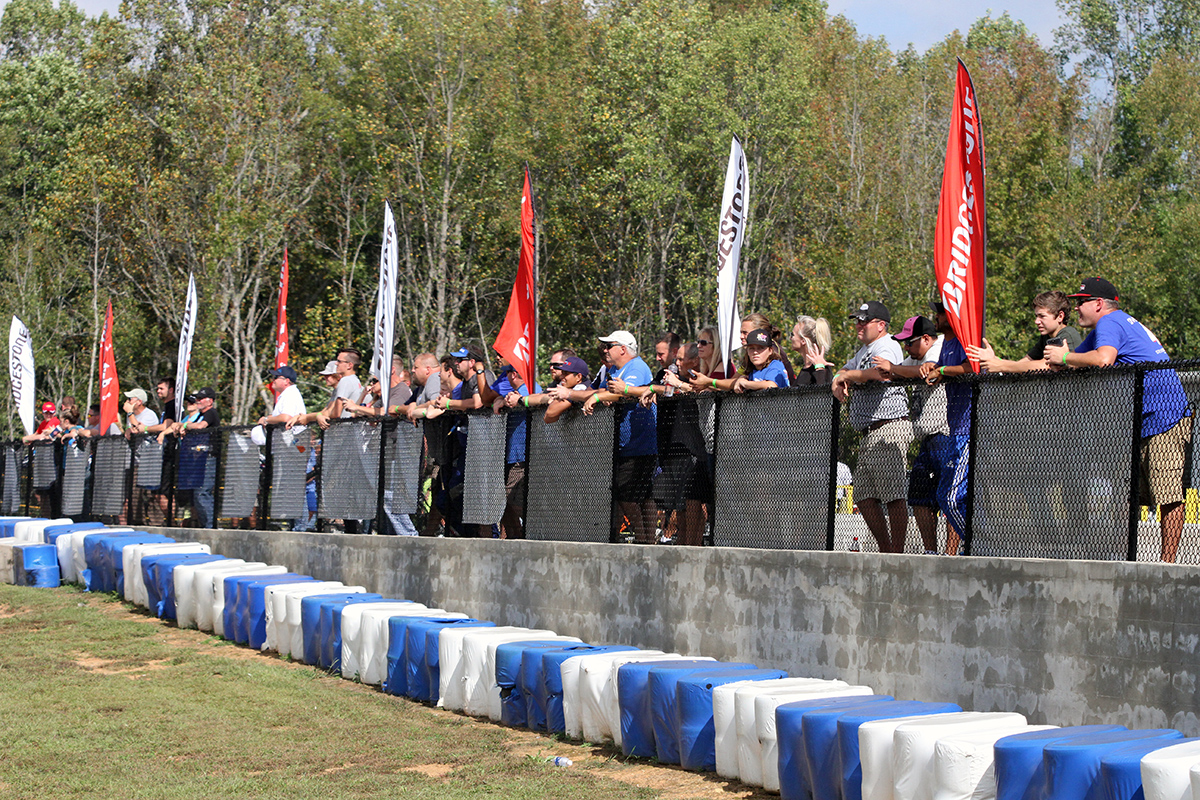 The 2017 WKA Manufacturers Cup Series closed out its 2017 season at the GoPro Motorplex in Mooresville, North Carolina in mid-October with the running of the Top Kart USA Grand Nationals. A solid turnout of 150 entries was logged in the eight championship categories, in addition to one local option division. The paddock enjoyed great weather following morning showers that opened up Friday’s practice. Saturday and Sunday had morning clouds and fog before the skies cleared to make way for bright sunshine as the competitors battled around the 7/10-mile circuit that is designed after the famed Kartdromo Parma in Italy. 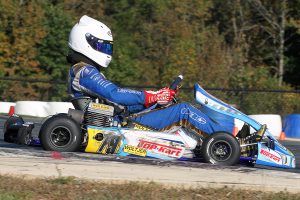 For the first time in recent history, no one driver came away from the season with double championships, however, a pair of drivers left GoPro with two WKA Eagle trophies for winning the Grand Nationals both days in their respective categories.

Dakota Pesek has been the driver to beat in Yamaha Senior all season long. Last year’s champion Braden Eves had the best point total following eight rounds of racing despite just two race wins. Pesek, however, had the most wins and podium finishes, winning four to go with three other top-three results. The only blemish for Dakota was the opening day in Daytona when he had to pull off with a mechanical issue. The Top Kart driver from Ohio bounced back the next day to secure victory. An emotional victory in Pittsburgh following the loss of his father Kevin triggered a three-race win streak. Pesek came up short in Dousman to Alexander Kardashian and Eves, which set up for a three-driver battle for the championship in Mooresville. Eves elected to take a trip to Italy and compete at the Rok Cup International Final that weekend, leaving Kardashian as Pesek’s only threat. Kardashian gave his best effort, stealing a heat win on Saturday and stomping him on Sunday in the Prefinal. That said, Pesek proved too determined and destined to finish the year on top, winning both Finals to take home two WKA Eagles and lock up the 2017 Yamaha Senior championship. 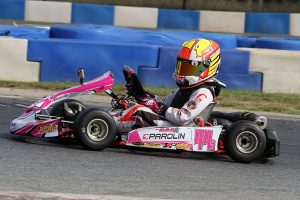 At the other end of the class structure spectrum, the youngest division has numerous drivers developing into future champions in the sport, and in motorsports in general. In the Mini Swift category, Caleb Gafrarar produced similar numbers to what Pesek did throughout the season. The Russell Karting / Parolin driver scored the opening round victory in Daytona ahead of 34 drivers. He followed it up with victory in the rain at Pittsburgh to help put himself in the title chase. A poor outing at New Castle put him back in the hunt, but he bounced back in Wisconsin with two podium finishes, including a win on Sunday. Racing at his home track in North Carolina, the odds were in Gafrarar’s favor. Saturday was dominated by Sofia D’Arrigo, but she was found non-compliant in tech and, as a result, Gafrarar was gifted the victory. On Sunday, Caleb was determined to win on his own, taking the Prefinal. D’Arrigo and Sebastian Ng made it a battle, with Gafrarar pulling off a ‘Cole Trickle’, passing D’Arrigo on the outside into turn one on the last lap. The two wins helped Gafrarar lock up his first WKA Manufacturers Cup Series championship. What was even more special was the pink graphics kit that he carried on the weekend in admiration and thankfulness of his mother Jacqueline, who is now a 16-year survivor of breast cancer.

Locals Came Out to Play 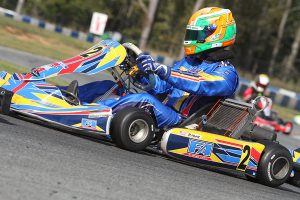 Blake Hunt was among the local drivers to shine on the weekend (Photo: EKN)

Aside from Gafrarar, many local drivers filled the grids in all the categories. The IAME Senior class welcomed a boost in numbers thanks to the many local and regional racers from the area. Ashley Rogero (FA Kart) was third on Saturday and Blake Hunt (FA Kart) was the top local on Sunday with a photo-finish runner-up. Georgia driver Cade Downes (CompKart) was third in IAME Junior on Saturday, placing fifth on Sunday as the top non-series regular. Pro Swift Sportsman also featured many local and regional drivers in the field. Tyler Wettengel (Benik) was fourth on Saturday with Spencer Lofton (Nitro Kart) placing fifth.

Locals were not the only newcomers, as a couple of Canadians came down to play. Dale Curran was among the top contenders in IAME Junior, just missing out on the podium. Ryan MacDermid was second and third in the IAME Senior main events, nearly taking the overall weekend award. For years, many Canadians have traveled south to compete in the WKA Manufacturers Cup Series, but it has not been a trend of late. It was great to see a handful come down to Mooresville and the series hopes to see more in 2018. 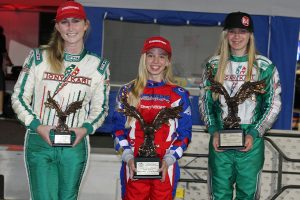 From the great announcer Ken Walker… ‘GIRL POWER!’ The female drivers stood out during the weekend at the GoPro Motorplex, reaching the podium in all four age levels of the IAME categories. As mentioned above, Ashley Rogero returned to the seat and challenged for the top spot all weekend long. Teamed with her father Jim Rogero, the two looked like the same dynamic duo we saw climb the karting ladder from the Cadet ranks to racing at the international stage over the past decade. Rogero had a best finish of third on Saturday, coming up just short of the podium on Sunday.

Grabbing her first WKA victory of her career was Gray Leadbetter (Tony Kart). Coming off her first USPKS victory in September, Leadbetter enjoyed the home track advantage and grabbed the victory on Saturday in a stellar performance against the championship contender Pauly Massimino and others. On Sunday, she nearly grabbed a second victory, coming up just short to finish runner-up, earning the overall weekend award.

All season, Annie Rhule (Energy) was on the verge of earning her first WKA victory in the Sportsman division. Rhule was sixth after qualifying in Pro Swift Sportsman, only a tenth off the pole time. She came through to win both heat races, starting on the pole position for the main event. She led the entire way with Nitro Kart drivers Ashton Chilton and Frankie Iadevaia closing up at the end. Rhule held on by 83 thousandths of a second to secure her first WKA victory. She added a fourth on Sunday, earning the overall weekend trophy in addition to two third-place finishes in Yamaha Sportsman.

It was an up-down-up weekend for Mini Swift driver Sofia d’Arrigo. The Nitro Kart driver swept the action on Saturday, provisionally locking up her first WKA victory. She would be removed from the results on the day after tech inspection. The young driver bounced back the next day, climbing her way up through the field to challenge for the victory on Sunday. She led for a few laps, settling for third to grab her second podium finish in three WKA races. 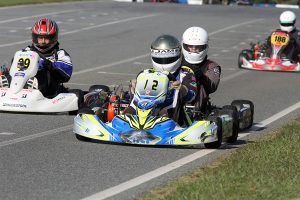 Briggs 206 Senior category is 1 and done with the Manufacturers Cup Series (Photo: EKN)

The 2017 season introduced the Briggs 206 Senior class to the championship program. The 2015 Daytona KartWeek event welcomed 40 drivers to the ‘local option’ class, and the Briggs 206 engine package continues to draw large numbers at the local and regional level. The WKA’s thought in adding the class to the Manufacturers Cup was to provide competitors with a ‘low cost’ race package in an attempt to attract those local racers to be part of the WKA championship events. Daytona drew big numbers as expected – 32 entries – however, the class did not see a large number of entries in the following races, including a season low of just two at the Dousman event, which is just miles away from the home of the Briggs & Stratton Racing world headquarters. The 2017 season closed at GoPro Motorplex with just one driver competing in all eight rounds – Eric Fagan.

WKA has already announced that KA100 Senior will replace the Briggs 206 category in 2018 for the Manufacturers Cup Series, removing the 4-Cycle class and making the program an all 2-cycle series once again. The numbers support the move, as Briggs was the lowest averaged class throughout the 2017 season. If this season’s effort and other attempts by major programs along the eastern half of the US have made any statement, it’s that Briggs 206 racers do not want to travel. We see Briggs working well in other regions of the country, including the Pacific Northwest, Northern California, and throughout the Midwest. The fact that the WKA Man Cup schedule ranges from Dousman, Wisconsin to Daytona Beach, Florida provides a challenge, and now with the series expanding to six events in 2018, there was no expectations that numbers would improve for the Briggs class in 2018.

With the addition of the KA100 to the WKA Manufacturers Cup Series, what does that mean for the Yamaha categories? The Yamaha Junior class was one of the most competitive classes in 2017 and welcomed the highest average number of racers on the season at 23. Yamaha Senior averaged 15, and adding in the new KA100 category, there will now be three Senior classes in 2018. I think this opens the door for Yamaha racers who don’t quite have the speed or budget for IAME to race a second class with the KA100. Those IAME drivers who don’t find the Yamaha attractive now have the KA100 class to double dip. We saw the USPKS program be the first major program to offer KA100, and the engine package has seemed to catch a buzz around the country as an affordable and low maintenance option. Time will tell if the 2018 formula will work and if the numbers can grow for WKA.

On the flipside, the Yamaha Sportsman numbers continue to fall, with the majority of the new Cadet racers gravitating to the ‘TaG’ packages, IAME to be more specific for the WKA program. In year’s past, the Yamaha Cadet program featured 30+ racers as it was THE class drivers 8-12 years old could run. Today, the industry has steered new and graduating Kid Kart racers to the faster Swift packages. To me, there is a big gap from the Kid Kart package to a zooming Swift machine, and the Yamaha was the perfect bridge. I think next year will be a ‘review’ season for the Yamaha package in WKA competition.

The book has now closed on the 2017 season, and the champions will be confirmed soon along with being honored at the year-end banquet. Competitors now turn their attention to the famous Daytona KartWeek in December. While still in the 2017 calendar year, it is the jump tart people use to get their 2018 season and championship hunts underway. The annual trek to the Daytona International Speedway between Christmas and New Year’s Day brings a sense of excitement you can only feel and experience by setting up camp inside turns 3 and 4 of the NASCAR oval. Taking in the sights and sounds of the road racing karts zooming past on the high banks and seeing the could of dust hovering over the dirt track outside turns 1 and 2 has become tradition. Move-in is just over 60 days away.