DKM Champions Declared at the Finale in Italy 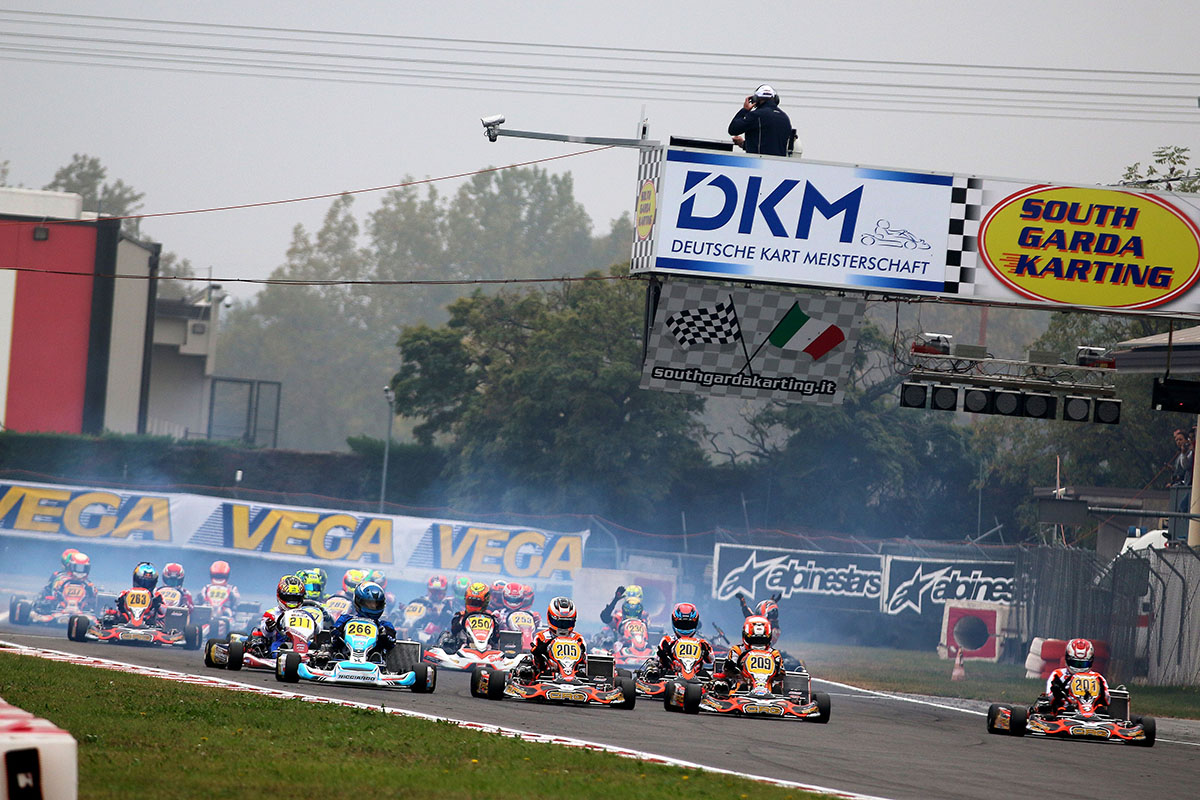 Last weekend the finale of the German Kart Championship and its four grade series took place on the South Garda Circuit in Italy. The highest German kart racing series started in Italy for the first time ever and experienced exciting races. The weather was special as well: Heavy rain made for difficult conditions on Sunday.

It was already obvious before the finale in Lonato that the races on the high-speed track were going to be especially exciting. The fight for the championship titles was still open in all four categories DKM, DJKM, DSKM and DSKC. With more than 170 participants, the fields were strongly manned at the premiere in Italy – top drivers from more than 20 nations started there.

In addition to high-class fields of participants the weather was also a further challenge. The sky above the 1.200m long track was already overcast during the free trainings on Friday as well as qualifying and the heats on Saturday – it rained the entire Sunday then. With seven different race winners, the individual categories were very balanced. In the fights for the titles, Dennis Hauger (DKM), Kas Haverkort (DJKM), Jorrit Pex (DSKM) and David Detmers (DSKC) prevailed in the end.

The events from Lonato are going to be summed up on November 5th on the German automobile-, engine- and motorsports-channel MOTORVISION.TV. At 1.10pm the best scenes and interviews can be seen in the DKM-magazine again.

Dennis Hauger (CRG Holland) and David Schumacher (KSM Schumacher Racing Team) started at the finale as the title favorites and made the fight for the championship extra thrilling. Schumacher achieved the best start on Saturday. He won a heat and started as the pole-setter into the first final race on Sunday. Next to him was his direct pursuer Hauger. The reigning junior-champion started into the race fiercely and temporarily took the lead. Schumacher’s team mates Nicklas Nielsen and Paavo Tonteri raced past him from behind though. The two then set the pace at the front. Hauger couldn’t be shaken off though and once again overtook Tonteri on second place. Nielsen crossed the finish line as the winner though and thereby achieved a successful re-entry into kart racing. The joy about his success didn’t last long though. Race control disqualified the Dane. Hauger was the new winner in front of Schumacher and Tonteri. The WARD-Racing-duo Pavel Bulantsev and Ilya Morozov completed the cup ranks.

After Hauger’s victory the Norwegian already was the new champion even before the second ranked race. He still gave it his all one more time, but Schumacher was unstoppable this time. He drove away from the rest of the field due to numerous best times and achieved a clear victory. His success didn’t count in the end though. Due to a loose rear protection the Erftland resident should have driven into the pit, didn’t do this though and got disqualified. Last year’s champion Tonteri inherited the victory in front of Bulantsev, Morozov, Lorenzo Ferrari (Fusion Motorsport) and Hauger. The 14-year-old Scandinavian was overjoyed at the finish line: “These have been two great years at the DKM. After winning the junior class last year it’s a great feeling to win the DKM now. Today’s races were exciting but I tried to stay calm.”

The field of the German Junior Kart Championship was strongly manned at the final weekend, counting 51 youngsters. Kas Haverkort (CRG Keijzer Racing) from the Netherlands achieved the best start into the fight for the championship titles. Pole position after qualifying gave him a good starting position. During the course of the heats he fell back to third place though. Hadrien David (Chiesa Corse), also a title favorite, then led the rankings and used his good starting position at the first final race. From the first starting row he drove away from his pursuers and celebrated his second victory of the season. There were strong fights for positions behind second driver Luca Bosco (Baby Race Academy). Several drivers fought for the remaining place among the top three. Leandro Anderrüti (Auf der Maur GmbH) finally came in on the third place. Malthe Jakobsen (TK Racing) came in fourth in front of Haverkort on fifth place. Thereby the CRG Keijzer Racing Team driver collected enough points to celebrate being the new champion. Best German was Hugo Sasse (CRG TB Racing Team) on ninth place.

Anderrüti provided a surprise at the second race. After David fell back to the end of the field due to a turn during the first lap, Anderrüti took the lead and held it until the end of the race. The Swiss’ joy about his first DJKM victory was overwhelming then: “I achieved a great start and then really gave everything. The weather was on my side today and helped me achieve the victory.” Second winner and new champion Haverkort was in a great mood as well: “This was a great year for me and I’m proud to have won. I’d like to thank everyone who has supported me.” Third driver Malthe Jakobsen (TK Racing) ended up in the cup ranks again in front of Roman Stanek (Kamito) and Luigi Coluccio (BirelART Racing). Best German was Hugo Sasse (CRG TB Racing Team) again on seventh place. He also won the vice championship.

Jorrit Pex (CRG Holland) was unbeatable at the German Shifterkart Championship in 2017 again. The five-time champion travelled to the finale in Italy as the leading driver and didn’t risk too much then. He collected enough points in both races and made history again. By winning his sixth championship he broke his own record. “This was a good season for us, without technical difficulties or fallings out. I’m honored to have won the championship six times now”, he beamed on the winners’ podium.

The new champion didn’t play a role in the fights for the victories this time. Fabian Federer (SRP Racing Team) used his knowledge of the track in Lonato during qualifying and drove the best time. A falling out at the first heat threw the driver from South Tyrol back though. Jeremy Iglesias (FormulaK Racing Team) took the lead of the interim rankings and achieved a strong initial phase at the first final race. In the middle of the race he seemed to be on a safe track towards his third victory of the season. But William Lanzeni seemed to ignite his turbo from behind. The Italian was considerably faster than the leading driver and closed the gap to Iglesias. He didn’t let anyone take his lead though and won after 21 laps. “This was an exciting race towards the end. Even though I’ve already driven lots of laps here in Lonato, this was my first race in rain. Our air pressure wasn’t right anymore during the second half of the race and things got close one more time”, Iglesias summed up at the finish line. Jorrit Pex followed behind the winning duo in front of Matteo Zanchi (Zanchi Motorsport) and Marijn Kremers (KSW BirelART Austria Racing Team). Alexander Schmitz came in on the great sixth place and was the best German driver.

Matteo Zanchi showed an impressive performance at the second final race. From the first lap on, he didn’t give his opponents any chance of attacking and achieved a clear victory. Second winner Lanzeni caused an Italian double success in front of kick-off winner Iglesias. The Frenchman experienced exciting first laps. Alexander Schmitz attacked several times but couldn’t get past. He ended up among the top five on fourth place and finished the season with his best performance so far. Jorrit Pex came in fifth, but a time penalty threw him back two places. Dylan Davies (CRG Keijzer Racing) was the new fifth winner.

On the dry track, guest driver Stefano De Vecchi (Renda Motorsport) was unstoppable on Saturday. The Italian was the fastest driver of the field at qualifying and both heats. But the FormulaK-driver didn’t play any role during the final races. In the rain, Jeroen Bos (CRG Holland) took the lead. The Dutchman drove his last kart race in Lonato and experienced a perfect end to his 20-year-long career. He achieved an advance of more than 16 seconds at both races and summed things up completely positively: “My farewell to kart racing couldn’t have been any better. I’ve now driven karts for 20 years and had a great time. The double victory and my third place in the championship make me really happy.”

The second place was indisputable at both races as well. David Detmers (MSR Motorsport/WST Power) stayed in the role of the pursuer and secured the championship title. “Jeroen was really fast today, but I knew that second place would be enough and therefore didn’t risk too much during the races”, the Austrian summed up. The achievement of the further places was a lot more exciting. At the first final race, guest driver Emilien Denner (CRG Holland) came in third in front of Kay van Berlo (CRG Keijzer Racing) and best German driver Moritz Horn (CRG TB Racing Team). Nicolas Schöll (KSB Racing Team) showed a great catching-up race at the second race then. From twelfth starting position he drove forward to third place. Denner came in fourth in front of best German driver Marcel Schultheiß (Mach1 Motorsport). The latter received a time penalty after the race though and lost his place – new fifth winner was Moritz Horn.

A successful season of the German Kart Championship has now ended with the finale in Lonato. The organizational team is now already looking forward to the year 2018. The DKM is then going to start into the new season in Lonato. Races in Wackersdorf, Ampfing, Kerpen and Belgian Genk are going to follow. Series coordinator Stefan Wagner summed things up positively in the end: “I’m very content with this year’s season. We experienced five exciting racing weekends with high-class fields of participants. I’d like to thank my entire team for their tireless work and the further development of the DKM. I’d also like to thank all drivers and teams for the great cooperation, also in the name of the DMSB. We’re looking forward to 2018.”