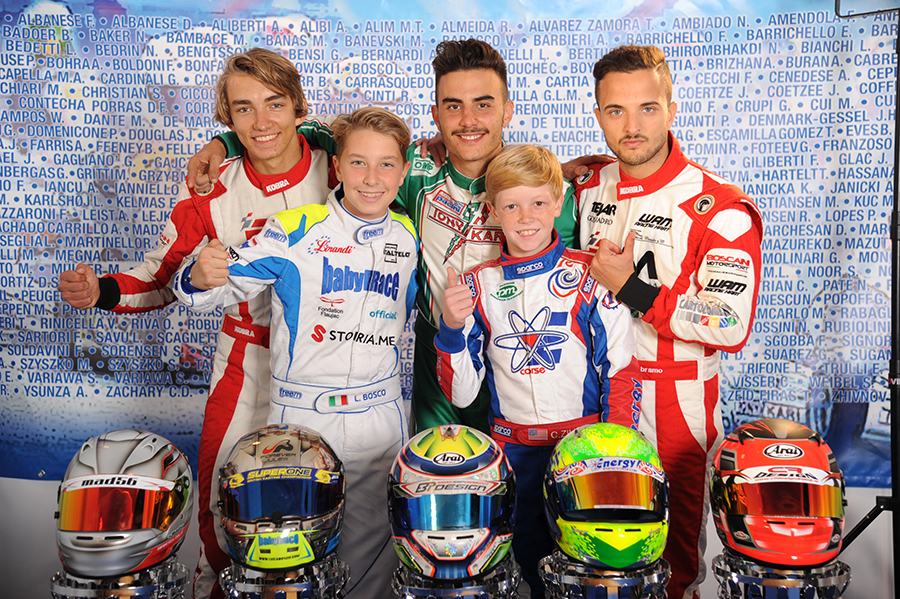 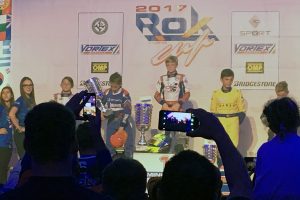 Zilisch and Luca Mars on the Mini podium (Photo: Challenge of the Americas)

This past weekend was the 15th edition of the Rok Cup International Final, held at the South Garda Karting facility in Lonato, Italy. A total of 415 ‘Rokkers’ from 49 countries and five continents took to the track in the five divisions offered, including 162 in the Mini Rok class. That is where the United States of America shined, grabbing two positions on the podium including the top spot with WKA Bridgestone Mid-Season Shootout winner Connor Zilisch. It was the second time an American won the title, with Logan Sargeant earning the title in 2011.

Fellow Energy driver Luca Mars joined him on the podium, placing fourth after coming up 10 positions in the 12-lap battle. A total of four USA drivers made the main event, with Nikita Johnson (Parolin) placing 11th and Akshay Bohra (CRG) ending up 22nd. Braden Eves (Vemme) carried the Red, White, and Blue in Senior Rok, placing eighth in his first trip to the Rok Cup International Final. In the Shifter Rok division, Florida driver Mathias Ramirez (Birel ART) came away with a 13th-place finish. Tyler Gonzalez and Jace Denmark Gessel were the two drivers in Junior Rok that made the main event. Unfortunately, there race ended before the first lap was completed with an incident.

PATH OF THE 5 CHAMPIONS

The event starts under the sign of the Polish drivers, Maciej Szyszko, Szczurek, Mila and Szymon Szyszko, are able to win all together, not less than eight out of the ten qualifying heats. The only ones that from the beginning prove to be able to be good rivals for the formidable Polish drivers are the two Italians Cicognini and Carenini, and the Swiss Muller. The final starts with the expected escape of Maciej Szyszko, who runs seemingly to an easy success. Behind the bend there is Cicognini, who, after losing ground in the early stages, starts a terrific final comeback, leading him to reach the leader. In three rounds (from 15th to 18th lap), Cicognini reopens a race that seemed closed, takes Szyszko and passes him excellently, with a magical overtaking. The Polish does not give up and reacts with his distinguishable determination, regaining the head of the race on nineteenth lap. Cicognini and Szyszko fight face to face and at the beginning of the last lap the Italian signs another impeccable overtaking, while behind them Muller gradually closes the gap that divided them two. The last three bends are dramatic (sportily speaking), with Cicognini aiming to success and the pursuers, Szyszko and Muller, preparing the final assault. Unfortunately, the last bend is a real destruction. Muller attacks the two before him and hits Szyszko, which in turn cannot avoid to plunge on Cicognini. The result of the Swiss play puts out Cicognini and takes Szyszko out of the podium, giving Bartosz Mila the title of Senior International Rok Champion. Under the checkered flag, Muller passes second but is then sanctioned by the race direction, with ten seconds of penalty and on the podium, next to the new champion Mila, get on two performing Rokkers, Szczurek and Carenini. Just off the podium are the excellent Cristian Comanducci, Di Cori, Szymon Szyszko and the author of an excellent comeback Sabella.

SUPER ROK: THE HOUR OF ABRAMO

Mattia D’Abramo leaves some initial glimpses at Gaglianò, the pole-maker and winner of the first heat. It is from the second heat on that D’Abramo no longer leaves the number one position and in the final he proves to be perfect, leading the group of Super Rokkers from the first to the last lap. At the start, the only one showing the pace of the future champion is Russo, who is chased in the early stages, with difficulty, by Boyd, Sorensen and Mazzotti. In a few laps, the couple D’Abramo-Rosso literally takes the lead with the first one not missing a shot and Russo ready to take advantage of any distraction of his rival. Funnier is the fight for the last step of the podium, with poleman Gaglianò getting positions and having the best on Chiari, Mazzotti, Brigatti and the South African Boyd. For Gaglianò, the overtaking worthing the podium comes at four laps from the end (17th lap). In the great day of Mattia D’Abramo, also author of the best lap, we find a Super Lady in the ninth place, it’s the South African Fabienne Lanz. The Expert trophy goes to Rino Passanisi, 24th overall, ahead of the Mexican Arturo Ysunza in the special ranking.

MINI ROK: ZILISCH TAKES THE TITLE IN THE USA

Qualifying heats see Paolo Gallo put the other 161 opponents behind his shoulders. These heats are the right tool to separate the Mini Rokker platoon into two groups, so that two distinct heats series can be set up. In the 1 Series, is always Gallo at the first position, with two successes, in front of Cimens (a victory) and the Polish Pasiewicz (two victories). In the spectacular heats of Series 2, Kucharczyk is the best, in front of Bedrin and Badoer. So, from in the first row of the final there are Gallo and Kucharczyk, followed by Bedrin and Cimenes. The Mini race has a first impressive lap with two plot twists that put off as many top drivers, Gallo and Badoer. The latter, in the attempt to attack Bedrin, ends in the head-tail and Gallo, after a not so brilliant start, stops because of the chain. Bedrin, Spina, Pasiewicz and Zilisch take the lead of the race, followed by a very aggressive group, made up of Cenedese, Croccolino and Mars. The first half of the race sees a formidable solo of the Russian Bedrin, which imposes a mad pace, detaching the pursuers, headed by the American Zilisch and the Polish Pasiewicz. In the last four rounds (out of 12 scheduled), the race fight reopens thanks to Pasiewicz, who runs second and takes Bedrin, pulling on Zilisch. The exchange of positions between the three drivers is lively and fair and solves in the three-final bends of the South Garda track. The trio enters the first of the three curves with leader Bedrin and cuts the finish line with Pasiewicz first and Connor Zilisch second. Under the checkered flag, it is soon clear that Pasiewicz is aware of having the front bumper out of place, in fact the Russian does not exult, knowing that he will get 5 seconds of penalty. For the first time in the history of Rok Final, the most favourite trophy of the Mini Rok goes to the USA, North Carolina, thanks to the American Connor Zilisch. The podium, after the penalty of Pasiewicz, sees Bedrin in second place and Croccolino, the fighter, in the third one.

The event immediately begins with a great Albanese who signs the pole in front of the Swedish Milell and Italians Squaranti, Buran and Comanducci. In the heats, Albanese and Squaranti imposes two times each and place in the front row of the final grid. The other victories are of Marcon and Buran, the latter particularly unlucky at this stage, due to two withdrawals. At the start of the final race Squaranti is able to take the lead, though pressed by Albanese and the outgoing champion, Marcon. Squaranti’s expectations of winning the title soon break because of Albanese’s supremacy, who takes the head of the race and puts an unmistakable gap between himself and his rivals, winning his third international title. Squaranti, lost the head of the race, undergoes the attack of his eternal rival Marcon and must be satisfied with the third step of the podium. Zani and Cinti complete the top-5 list, finishing in front of the Expert trophy winner, Andrea Tonoli. The race of the guest star Rubens Barrichello is excellent, always fighting and in full swing, the former F1 driver was put ko by a plugging three-laps to the finish, while he was struggling for the top-10. For the new international champion Danilo Albanese, the Rok success in the category with the gearbox has a special meaning. Danilo boasts already an international Rok title (today a Senior Rok) and one in the Super class. He is the only one to have won in three different categories and in 2013, Albanese, took the second place in the Junior Rok.

JUNIOR ROK: BOSCO WINS ON EVERYBODY

During the heats, many are the drivers coming to light, winning and getting ready for the title. In the race sequence that leads to the final, the winners are: Bosco (4 victories), Sabella (3 victories), Pizzi (1 victory), Bizzozero (3 victories), the poleman Cecchi (1 victory), Fusco (1 victory) and Franzoso (2 victories). Other Rokker drivers, too, enter the top list: they are Caglioni, Famularo, Feeney and Grinbergas. With so many pretenders to the title, the leader Bosco must keep his concentration high so as not to miss the first position to Caglioni, Sabella and Feeney’s advantage. Bosco only needs a few rounds to be able to put a few meters between him and the two dangerous pursuers, Caglioni and Sabella. This advantage will prove to be fundamental to Bosco, which places a deserved international title. In the last laps of the race, with the first three established positions, Pizzi and Feeney offer good emotions, fighting for the fourth place. In a rather constant race at the summit, the fun came from the large number of overtakings performed by the Brazilian Morgatto (author of the best lap) and the Monegasque driver, Bianchi. Amongst the many Rokkers, there is a very fast Lady, Miriana Ancilla Capella, able of entering the final and winning the lady’s standings.