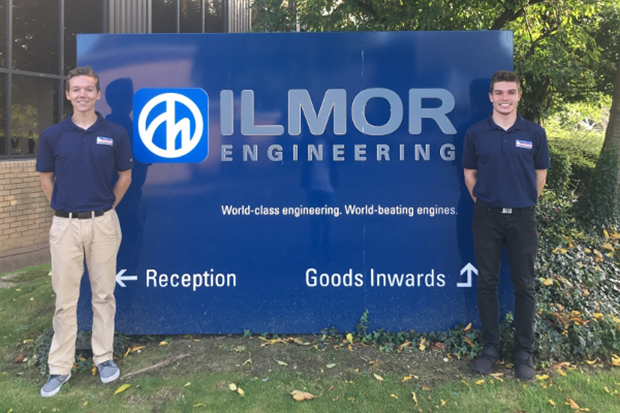 Jonathan Kotyk has written another blog to recount his first hectic week in the UK and look forward to what promises to be an exciting next few days at the Formula Formula Ford Festival: (http://teamusascholarship.org/?p=4164)

After a successful test at Donington Park last Thursday, Aaron and I helped the Cliff Dempsey team pack up the truck. We then headed over to Oulton Park with the team’s mechanic Jake – or as everyone calls him, “Cookie.” It was a short hour-and-a-half drive, making for a nice ride through some small villages. We parked the truck and collected Cliff and Harrison before heading over to the hotel for a good night’s rest. The next morning quickly arrived and it was time for us to start our two-day outing at Oulton Park. The weekend consisted of four practice runs on Friday followed by a qualifying and two races Saturday.

As we unloaded the truck, a light rain began to fall making for a cold and rainy Friday morning. This was good news for both Aaron and I because it meant we would be able to get some wet practice. Just before our first run, long-time Oulton Park racer and team mechanic Dave Hart took Aaron and me in his car for some sighting laps. Dave helped point out some references which we could use to figure out the racing line and our braking markers. Then it was time for us to hit the track.

Oulton Park is an impressive circuit comprising a mix of high-speed and low-speed corners giving us the opportunity to push the cars to their limits. Our first practice went well. It was my first real drive in the full wet on the Avon tire – and Aaron’s as well. This gave us the chance to learn the track as well as the tire. After our run we returned to the hauler and reviewed video and data on the computer comparing it to previous drivers Cliff had run at the circuit. The information help both of us see where we needed to improve for the second run. The track was still wet but the weather began to change as the winds picked up and the sun began to peek between the clouds. We continued to find speed throughout the day, and the track was fully dry for the final session which allowed us to push the cars and tires to the limit.

On our way back to the hotel Cliff suggested we stop by an Italian restaurant called Pesto. It’s similar to a restaurant that serves Spanish tapas but the inspiration was Italian. This allows you to choose multiple dishes like pizza, pasta, salads and other tasty meals. The concept was great because you could have a variety of small dishes, giving you a good mix for your main course. I highly recommend stopping by if you are ever in the Oulton Park area.

With a good night’s rest, we were ready to tackle Saturday’s races. Our goal was to continue to gain experience and not interfere in the series championship. This meant we would run qualifying but when it came race time we would start from the pit lane. Aaron was able to qualify eighth and I lined up third in a field of 24 Formula Fords. This was a great effort for us because there were some top drivers in the field. When it came time for the races we dropped back to create a gap to give us some racing room, which allowed us to get some clear laps without interfering with the other drivers’ results. With our testing complete, we ended the weekend at Oulton Park on a high note.

After a nice Sunday spent relaxing at Cliff and Michelle’s house, we were ready to head over to Ilmor Engineering’s UK facility in Brixworth on Monday. Chief Engineer Steve O’Connor and Design Engineer Simon Young were great hosts. It was very interesting to see how much Ilmor plays a part in the development of motorsports, and having been fortunate enough also to tour their U.S. location when we were in Detroit for the Team USA Scholarship shootout, we were able to see how both facilities work together to produce a wide variety of different components and complete engines

Our next stop is Brands Hatch for the Formula Ford Festival. We head out Tuesday morning. Our plan is to continue to build on our progress thus far and prepare ourselves as best we can for the weekend’s races. Brands is shaping up to be an awesome event with three days of practice, qualifying heats, and a main event Sunday.

Aaron and I would like to say a big thank-you to everyone for making this experience possible. Also, thanks for reading, and stay tuned for our next vlog.