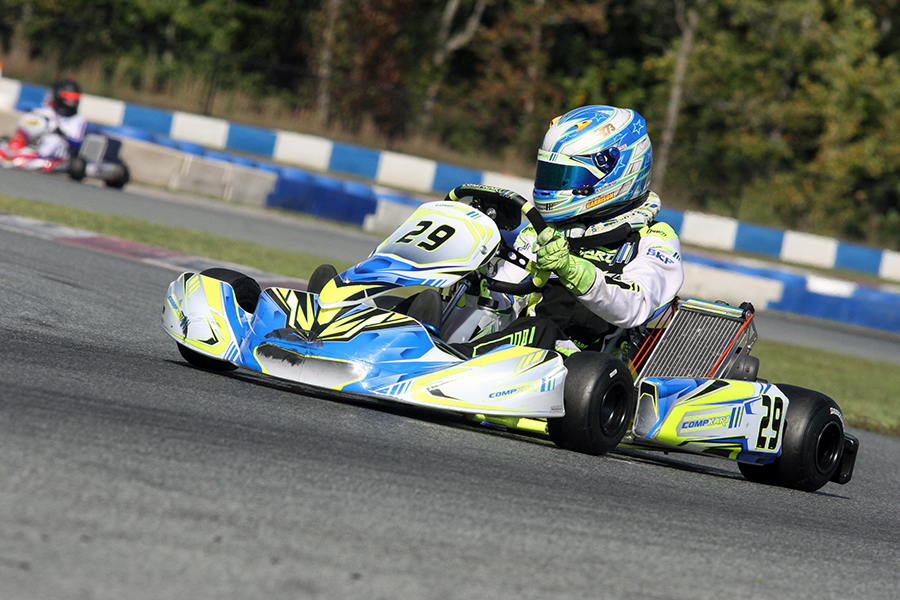 The 2017 WKA Manufacturers Cup Series closed out with Championship Sunday at the GoPro Motorplex in Mooresville, North Carolina for the Top Kart USA Grand Nationals. Eight WKA Eagle trophies for the winners were awarded on Saturday, with another group of eight for those who would end Sunday on top of the podium. The day was also the final round of the 10-race point chase with Championship Sunday deciding those drivers who would be crowned champion for the 2017 season. A handful of those who secured enough points on the year to claim a title finished off the year with a victory.

One of the those drivers was Dakota Pesek in the Yamaha Senior division. Pesek has been racing the second half of the season with his biggest fan not alongside him – his dad Kevin Pesek. A win in Pittsburgh helped honor his father – who passed away on May 7. That win by the Top Kart driver triggered a three race win streak. Top Kart teammate Alexander Kardashian had the pace early on, taking the top spot in qualifying and driving away to a big win in the Prefinal. Pesek found the speed for the main event, and the two battled throughout the 20-lap Final, with Pesek reaching the checkered flag first. It was his sixth victory on the season, capping off a solid 2017 championship. Nate Dean (Top Kart) had a drive of his own, climbing forward to steal third from Chuck Tate (Parolin) on the final lap. Dean was shuffled back to eighth out of the opening corner and had to run down the field throughout the race. It was the first podium for Dean and well deserved. Completing the top-five was Peter Michel. 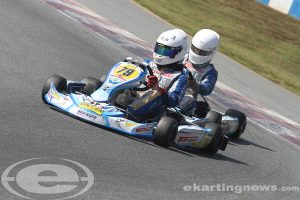 As we saw yesterday in the Pro IAME Senior class, a clear track is a fast track. Brandon Lemke (Top Kart) drove away to victory on Saturday after getting away early from the field. Lemke qualified on the pole position Sunday morning, but finished third to Dusty Davis (FA Kart) and California driver Nicky Hays (Vemme) in the Prefinal. Lemke led the first lap and the second was busy with action. Austin Garrison (CompKart) went from fifth to first with some contact taking Davis out, and shuffling up the order. Garrison kept laying down fast and consistent laps as a five-kart group battled for the second spot. Garrison pulled away to a five-second advantage for his first WKA victory of the season. The fight for second went down to the wire, with an exciting last lap. Coming to the line, the drivers went three-wide with local driver Blake Hunt (FA Kart) edging out Canadian Ryan MacDermid (Kosmic) and Hays for the spot. Hays however lost his transponder with two laps remaining and after a protest, was not awarded his finishing position on the track. That put Ashley Rogero (FA Kart) into fourth with Lemke finishing fifth. The result for Lemke helped to secure the championship, his first Senior title in WKA competition. 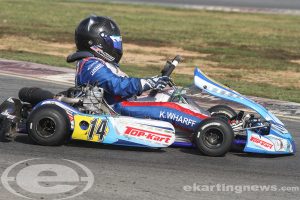 Canadian Dale Curran (Kosmic) was looking to pull off the upset in the Pro IAME Junior category, setting fast time in qualifying and holding back the field in the Prefinal. Saturday winner Gray Leadbetter (Tony Kart) was in the hunt, coming up just short in the Prefinal. On lap three of the Final, Curran was shuffled back to seventh as Leadbetter led a group of eight drivers. Kaden Wharff (Top Kart) was back in 11th after the second lap, but kept digging until reach the lead group as they continued to shuffle for the lead. Wharff put himself into the third spot behind Leadbetter and Caleb Bacon (Tony Kart) with three laps remaining. On the final circuit, Leadbetter took the top spot from Bacon, while Wharff followed through and moved to the lead into turn four. Wharff ran the defensive line into the turn eight hairpin, and held a tight line on the exit. Bacon tried the criss-cross but jammed up behind Wharff on the exit, bunching up the field. Wharff was able to maintain the lead to the checkered flag, leading the one and only important lap, the last to score his first Junior victory. Leadbetter won the race to the line for second with now two-time champion Pauly Massimino (Top Kart) rounding out the podium. Tyler Ferris (Top Kart) was fourth with Cade Downes (CompKart) in fifth after leading laps early on in the race. 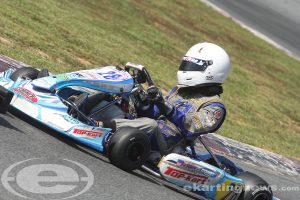 Tyler Ferris came out of the wild Yamaha Junior main event with the victory (Photo: EKN)

Wharff was in the hunt for the victory in the Yamaha Junior division earlier on the day. Elliott Budzinski (Tony Kart) came away with fast time in qualifying while Wharff (Top Kart) took the win in the Prefinal just ahead of fellow Junior rookie Donald Whorton III (FA Kart). The race was once again very competitive throughout the 20-lap Final. Wharff led for much of the second half of the race as the rest of the group jostled for position behind him. Dorsey assumed the second spot, and planted himself right on the rear bumper of Wharff. Dorsey made his move on the final lap into turn four despite Wharff’s defensive line. Dorsey put in his own defense into turn eight. It failed and Tyler Ferris (Top Kart), who followed Dorsey past Wharff, moved into the lead. Coming from seventh after the opening lap, Ferris held on to score the victory, leading only the last lap of the race. The win was his first on the season in the class, helping clinch the class championship. Whorton ended up second for his best finish of 2017 with Wharff holding on to finish third. Ian Quinn (Tony Kart) drove to an impressive fourth while Dorsey slipped back to fifth. 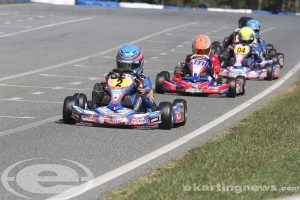 For the third time in 2017, the Adams brothers finished 1-2 in the Yamaha Sportsman division. Saturday, Garrett Adams (Benik) won the Final for his second victory of the season while Logan Adams (Benik) finished second. Adams, after winning the Prefinal, jumped out to the lead in the 20-lap Final. Top qualifier Annie Rhule (Energy) ran second early on until Garrett moved into the spot. They would run nose-to-tail for the remainder of the race with Logan scoring his second victory of the season. Garrett placed second, earning the series championship. Rhule settled for third with Sam Hinds (FA Kart) running fourth ahead of Danny Dyszelski (Energy).

The Pro Swift Sportsman race was another great battle on the day. Saturday winner Annie Rhule (Energy) and Thomas Schrage (PCR) were able to break away briefly before Nitro Kart drivers Frankie Iadevaia and Ashton Chilton reeled them back in with four laps to go. Schrage pulled the trigger on lap 18, taking the lead before Rhule and Chilton slipped past on the next circuit. Rhule was fighting off Chilton on the final lap with the two going wide on the exit of turn eight. Schrage went from third to first, with Iadevaia following through. The two drag-raced to the line with Schrage reaching it first by 22 thousandths ahead of Iadevaia for his first WKA victory. For Iadevaia, it was a solid Pro Swift debut with a two podium finishes on the weekend. Chilton finished third, earning fast lap of the race en route to locking up the championship. Rhule placed fourth while Spencer Lofton won the battle for fifth. 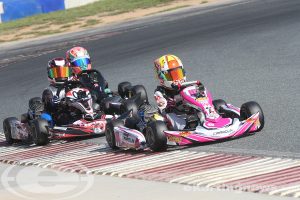 Caleb Gafrarar (Parolin) was the second driver on the weekend to take both victories in his respective category. Gafrarar came away with the Prefinal win and was joined at the front with Sebastian Ng (Nitro Kart) and Sofia D’Arrigo (Nitro Kart). The trio began mixing it up after lap 11 with Gafrarar and D’Arrigo going back and forth. D’Arrigo was able grab the lead at the white flag, and ran a defensive line down to turn one. Gafrarar went to the outside, and made it stick through the first turn. He got away through the following corners and reached the checkered flag for the victory. Ng slipped past D’Arrigo for third. Ben Maier put three Nitro Karts inside the top-five, posting fast lap of the race en route to a fourth place finish while top qualifier Danny Dyszelski (Energy) ended up fifth.

Corey Towles jumped back to the top step of the podium in the Briggs 206 Senior class. Towles (Eagle) jumped out to the lead in the Final ahead of top qualifier and Prefinal winner Zach Linsell (MGM), David Kalb Jr. (Eagle) and Jeremy Warren (Track Kart). The four mixed it up early until Towles and Kalb pulled away at the halfway point. Towles led the remainder of the way with Kalb unable to work past for the lead. The victory gave Towles his third win in four starts. Kalb finished second, which put him short in the championship chase to Eric Fagan (Track Kart), who ended the day in sixth. Linsell completed the podium with Warren in fourth and Matthew Turner (Arrow) in fifth.