Lemke dominates with Pesek moving one step close to title 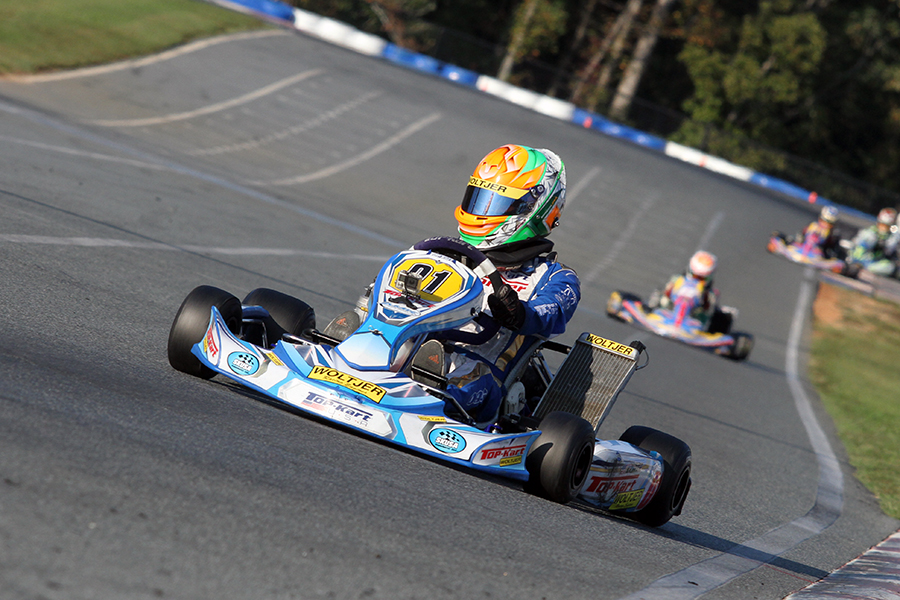 Brandon Lemke drove away to the victory in Pro IAME Senior (Photo: EKN)

The 2017 WKA Manufacturers Cup Series Top Kart USA Grand Nationals completed the opening day at the GoPro Motorplex in Mooresville, North Carolina on Saturday. Clouds surrounded the area until they broke up, bringing in warmer temperatures and bright sunshine as the nine categories completed the day. The championship chases were further defined with the ninth round of the 2017 season as driver put themselves into better positions for the titles and others just added to their resumes with victories on the day.

The Pro IAME Senior division was dominated in the main event by championship contender Brandon Lemke (Top Kart). The former Triple-Crown champ drove away from the field in the main event, going wire to wire for the victory. It was the second victory for Lemke on the year, helping to put him at the top of the point standings heading into championship Sunday. Ashley Rogero (FA Kart) took the win in both heat races, but finished third behind Canadian Ryan MacDermid (Kosmic). Californian Nicky Hays (Vemme) drove to fourth over Michael Bovim (CompKart). 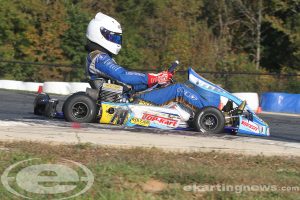 Two drivers battled throughout the day in the Yamaha Senior division. Alexander Kardashian (Top Kart) and Dakota Pesek (Top Kart) each won a heat race after Kardashian secured fast time in qualifying. The two each lead in the main event leading up to the final lap. Kardashian made a move for the win in the final corner, drifting wide to allow Pesek the room to steal the top spot for the race win, his third on the year. Zach Linsell (MGM) drove to the third step on the podium ahead of Chuck Tate (Parolin) and Nate Dean (Top Kart).

Coming into the weekend, Pauly Massimino looked to wrap up his second straight Pro IAME Junior title. The Top Kart driver secured the pole position in qualifying, however, Canadian Dale Curran stole the show in the two heat races. Massimino ended up starting the main event in 10th after a poor result in Heat 2. Curran and Gray Leadbetter (Tony Kart) were able to pull away from the field, until reeled in late by a group of three, including Massimino. He took the lead briefly before Leadbetter retook the spot. She would hold on to the checkered flag, earning her first WKA victory. Massimino finished second, helping to secure the championship. Cade Downes (CompKart) rounded out the podium with Curran in fourth and Hayden Jones (Top Kart) in fifth. 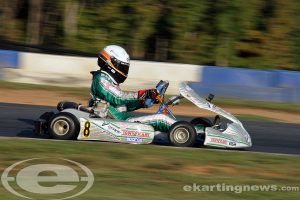 Yamaha Junior has been the most exciting category of the season, and Saturday added even more drama. Championship contenders Colin Neal (Vemme) and Elliott Budzinski (Tony Kart) were at the front with Neal earning the fast time in qualifying while Budzinski won both heat races. Each led early on in the main event until championship leader Tyler Ferris (Top Kart) worked his way from ninth on the grid to the front with Jason Welage (Top Kart) on his tail. The question was, is Welage there to be wingman for Ferris, or rival. On the last lap, it appeared Welage was out for the victory, making the move at turn eight. Ferris came right back at turn nine with Badger winner Jack Dorsey following through. Ferris went wide at the final corner allowing Dorsey to drag race him to the line. By 25 thousandths, Dorsey scored his second straight victory. Emory Lyda (Merlin) completed the podium with Arie Venberg (Merlin) up from 13th to fourth as Welage slipped to fifth.

Pro Swift Sportsman welcomed one of the toughest fields all season with the number of talented local drivers mixed in with series regulars. Annie Rhule (Energy) was able to secure the win in both heat races, and from there led wire-to-wire for her first ever WKA victory. Ashton Chilton (Nitro Kart) applied pressure late, coming up just 83 thousandths short at the line. Frankie Iadevaia (Nitro Kart) ran third in his first Pro Swift start. Tyler Wettengel (Benik) was fourth and Isaac Beekman (CompKart) fifth. 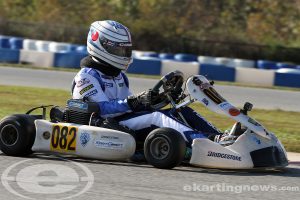 Jack Dorsey went from fourth to first on the final lap for the victory in Yamaha Junior (Photo: EKN)

Rhule nearly grabbed her first win in the Yamaha Sportsman division. The Adams brothers – Logan and Garrett – were up front with Rhule (Energy). The three pulled away from the field with Garrett (Benik) working his way to the point. Logan (Benik) ran wingman with Rhule in third. That is how they would cross the line with Garrett securing the victory. Danny Dyszelski (Energy) ran fourth with Thomas Schrage (PCR) completing the top-five.

The Mini Swift class was decide off the track. Sofia D’Arrigo (Nitro Kart) dominated the day, sweeping the action en route to what appeared to be her first WKA victory. Tech inspection ruled her engine to be non-compliant, thus removing her from the results. That promoted Caleb Gafrarar (Parolin) to the top step of the podium, earning his fourth victory of the season. Sebastian Ng (Nitro Kart) finished second with Ben Maier (Nitro Kart) rounding out the podium. Hoyt Mohr recorded fast time with Danny Dyszelski (Energy) making up the top-five. 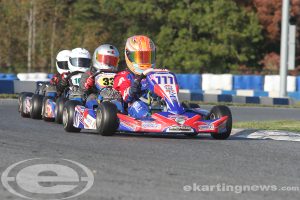 Briggs 206 Senior came down to the final corner between the two heat race winners – Zach Linsell (MGM) and Corey Towles (Eagle). The two swapped the lead four times on the final lap, including the final corner with Towles sliding wide on the exit after running a defensive line. This gave Linsell a better run to the checkered flag, reaching it first by 42 thousandths of a second. Eric Fagan (Track Kart) won the fight for third over David Kalb Jr. (Eagle) with Matthew Turner (Arrow) in fifth.

KA100 was added for a Saturday only event with the category coming on as a series division for 2018. Dusty Davis (Top Kart) pulled off a last lap pass to secure the victory. Luke Wallace slipped into second with Roman Hanes (Top Kart) in third. Blake Hunt (Arrow) was fourth with Daniel Tate (Praga) in fifth.