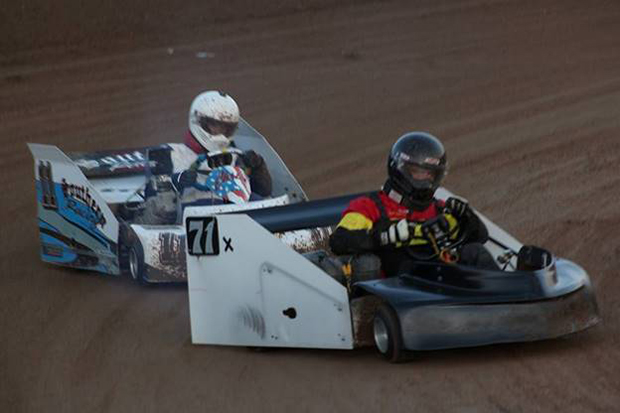 The So Cal Oval Karters will make their final 2017 trek up the hill to race at John Aden’s Wheel2Wheel Raceway on the San Bernardino County Fairgrounds in Victorville this Saturday night, October 14th.  The CLS will be joined by the W2W Speedway Sprints and Dirt Karts.  The spectator gates will open at 5:00 P.M. with racing at 6:00.

Thus far in 2017, the KT100’s at W2W have been dominated by the Southern family of Hesperia.  Chris Southern took the season opener in March and his son Thomas has taken home the winner’s hardware in the last three.  The only other driver to win a KT100 main event in the SCOK this season was Lakewood’s Chris Gibb on June 10th on the road course at Perris Auto Speedway.

In the Open Class at W2W, Chris Southern has been the karter to beat having won three of the first four races.  Last time out on September 9th, the honors at the checkered went to Cathedral City racer Dillon Hoffman.  It was Hoffman’s second victory of the season.  His other triumph came on the infield oval at Perris Auto Speedway on April 15th.

Three different drivers have enjoyed the victory spoils in the F200’s at W2W in 2017.  Defending class champ Steve Juillerat of Whittier has bested the field two times while Norm Reynolds of San Marcos and Scott Gaynor each have tasted victory once at the High Desert Oval.  Gaynor comes in with a two-race winning streak in the class having notched the wins on August 6th in the Grand Arena at Industry Hills and last month at Wheel2Wheel.

In the Senior 4 Cycles, Ronnie Benton of San Diego has won three of the first four main events of the year at W2W.  However, last month the W2W win went to visiting karter Buddy Shelton.  Not only has Benton dominated at W2W, he has dominated the season winning all but two of the first seven main events.

In the Juniors, Brandon Head will be looking to win his fourth straight main event win dating back to June 10th.

The tightest SCOK points race heading into the last two races of 2017 is in the Open Class where Chris Southern is a mere 15-points ahead of Hoffman.  In the KT100’s Thomas Southern has an 88-point advantage over his father.  Reynolds leads Gaynor by 165-points in the F200’s while Benton has a whopping 230-point advantage over Chino’s Tony de Almeida in the Senior 4 Cycles.

After Saturday in Victorville, there will only be one race left on the 2017 SCOK schedule.  That will be on the road course at Perris Auto Speedway on November 4th.

To keep up with the So Cal Oval Karters on Facebook, please use the following link:  https://www.facebook.com/search/str/so+cal+oval+karters/keywords_search