Dante, Griggio and Yannick Federer Winners of the Autumn Trophy in Lonato with Maranello Kart 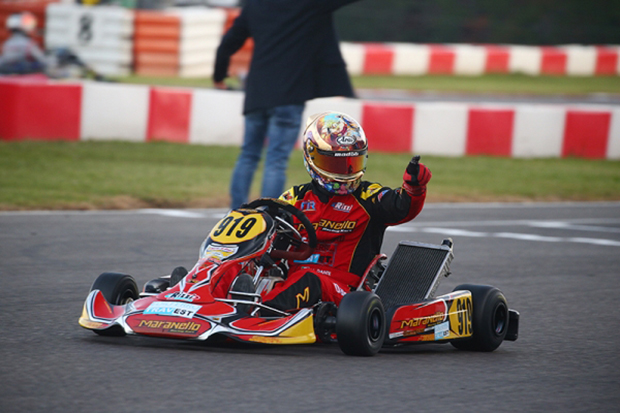 Massimo Dante won the KZ2 Autumn Trophy in Lonato, Cristian Griggio the KZ3’s Over, Yannick Federer that of 60 Mini. Maranello Kart back on track this weekend for the Rok Cup International with Dante and Tonoli.

Maranello Kart and Massimo Dante reached the goal set ahead of them taking the victory in the 27th Autumn Trophy of class KZ2 in Lonato, thanks also to an excellent race in the second round after winning the first race on October 1st.

Massimo Dante scored a prestigious result on Maranello-Tm, taking a good second place in the closer that allowed him to top the general classification of the KZ2 Trophy.

In the KZ2 Final, among the other protagonists on Maranello, Andrea Ceresoli was seventh, Christoph Hold was 12th after the fourth place in Prefinal,  Sara Marcucic was 14th and Marco Pastacaldi 17th, after coming seventh in Prefinal. Ceresoli closed fourth in the classification of the Trophy, while Hold seventh.

Maranello Kart not only secured the KZ2 Trophy, but good satisfaction came also from KZ3 Over with Cristian Griggio and 60 Mini with Yannick Federer. Both drivers won in fact the closing round and topped the classification of the Autumn Trophy. In KZ3 Over, Griggio scored a double win in the two races on Maranello-Tm, while the very young Federer, also on Maranello-Tm run by SRP Racing Team, won the Title thanks to the great victory in the closing round after the third place taken in the first race.

Maranello Kart locked out the KZ3 Over podium in the closing round. Griggio was in fact first, while Gianni Corti and Diego De Palma followed him respectively in second and third. De Palma ended second in the classification of the Trophy, being 8 points shy of Griggio. The other protagonists of the KZ3 Over on Maranello were Jarno Giusti, who was seventh in the closing round, and Fabio Danti who was eighth.

Maurizio Giberti was second in the Final of KZ4, a result that earned him the second place in the standings of the Trophy.

Bad luck hit KZ3 Junior instead, as an incident in the Final compromised Marco Miastkowski’s chances for a good result. He therefore ended fifth in the Trophy.

Mattia Giannini also had to retire from the race. In KZ3 Under, Riccardo Savoia was seventh, while Michael Dalle Stelle did not finish either. Savoia ended fourth in the final classification of the Trophy, while Dalle Stelle tenth.

In OK-Junior,  Leandro Anderrutti was second in the Trophy thanks to the victory claimed in the opener, despite the retirement in the closing round.

A good performance in Rok Shifter was put in by Andrea Tonoli, who was fourth in the Final, while the Polish driver Wojciech Grzyb was 10th.

The next appointment on track for Maranello Kart will be the  Rok Cup International Final that will get underway in Lonato from October 11th to 14th. Massimo Dante and Andrea Tonoli will compete in category Rok Shifter.