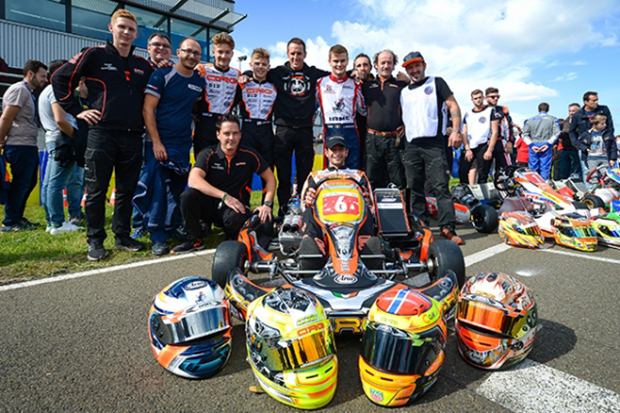 CRG and its line-up of Paolo De Conto, Dennis Hauger, Callum Bradshaw and Lorenzo Travisanutto claimed the pole position at the 24 Hours of Le Mans in the CIK-FIA Endurance Karting Championship and then took the second position in the race after fighting for the victory.

CRG Racing Team’s experience at the 24 Hours Karting in Le Mans ended with an exceptional performance and some regrets, as the Italian outfit and its line-up comprising Paolo De Conto, Dennis Hauger, Callum Bradshaw and Lorenzo Travisanutto just missed out on taking the win by 48s.

After 24h of exciting racing, CRG team closed second and in the same lap of the winners (the French team of Guignet, Bidard, Godefroid and Becq), just missing out on the victory by a whisker. The weekend started on a high for CRG’s dream team, that posted the pole position on Friday with Lorenzo Travisanutto (who has been “borrowed” from team Zanardi to replace the injured Flavio Camponeschi) behind the wheel in the decisive Q4.

The race also started very well (on Saturday at 15:00) and its initial stages were dominated thanks to a race pace that was superior to that of all rivals, to the great work done at the pits and the great strategy managed by the team. Before night fell, the failure of the chain guard and then a reed valve of the Iame engine, made the team fall three laps down. A long recovery –  slowed down by another small issue to the engine, taking advantage of the rain that fell overnight and in the morning, allowed CRG to get back the lead a few hours before the end of the race, fighting for the win with the French team led by Jean Philippe Guignet.

The choice to change to slick tyres early did not play in CRG’s favour and the three pit stops more than the rivals due to the mentioned issues, allowed the French team to get the lead back. At the flag of this fascinating race valid as OK CIK-FIA Karting Endurance World Championship, CRG secured a great second place ending 48s shy of the winners.

This has been a very positive result, especially considering that the rivals have always been competing in Endurance races and have a lot of technical experience and knowledge of this discipline. The end result leaves a bitter taste in the mouth though, as a really deserved  win was missed by the blink of an eye, as shown also by the fastest lap of the race posted by the team.

The performance of CRG chassis has been very positive as allowed several drivers to show their best thanks to a very well balanced and versatile setup, that has been very effective in all racing conditions and different tyre wearing levels. Formula Medicine and Raphael St-Charles have supported the team greatly too, working hard to improve the psychophysical performance of CRG drivers in such a challenging race.

The appointment with the victory for CRG is certainly only just postponed to 2018.