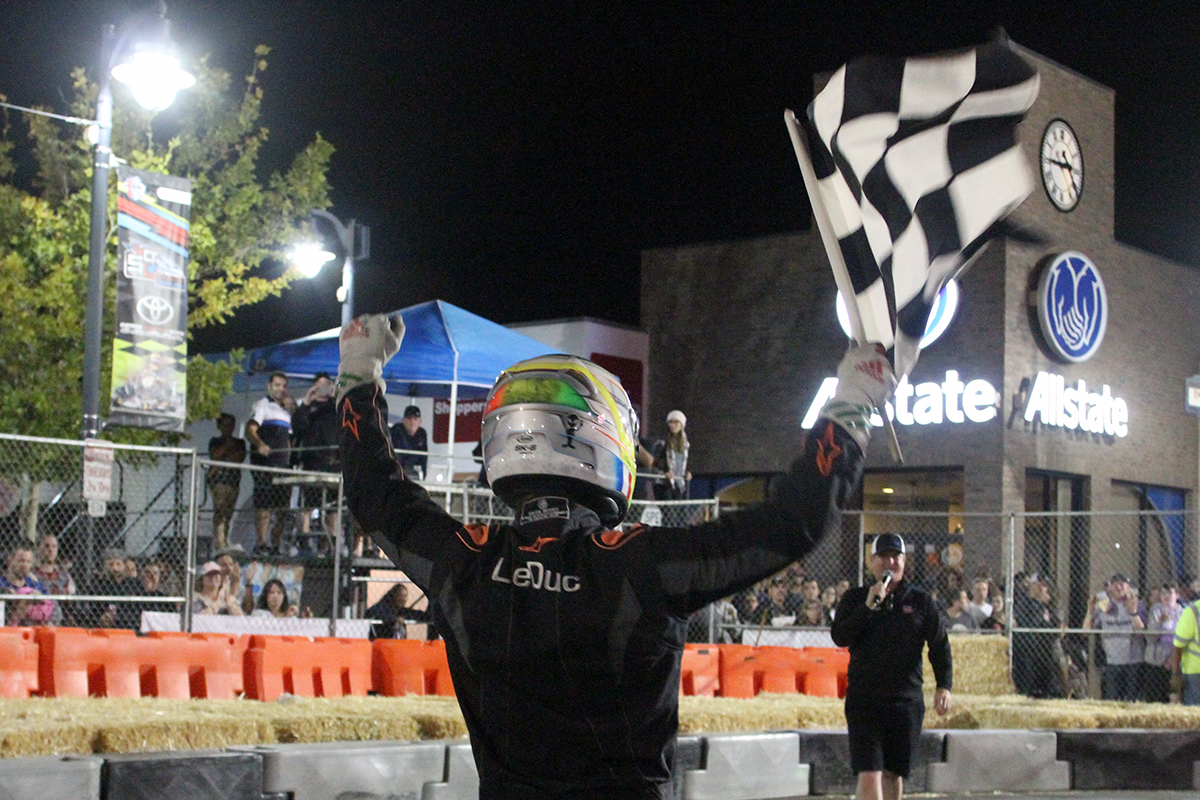 The 2017 Streets of Lancaster Grand Prix brought the Superkarts! USA to the city streets once again. The final round of the California ProKart Challenge is held at the Lancaster, California racing festival contested over two-days. It was record numbers for the event overall, welcoming 193 entries on the weekend with drivers coming from New Zealand, Canada and throughout the United States. Kiwi and two-time winner Matt Hamilton was plastered all over the city on the event’s posters, podium and advertising material. Next year, they will see the Cambrian Go-Karts Sodi Kart of Nic LeDuc.

The S1 Pro/S2 Semi-Pro Stock Honda division was one of two headline categories, contesting a full day of action. Billy Musgrave (Aluminos) took the top honors in qualifying, edging out Hamilton (Aluminos) by 74 thousandths. Hamilton got the edge in the opening heat, with LeDuc following through to second. The second heat race, LeDuc came out the winner with Hamilton and Musgrave trailing. That was the winning move of the event, as the group contested their main event under the lights Saturday evening. LeDuc was able to grab the holeshot from the pole position and lead the entire 20-lap distance for his first SOLGP victory. Musgrave finished second with Hamilton rounding out the podium. Brian Keck (CRG) drove to fourth with veteran Ron White (CRG) holding off a pack of drivers for fifth. 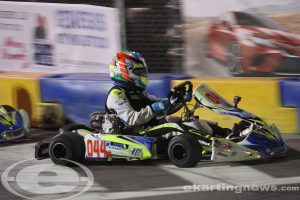 Among those in that pack was Kol Bailey (Praga). The Arizona driver swept the day in the S2 Semi-Pro Stock Honda division for his first SOLGP victory. Jason Pettit (Aluminos) made it a fight, keeping it close to the very end. Cameron Egger (Vemme) completed the podium with Robert Heck Jr. (CRG) in fourth and Josh De Losier (Tony Kart) recovering from a DNF in Heat 2 to fifth.

The second headline division was the X30 Senior category. The race came down to a battle between three drivers. Top qualifier Wesley Boswell (Kosmic), Heat 1 winner Austin Garrison (CompKart), and Heat 2 victor Dante Yu (CompKart). The three broke away from the field and continued growing their lead despite Yu and Garrison swapping the lead. On lap 11, Garrison was running second when the Florida driver made contact with the outside barrier on the exit of turn three. Boswell had no where to go, and the two ended their race on the sideline. This allowed Yu to drive away to the victory by 10 seconds, his first SOLGP triumph. Second came down to two charging drivers. Both Jake Drew (Ricciardo) and Billy Musgrave (Mad-Croc) had issues in the heat races. Each gained 25 spots in 20 laps to finish second and third. Nick Ramirez (Top Kart) was fourth with Worawong Komarakul in fifth. 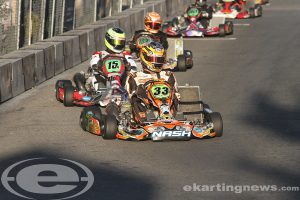 Sunday hosted the second heat race and main events for the rest of the classes on the schedule. The event completed with the S4 Master / S4 Super Master Stock Honda race group. Robert Marks and Rob Logan were the top drivers on day one with Marks (CRG) – the now two-time SKUSA Pro Tour Super Master champion – set fast time in qualifying running in the regular S4 division this weekend. Logan, a two-time class winner was second. The two battled early in Heat 1, with Logan able to pull away with fast laps of the race. They would be joined by Mike Mantel (Aluminos) on Sunday. Mantel finished second to Marks in the heat race, with Logan ending up third. Former S4 Pro Tour champion Gian Cavaciuti (Aluminos) made it four in the main event. Logan and the Italian went back and forth for the lead. Logan was shuffled back to fourth at one point but worked his way back to the lead by lap 17. The veteran racers gave each other room while racing hard, putting on a show for the remaining spectators around the course. Logan was able to hold off to the checkered flag, scoring his fourth SOLGP victory. Cavaciuti placed runner-up with Mantel in third. Marks was fourth with Vivek Tandon (DR Kart) in fifth.

Nick Firestone (DR Kart) dominated the weekend in the S4 Super Master Stock Honda category, sweeping the event. Firestone was just back of the S4 leaders all weekend, leading all 20 laps in the main event. John Crow (GP) bounced back from a Heat 2 DNF, climbing through the field and passing former winner Patrick O’Neill (CRG) for the runner-up spot. Last year’s winner Jonathan Allen (Aluminos) and Jeff Krogstad (CRG) rounded out the top-five. 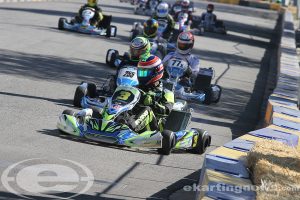 Travis Irving drove to the victory in X30 Master

The X30 Master division was a duel between the two championship contenders. Travis Irving (CompKart) – who scored both heat wins – and top qualifier Jess Peterson (Ricciardo) were evenly matched throughout the weekend, especially in the main event. The two pulled away from the rest of the field with Peterson on the rear bumper of Irving for much of the race. Peterson led for a couple laps before Irving retook the top spot, holding on to the checkered flag for his first SOLGP victory. Ethan Wilson (Ricciardo) won the battle for third over Vatche Tatikian (Ricciardo) with Stuart Hayner (Gold) placing fifth.

Provisional California ProKart Challenge X30 Junior champion Trey Brown was clearly the top driver on day one. Brown set fast time in qualifying and won the opening heat race. Sunday in Heat 2, Brown led until he was shuffled back to fourth late, with Tomas Mejia (Tony Kart) taking the win. The field was jostling for position hard in the opening laps, with Mejia and Brown both involved in incidents that took both drivers out of the race on lap two. This put last year’s winner Oliver Calvo (Top Kart) out front with Joseph Daniele (Tony Kart) and Jace Denmark-Gessel (Tony Kart). The shuffling for position continued with lap 10, contact between Daniele, Jace and Edward Portz (FA Kart). This gave Calvo clear sailing at the front, driving to a second straight victory at the SOLGP. Kameron Perry (Top Kart) advanced up and finished second with Joey Brienza (FA Kart) in third. Bijoy Garg (Exprit) and Jared Korth (Tony Kart) rounded out the top-five. 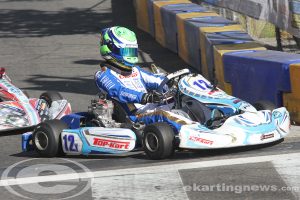 Oliver Calvo defended his victory in the X30 Junior class

Mini Swift was dominated by Kai Sorensen (Energy). The 2016 SKUSA Pro Tour Micro Swift champ drove to the Heat 1 win after securing the pole position earlier on day one. He continued to lead by showing the way through all of Heat 2. Kasey Gillis (Benik) jumped to the lead at the start of the Final, which was red flagged after four laps following a major pile-up in turn three. Once restarted, Sorensen ran away to score the victory. Cole Morgan (Benik) climbed 17 spots to finish second ahead of Steven Grafton (Haase). Rylee Martinez (Benik) and Daniel Inzunza (Top Kart) rounding out the top-five. 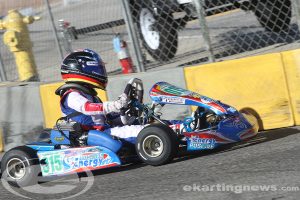 A great battle in the Micro Swift division showed the youngest group of Superkarts! USA could put on a show. Ethan Nascimento (Vemme) was able to go from third to first on the final lap in the opening heat race for the win. Top qualifier Parker DeLong (Benik) came back to win the second heat race after a heated battle with Nascimento. The two broke away in the main event with Nascimento establishing a small gap over DeLong. With fast laps of the race, DeLong reeled in Nascimento and on the final circuit, completed the pass for the lead and the victory. Enzo Deligny (Benik) completed the podium with Ryan Persing (Benik) fourth and AJ Zarcone (Italcorse) fifth.

Briggs 206 made its debut at the Streets of Lancaster Grand Prix today. John Crow (VLR) was the top qualifier, and shuffled back in the heat race, dropping as far back as eighth before ending up fifth. Harrison Mills (Kosmic) was able to came away with the Heat One win while Sonny Cervelli (Tony Kart) reached the line first in Heat Two. The main event was shortened to a 10-lap event after a red flag. Cervelli fought for the victory with David Vasquez (VLR). Vasquez was able to secure the lead on the final circuit, taking the checkered flag first. Officials however penalized Vasquez two position for jumping the start, thus promoting Cervelli to the top step of the podium. Mills was put into second with Vasquez in third. Race Liberante (Mad-Croc) advanced seven spots to fourth with Logan Calvin (VLR) in fifth.