Final Straight in Sight for the 2017 24 Hours Karting 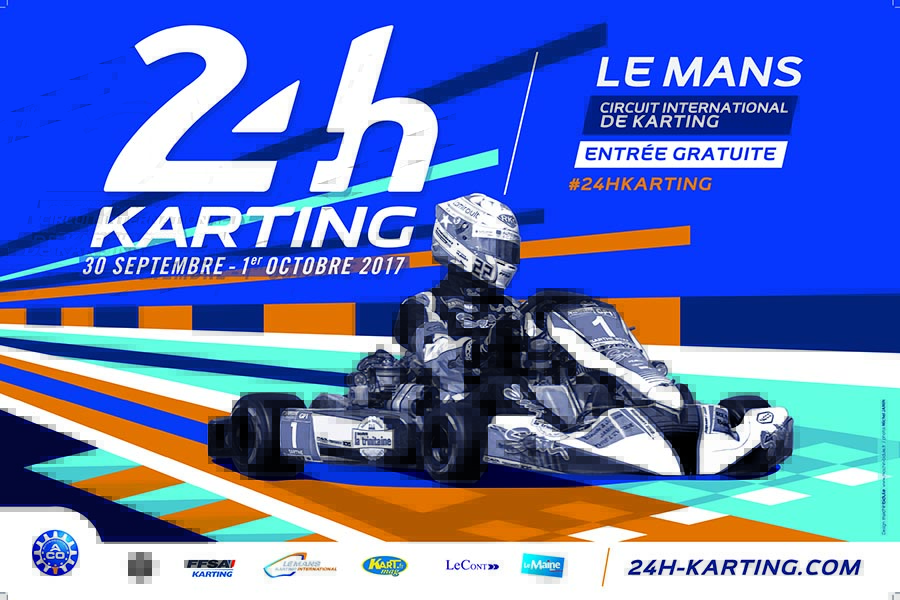 The 33 teams of the 32nd edition of the 24 Hours Karting are beginning the final stage of their preparation. The start of the classic karting endurance race will be given on Saturday 30th September at 15:00 by the Vice-President of the CIK-FIA, Kees Van De Grint, at the Le Mans Karting International circuit.

The spectacle is going to be huge with intense struggles in all categories during the two rotations round the clock.

The battle for victory this year involves three factory teams and some very experienced French teams within a grid of a standard never yet reached in the history of the 24 Hours Karting. 11 GP1 karts, the karting equivalent of LM P1 for cars, will be tested on the 1384 m of the Sarthe track. Lightness and power are the characteristics of these machines powered by OK engines, the latest generation. At the wheel, internationally renowned champions and specialists in the discipline will compete, each with their own strengths.

The competition also concerns the engine manufacturers with a duel between the TM Racing factories on the No. 1 Sodikart and IAME whose Parilla engines will equip the n ° 6 CRG Spa and the n ° 40 Energy Corse. Although not officially involved in the event, Vortex will be represented by private teams who are able to compete with the factories.

CRG Spa (CRG / Parilla) will be able to count on very fast drivers, combining experience and youth with Paolo De Conto (ITA), Flavio Camponeschi (ITA), Dennis Hauger (NOR) and Callum Bradshaw (GBR),  two World Champions and two solid hopefuls. Energy Corse, the third officially entered brand, is no novice in endurance as they have already been involved in previous editions and finished 4th in 2016. The No. 40 Energy Corse (Energy / Parilla) will be led by two European Champions Tony Lavanant (FRA) and Joel Johansson (SWE) alongside Martijn Van Leeuwen (NLD) and Marco Signoretti (CAN).

The opposition will be fierce from the current leaders of the French Endurance Championship. On the podium last year, No. 55 Rouen GSK1 (Sodi / Vortex), is managed by Nicolas Scelles who does not hide his ambitions for revenge. Jean-Philippe Guignet (FRA), Maxime Bidard (FRA), William Godefroid (BEL) and Gautier Becq (FRA) have the strengths to achieve their goal. There is no shortage of assets in the Center 24 Wintec (Tony Kart / Vortex) team with Wilfried Lecarpentier (FRA), Bastien Leguay (FRA), Victor Compère (FRA) and Ulysse De Pauw (BEL).

Jacky Foulatier has put his faith in young drivers this year to lead No. 50 La Manche Kartmag (Tony Kart / Vortex) to success. Théo Pourchaire (FRA), Franck Chappard (FRA), Reshad De Gerus (FRA) and Thomas Mialane (FRA) are by far the youngest on average, aged between 14 and 16 years. The GP2 class is still popular with more than 20 teams at the start. The absolute victory will probably not go to one of these less powerful machines, except in exceptional weather conditions. But the confrontation between the top specialists is not lacking in flavour, especially as the event counts for the French Cup for GP2 at the end of the season. The No. 96 Orsay GSK 2 Willkart (Sodi / Rotax) with Dorian Breisacher, Gwenaël Loison and Xavier Petit leads the provisional ranking against No. 36 Cormeilles Kurb by MD (Sodi / Rotax) with Franck Lavergne, Bastien Borget, Mathieu Melet and Romain Jaloux, followed by Jacques Gauthier, Jean Letard, Gautier Brochard and Pierre-Lou Fleury in the No. 11 Belinois Jac-Kart (Sodi / Rotax). The 2014 Le Mans 24 Hours LMS P2 driver Paul-Loup Chatin, with Leo Payen, Lucas Glinche and Axel Vieira, of team No. 52 Sarthe Objectif 24 (Tony Kart / Rotax) will also take part.

Two teams also demand to be followed throughout the event. Heroism is guaranteed from the all-disabled team Adriakart (Sodi / Rotax) led by Adrien Turkawka, Maxime Léger, Omar Megari and Snoussi Ben Moussa, and there will be a good challenge from the 100% female team of No. 69 RM Ladies (FA Kart / Rotax) with Lydie Valichon, Cathy Briffa, Caroline Martel and Léonie Claude.

The 2017 24-hour Karting programme will also include 24-Minute Youth, a competition for drivers between 10 and 14 years of age in the FFSA Cadet category. The Historic Karts will not be forgotten with the famous Kart Legends who will carry out demonstrations at the Le Mans Karting International circuit.

And finally, don’t forget that access for spectators to the 24 Hours Karting is free for all!