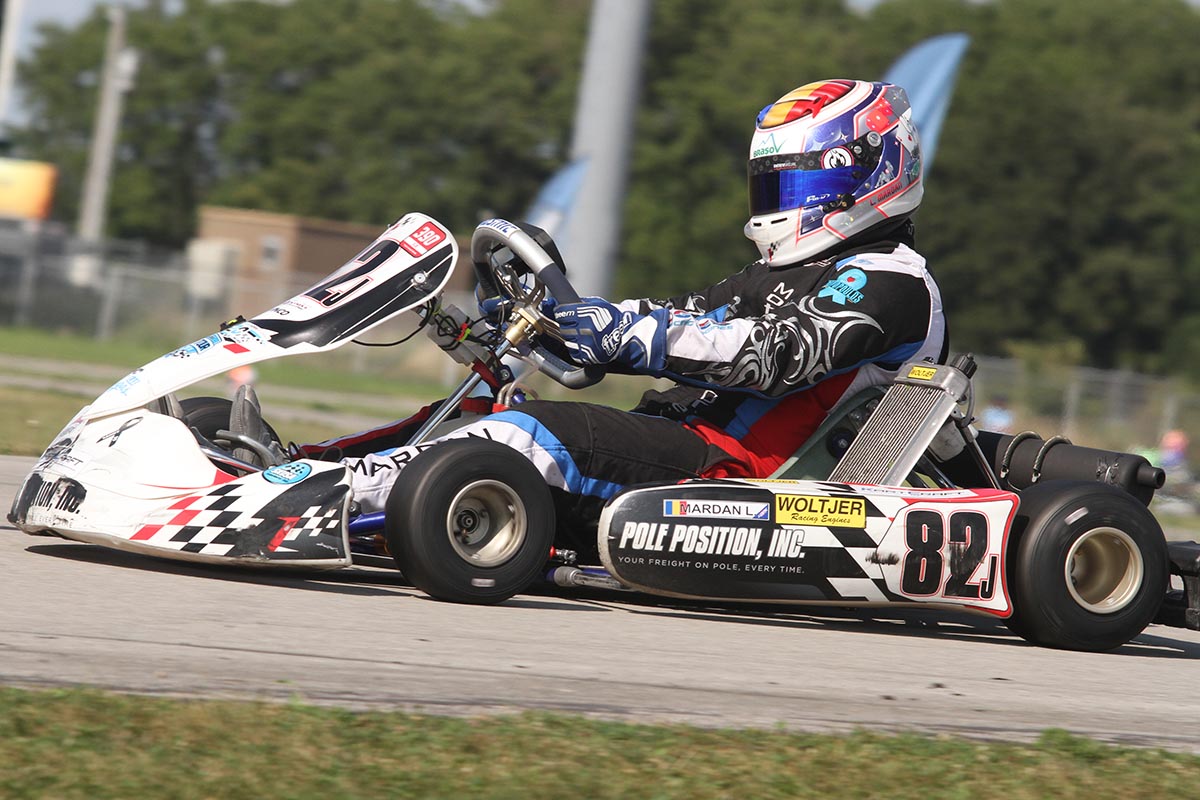 The Superkarts! USA SummerNationals has seen a number of double winners on the weekend since it moved to the New Castle Motorsports Park in 2015. The first year at the New Castle, Indiana circuit, TaG Master driver Chris Giumarra won both feature races, using it to finish the year #2 in the championship standings. This year, Laurentiu Mardan dominated the weekend, performing the first weekend sweep at the SummerNationals since Scott Falcone in 2011 at the Miller Motorsports Park facility.

Mardan has been on the SKUSA Pro Tour since 2015 as a X30 Master competitor. The series saw a large boost in numbers from 2015 to 2016, going from 15 to 25 in the average drivers per event for the series. This year stayed the same through the three events, and the competition level seems to have increase year to year as well. Through his two years at the SKUSA Pro Tour, Mardan’s best finish was a third-place podium result at the 2016 SummerNationals.

The 2017 season was not fairing well for Mardan at NOLA and Simraceway. Heading back to the New Castle circuit was his chance to bounce back. The August 11-13 event was just that as the Romanian who moved to the United States in 2006 showed he had the speed to compete against the best in the X30 Master division. Mardan started the weekend by earning his first SKUSA pole position in his career, clearing the field by over two tenths of a second, including defending champion Derek Wang. The 35-year-old held the top spot throughout the 14-lap Prefinal, getting pressured late by Jonathan Silva. The first 14 laps was Mardan at the point until last year’s SummerNationals winner Mario Barrios took the lead. It was for only a lap as Mardan fought back, retaking the position with Barrios getting shuffled back. Wang stepped up as the lead challenger, with he and Mardan going back and forth for the lead. At the checkered, it was Mardan crossing the line to earn his first career SKUSA Pro Tour victory.

Winning once is tough, but to repeat in the same weekend is even more of a challenge. Mardan returned on Sunday with the hopes of duplicating his accomplishments from Saturday. Step 1 was complete in qualifying, as once again Mardan finished the session with fast lap of the race. This time, Wang was only 63 thousandths off Mardan’s time. The two battled in the 14-lap Prefinal, working back and forth for the lead. In the end, Mardan took the race win. From the drop of the green, Laurentiu paced the field with Wang on his bumper. Wang did not have to win to secure the championship, and made no low-percentage attempts at Mardan. Mostly because Mardan kept enough of a gap on Wang to lead all 19-circuits for the his second victory of the weekend.

Mardan entered the SummerNationals eighth in the championship chase, and with the sweep of the on-track sessions, finished second in the 2017 SKUSA Pro Tour standings. Laurentiu will carry the SKUSA #2 plate for the 2018 season, including the upcoming Superkarts! USA SuperNationals in Las Vegas on November 15-19. 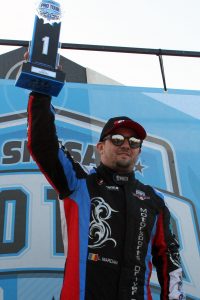 Chassis: Kosmic
Engine/Engine Builder: Woltjer Racing Engines
Sponsors: Pole Position Inc, KartCraft, Oktane Visual, My Family
Series You Compete In: SKUSA Pro Tour , BKC TaG Masters , FRK(RO), FRAS(RO)
Years Karting: 14
How did you get started in karting? At age of 8 at Fagaras Park District in Romania
What has been the high point in your racing career? 2017 SKUSA SummerNationals Double Win at NCMP
What are your goals in racing? Always aiming for best results challenging myself .
In a few words, how would you describe your driving style? Slow starter / faster after
Funniest moment at the race track? Realizing we had pole position but no transponder on the kart at SKUSA SpringNationals 2017 on Sunday.

What do you do when not at the track? Spending as much time as possible with my family , road trips
What are your goals outside of karting? Work hard for a better tomorrow .
What type of street car do you drive? 911 Turbo
What type of street car would you like to drive? So many
What are your pet peeves or things that irritate you? Left lane slow drivers !!!!
What do you think could be done to improve the sport of karting? I think Pushback Bumper will solve a few issues
What are your favorite aspects about the sport of karting? Meeting lots of new people, disconnecting from everyday routine, very competitive field.