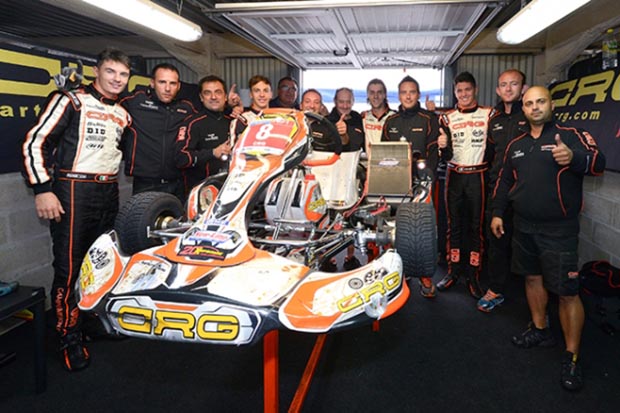 The 24 Hours Karting of Le Mans will get green lights on Saturday September 30th at 15:00 (CEST). CRG will field a team made by Paolo De Conto, Dennis Hauger, Callum Bradshaw and Lorenzo Travisanutto, as the latter will replace the injured Flavio Camponeschi.

The OK and OKJ World Championship being archived, CRG Racing Team is now focusing on a new and exciting sporting challenge: the 24 Hours Karting of Le Mans, a CIK-FIA event for two years now.

The Italian outfit is going to line up a dream team of 4 drivers led by KZ World Champion Paolo De Conto in this challenging race, that is very famous not only in France. Alongside the Italian driver, Dennis Hauger will be at his final Karting race before moving on to the British F4 with Red Bull Junior team, and the British poleman in last weekend’s CIK-FIA World Championship Cullum Bradshow will also be present.

CRG Racing Team’s lineup was to be completed by Flavio Camponeschi, but he has been forced to skip this race due to the injury sustained in the closing qualifying heat at the World Championship. The lineup will therefore be completed by team Zanardi’s Lorenzo Travisanutto.

33 DRIVER LINEUPS AT THE START

Edition 2017 of this race will have 33 driver lineups at the start. This is a unique event, that delivers great image visibility, but also important technical information due to the huge stress it puts on the whole mechanical package.

Team CRG will be led by team manager Glenn Keyaert and will employ a Parilla OK engine. The goal set ahead is to score a strong result after a positive maiden appearance last year, when CRG claimed the pole position and led the race for the first hours.

The Team of the Czech Republic made by Kocka, Bajgar, Goluch and Rihak will also defend CRG colors. The race will get underway on Saturday September 30th from 15:00 and it will be available through live timing at cikfia.com