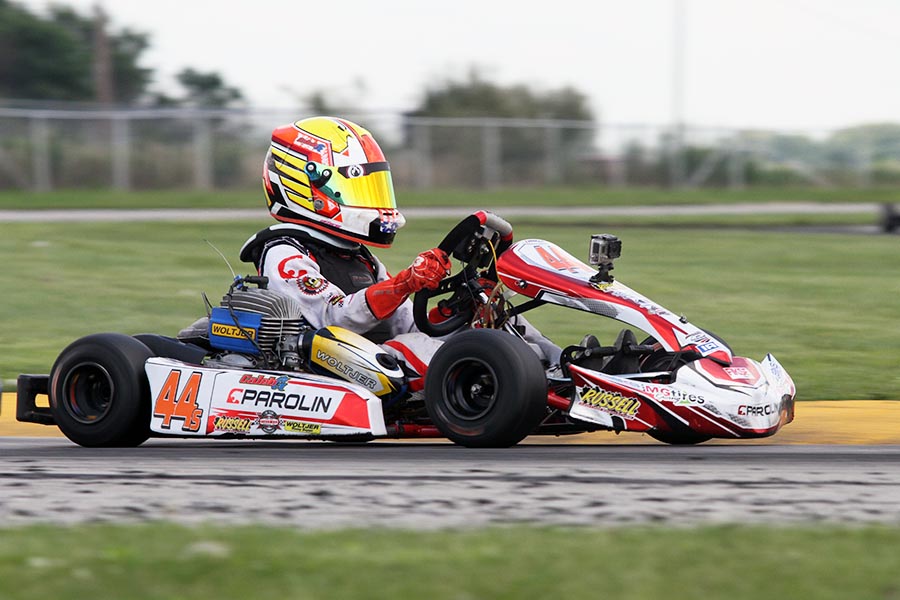 The 2017 season is the second for Caleb Gafrarar in Cadet level racing in the United States. The nine-year-old from North Carolina has had a busy 2017, traveling from coast-to-coast in three different karting championship programs – World Karting Association, United States Pro Kart Series and Superkarts! USA. Mix in local events at his home track in Mooresville, ‘Caleb G’ has garnered a large amount of time behind the wheel in 2017. That track time has helped to earn a string of victories to close out the summer months, setting up for a strong finish to the racing season with the opportunity at a series championship. 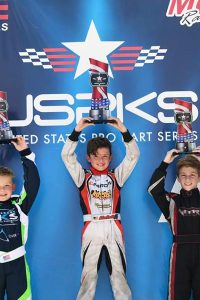 The goal throughout the season was to show well at the Superkarts! USA Pro Tour program, the leading championship series in North America. Finishing 2016 eighth in the Micro Swift championship chase, Gafrarar looked to improve that position in his second season on the Pro Tour. The WinterNationals at NOLA Motorsports Park in March went well, recording two top-five finishes to get the championship underway. The trip west to the SpringNationals in May went the opposite way, recording a best finish of seventh in his first ever visit to the Simraceway Performance Karting Center in Sonoma, California.

Closer to home, Caleb G took on the first three events of the United States Pro Kart Series program in the Micro Swift division. Gafrarar struggled at the opening event in April, held at his home track – GoPro Motorplex – before bouncing back at the Pittsburgh International Race Complex in May with two top-four results.

The third event took Caleb to the New Castle Motorsports Park at the end of July. Day one was good and bad, and finished upside down. Starting eighth, Caleb G took the green flag for the main event. At the opening corner, a driver in front of him was turned sideways, and with no where to go, Gafrarar made contact. The result sent his Parolin machine over, tossing Caleb from the kart. Thankfully, he walked away with no major issues, however, the chassis was damaged beyond repair. 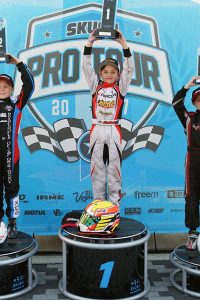 Drivers who are involved in accidents while racing can go two ways – become timid and cautious – or grow more confident when behind the wheel. Gafrarar returned the following day with the latter, going from zero to hero. With a new Parolin chassis under him, Caleb G grew accustom very quickly, qualifying fifth and finishing the Prefinal second. The main event was a battle to the end, taking the lead late, and holding it to the finish line by 0.001 for his first career USPKS victory.

The victory set off a string of wins for the Russell Karting Specialties driver. Two weeks later, Caleb G returned to New Castle for the final event of the SKUSA Pro Tour – the SummerNationals. The first round began with Gafrarar back in 10th after qualifying. He fought his way forward in the Prefinal to end up third, starting inside row two for the Final. A heated battle in the Final commenced, with Caleb G in the middle of it. At the checkered, Gafrarar was able to get away just enough to reach the line first by 70 thousandths of a second for his first career SKUSA victory. Caleb G fought back from a spin in the main event on Sunday, climbing his way back to sixth at the checkered flag. His results on the season placed him fourth in the SKUSA Pro Tour championship standings.

Racing continued at the end of August with a trip up to the Wolf Paving Raceway – home of the Badger Kart Club – in Dousman, Wisconsin for the fourth stop of the WKA Manufacturers Cup Series. Caleb G entered the event with two wins in three events on the season in the Mini Swift category – including Daytona and Pittsburgh. Gafrarar was looking to bounce back in the championship chase after a poor showing at the July New Castle weekend. Caleb G was at the front of the field all weekend in Wisconsin. Saturday ended with Gafrarar earning his fourth podium finish in the series, placing third in the main event. Sunday ended with Gafrarar on top of the podium, escaping with the victory by 80 thousandths of a second. The two results combined to give Caleb G the overall weekend winner award. 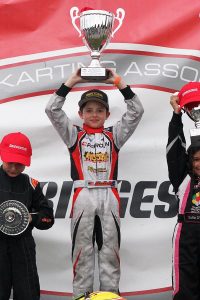 The three victories at the WKA Manufacturers Cup Series program have Caleb G third in the championship standings, with the finale set for GoPro Motorplex on October 13-15. At his home circuit in Mooresville, North Carolina, Gafrarar has performed well in the GoPro Karting Challenge program. Competing in six events, Caleb G has four wins and two runner-up results. The hope is to continue that momentum into the WKA finale for a chance at his first series championship.

Following the WKA finale, Caleb G will end the 2017 season at the famed Superkarts! USA SuperNationals 21. The world’s largest karting event takes place outside the Las Vegas Convention Center on November 15-19. 2016 was the first year Gafrarar took part in the event that welcomes racers from all over the world. A damp track helped to put Caleb G in the 16th position on SuperSunday, with hopes of improving that finish and compete for a podium result this year.