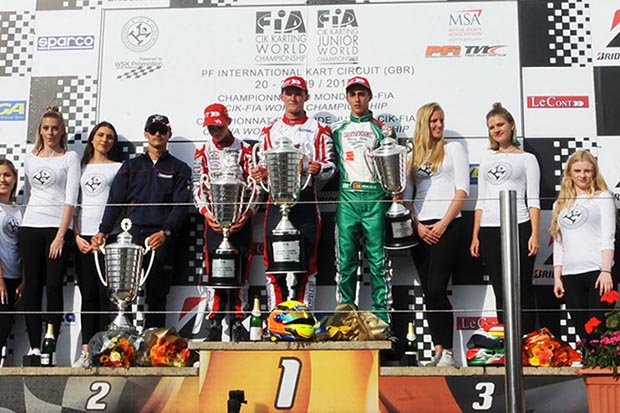 New drivers at the top of world kart racing on the last day of the event. The new champions had already made themselves conspicuous during the qualifying stage, but saved their best performances for the finale of the CIK-FIA World Championship at the PFi Circuit in Brandon (GB). The winners emerged from a pack of participants of 181 drivers coming from 30 countries and from 5 continents. The drivers who took centre stage in the qualifying session – which ended this morning – found new opponents in the eventful and exciting Finals. Some of them managed to step on the podiums even though they finished yesterday’s heats behind the frontrunners.

The World Championship on TV with Fernando Alonso on the grandstand.

F1 driver Fernando Alonso was at the circuit, lured by the interesting programme of the day. All the fans and supporters of this gripping sport will be able to enjoy Alonso’s same emotions thanks to the TV special report, featuring the recap of the racing weekend from Lincolnshire. The appointment on Motorsport.tv is in a week’s time.

Danny Keirle World champion in front of his public. 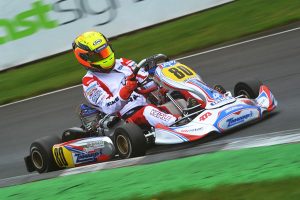 His name is Danny Keirle (Zanardi-Parilla-LeCont) and he is the new CIK-FIA World Champion. The Brit made himself a most coveted present right in front of his public. His success arrived after a qualifying stage where he had put a lot of pressure on his rivals. He started from the pole-position in the Final and led the race during all the 22 laps, despite the gap with his pursuers was always very narrow. The Spanish Pedro Hiltbrand (Tony Kart-Vortex) was, instead, very unlucky: he started from the front row but he had technical problems almost immediately. Eventually, he was forced to retire. Esteban Muth (Zanardi-Parilla) had an excellent start from the 5th slot and trailed in Keirle’s wake until the chequered flag. Unfortunately, the penalty for his misplaced fairing made him drop back to 10th. So, the runner-up was the Spanish David Vidales (TonyKart-Vortex), second also in the Junior Championship in 2016. Third position for the Finnish Juho Valtanen (Kosmic-Vortex), who was constantly behind the leading drivers. In the photo on top, the podium of the CIK-FIA World Championship. 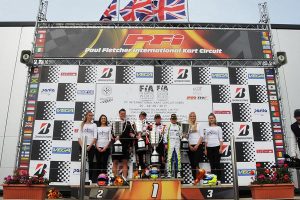 For Harry Thompson (FA Kart-Vortex-Vega) the terrific performance in the qualifying stage – which placed him in the pole position – was not enough: in the Junior Final, the Brit was overtaken by his fellow countrymen in the early stage of the race. Dexter Patterson (Exprit-TM) attacked Thompson and, after exchanging positions for a few laps, Patterson managed to gain the leadership. With Patterson in the lead, his team-mate Christopher Lulham gained the second position overtaking Thompson, who dropped back to third. Zane Maloney (FA Kart-Vortex) from Barbados was one of the expected protagonists, but he lost lots of positions during the tussle of the beginning of the race. In thrilling finale, Patterson was able to keep Lulham at bay, even though the latter tried to pass him until the finishing line. The two drivers, followed by Thompson, finished in this order and Patterson secured the OKJ World title.

In total, seven Americans took part in the event at PFi. Two contested the OK division – Dante Yu and Nicholas d’Orlando. Yu (CompKart) had a best finish of 11th in his fifth and final heat race, ending up 61st in heat points. d’Orlando (CompKart) was 77th overall following the heats after qualifying 34th.

The star for the Red, White and Blue was Florida’s Tyler Gonzalez. The 2016 SKUSA SuperNationals winner secured a ninth-place grid position for the main event after qualifying 21st and placed runner-up twice during his five heat races. Gonzalez ran as high as fourth in the main event until dropping back to fifth in the late laps. A front bumper penalty dropped him down to 17th overall in the final classification as the only USA driver in the main event. Enzo Scionti (43rd), Dillon Defonce (60th), Arias Deukmedjian (61st) and Sebastian Montoya (81st) completed the Team USA roster.