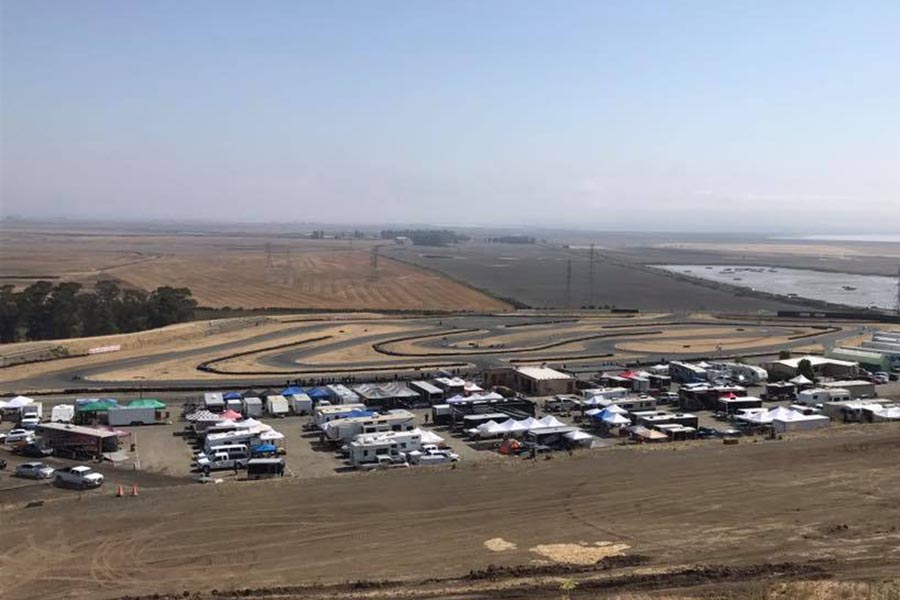 Round 5 of the KPX Karting Championship, powered by Briggs & Stratton, keeps on pace with it’s unbelievable high-average attendance. 103 racers joined the action in Sonoma for Round 5 of the series. The weather was perfect up on the hill with beautiful views of the surrounding area which makes this venue special. Racers and their families started piling in on Friday night, by Saturday afternoon the parking lot was full with lively competition awaiting Sunday’s action packed racing. KPX has been working hard to continue improving the series’ racing and reputation every event. Many racers were pleased that KPX got back to their roots with large lap counts, as the main events were 20 to 24 laps.

KPX President Kenny Manchester stated, “We wanted the racers to be able to work through the field cleanly, with the longer race rough driving would decrease and improve the quality of racing, as racers needed to strategize and adjust to more laps.” KPX also utilized three race directors and their infamous radar gun for the starts.

Honda seems to slowly be taking storm in the Kid Kart class. Six of the eight entries were Hondas. Casey Moyer took pole for the Honda class with a lap time of 1:17.337. Jesus Pulido took the victory in the Pre-Final beating out Tarron Graves. Graves never gave up and took the victory in the Main Event of Pulido by two tenths. Alex Rantala swept the day in the Comer class.

KPX utilized a Novice class in Junior 1 206 to help the newer drivers develop by racing with individuals of the same speed and also let these young racers race for a win. There was a total of 15 karts in the Junior 1 class. The Novice class saw the Baker sisters go one-two in the Pre-final with Sarah beating out her sister Katie. Sarah stayed strong in the Main Event beating her competition by 20 seconds. Landon Kwapich finished in second with Katie dropping to third. Kai Sorensen continues his domination in the Junior 1 class by sweeping the day and taking home the hardware. Ethan Nascimento fought off the guys for a well-deserved second. Stephen Eisert finished third and Jackson Menchu finished fourth. 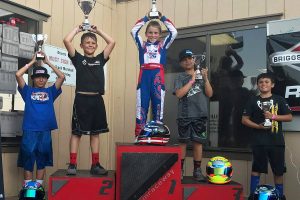 The Junior 2 206 class arrived ready to put on a great show with a 24 lap main event with 21 competitors. Matteo Sandoval started the day off right getting the top spot in Qualifying. Sandoval dropped back to third in the Pre-Final with Ruben Ramos finishing second, giving Garrette Randolph a run for his money but didn’t stop him from taking the victory. The top five racers were within a second at the finish. The Main Event was a show in itself as the top three were within two seconds after 24 laps. Ruben Ramos finished third, Matteo Sandoval edged him out finishing second, but stealing the show was Aiden Kempf who started in fifth and took home the gold.

As usual the biggest show in four-stroke racing came in the form of 33 Senior 206 drivers. Qualifying was close as usual, the top 15 drivers were within a second. David Vasquez took the top spot by only one hundredth of a second. Vasquez dropped to P4 in the Pre-Final where you could throw a blanket over himself up to first place Andrew Kemp. Harrison Mills worked his way through the field to finish P2 and Jess Peterson got the P3 slot. Mills dropped back to finish P4 in the Main Event. SKUSA Pro Tour winner Nic LeDuc pulled off a third place finish in his first series start. Vasquez worked his way back up to finish second but didn’t quite have enough to take the win from Jess Peterson, who has won three of the five events this year. Amazing racing! 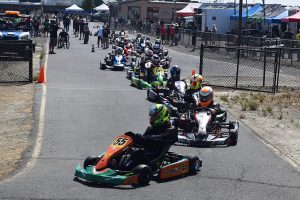 The Masters 206 class had a good showing of 21 karts. Brian Rivera came hungry and took the number one spot in qualifying as he knew he was in second place in points going into this event. Rivera couldn’t hold onto the top spot as Mike Smith and himself fought for the win in the Pre-Final, but Smith came out on top. Mat Kattanek attended his second KPX race of the year and shows he still belongs up front finishing third. The Main Event was a show in itself with the exception of Smith consistently pulling a larger and larger lead to take the win. Second to fifth were only a second off each other. Nathan Lavery P5, Joe Senna – last year’s KPX Masters Champion – finished P4, Brian Gallagher came from sixth to finish third, and Brian Rivera runner-up.

Finally, some World Formula Medium drivers came to play. This was a big shocker to Nick Grossi who had already added the weight to move up to World Formula Heavy. Steven Taylor took the pole position in Qualifying for the Heavy class. Tom Agan won pole for the Medium class. Grossi turned it up a notch in the Pre-final taking the win as Agan continued his sweep of the day in the Medium class. In the Main event we had the Heavies vs. the Mediums as the top four drivers mixed it up. Agan finished his sweep of the day and took the win with Randy Reynolds finishing P2 for the Medium class. Grossi has ran all the races this year at Medium but showed he could win in either weight class by winning the Main Event beating out Steven Taylor and Barrett Barnwell.

This event was very well ran and had some huge names show up to see what they had against the best four-stroke racers on the West Coast. KPX has their final round of racing in Atwater, CA on October 15. The Central California Kart Racing Association is having a club race in preparation for KPX the weekend before on October 8. This is a good time to get well needed practice in to prepare for a huge weekend of racing at KPX Round 6. For more information please visit www.KPXRacing.com.