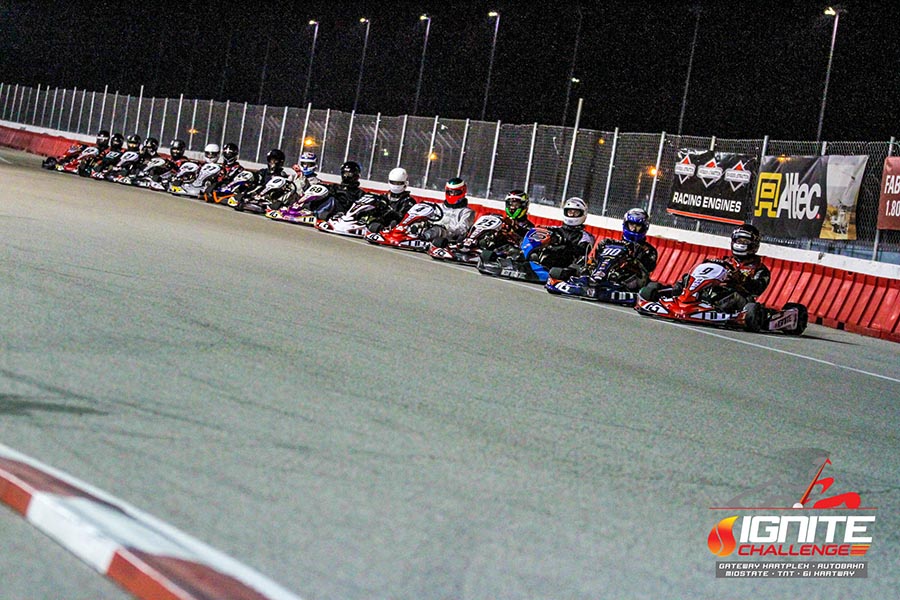 Round number 3 of the Ignite Challenge is in the books after a record entry weekend at the Gateway Kartplex just outside St. Louis. The Ignite drivers took battle on the Kartplex’s “SuperTrack” configuration featuring the combination of both the kart track and Gateway Motorsport’s Park’s road course.

This is the inaugural year for Margay’s Ignite Challenge Series, a 5-race summer series that visit’s all of Margay’s Ignite Series tracks. The goal of the series is to give the drivers an opportunity to affordably travel and compete at a new track without the extensive costs usually tied into a regional or national program along with utilizing the same rulebook across each venue. 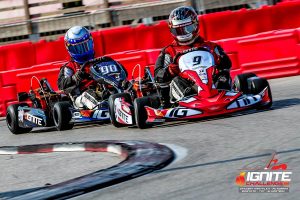 17 Ignite Senior entries took the grid for Saturday night’s race under the lights. Ken Williams would grab pole by 0.021 seconds over Greg Dingess with the top 15 drivers split by less than a second. In the pre-final, a driver error would push the #69 of Williams to mid pack which allowed Dingess to take the lead with Nick Todtenhaupt and Blaine Finnegan following close behind. Dingess would hold off the pack and take the pre-final victory. With a standing start, Todtenhaupt is always the one to beat. On the drop of the green flag, Todtenhaupt cleared the field far before turn one and left them chasing. Todtenhaupt would hold the lead until lap 5 when Dingess made an inside pass down the backstretch. Dingess would keep his head down and take the feature win with Nick Todtenhaupt and “Pistol” Pete Vetter completing the podium.

Ignite Junior saw its largest field of the year with 14 entries. In qualifying, Team Margay WKA standouts, Spike Kohlbecker and Evan Stamer, would grab the front row with an impressive margin over the field. Spike would hold of the pack in the pre-final with Stamer, Hunter Richardson and Davis Worley trailing close behind. Spike would clear the field in the final with mid-pack altercations shuffling the rest of the field up. Point’s leader Evan Stamer would take the second spot with Hunter Richardson rounding off the podium. 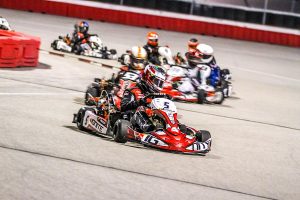 Ignite Masters also saw its biggest field of the year with 20 karts taking the green flag. Pulling “double duty” and earning his second pole of the night was the #69 of Ken Williams. Also running both classes was front-runner Blaine Finnegan. These two drivers could not be split all night. In the pre-final, Williams worked with Finnegan to gap the field, putting himself in position to take the lead in on the last lap. Williams would complete the pass down the backstretch with Finnegan immediately filing back into second place. Coming to the checkered flag, Finnegan would pull the over-under on Williams and take the win by inches. In the final it was a repeat story, Finnegan and Williams would work together and pull away from the field. Williams had been getting incredible runs out of the backstretch chicane all night, that’s where he would once again make his move over Finnegan on the last lap. Knowing Finnegan’s previous “over-under” move, Williams defended the bottom line of the final corner and took his first Ignite Challenge victory.

In Ignite Kid Kart, after trading the lead with both Lane Mayer and Kolin Kiefer, Race Beckman would go 3-for-3 with a victory in every Ignite Challenge race so far this year.

The next round of the Ignite Challenge Series will at TNT Kartways on Saturday, September 30.

For more information on the Ignite Challenge series, visit http://www.margay.com/race-with-us/ignite-challenge.html