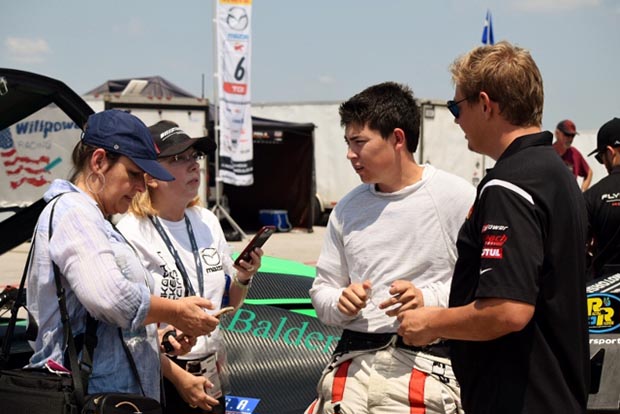 Dakota Dickerson, a Team USA Scholarship winner from 2015, has been busy over the past few weeks, competing both in the F4 United States Championship powered by Honda and gaining his first major sports car experience with ANSA Motorsports in the Pirelli World Challenge — both at Circuit of The Americas. Please check out his latest blog: http://teamusascholarship.org/?p=4036

Hello all! After our most recent visits to Circuit of The Americas in the GTS class in Pirelli World Challenge and rounds 15, 16, and 17 of the F4 United States Championship powered by Honda, I thought it would be appropriate to write a blog about everything I experienced. Firstly, I want to thank Jonatan Jorge of JJRD, Jeremy Shaw from the Team USA Scholarship and ANSA Motorsports for giving me the opportunity to race in the Pirelli World Challenge. 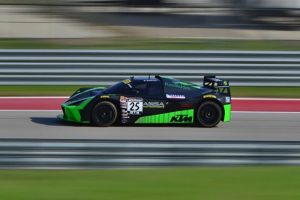 Now, getting to the racing, the PWC weekend started for us with two practice sessions. I spent the first session getting acclimated to the car and track, both of which I had yet to experience. There were a lot of new driving techniques that I needed to get accustomed to. To give you an idea, the Audi-powered KTM XBOW GT4 car that I was driving for the weekend had nearly twice as much power (330 hp) than anything I had yet driven – the next closest car was the Mazda MZR powered Tatuus USF-17 car which puts out 170 hp. With my background mainly in formula cars, this was also my first experience with ABS (Anti-Lock Braking System) and TC (Traction Control). It was a weird feeling being able to push the brakes as hard as you can and not see a hint of tire smoke. Nevertheless, it was fun to experiment with and test the brake zones. It was also a bit of a weird feeling to be wheeling a car around that almost weighs almost 3,000 lbs compared to our nimble formula cars that weigh 1,300 lbs. Lastly, the other main function of this car that I needed to get used to was the fact that it uses an “Auto Shift” system for the upshifts, meaning the car will upshift for you, without any input from the driver. That has its positives and negatives but, again, another great learning experience.

After the practice sessions on Friday I felt very acclimated to the main functions of the car and had some very good pace. I also noticed a big difference in the mentality and goals in comparison to my formula car experience thus far. Although we, of course, wanted to show strong in every session, it was not important to put down quick laps, but rather conserve the car for the race and work on a sector by sector format instead of a full lap-based format. We finished off both days within the top 10 and felt confident for the following day’s qualifying and race.

We went out for qualifying ready to push and put in a good lap time to get us near the front of the 23-car field. Up until this point, the nerves and butterflies hadn’t really set in yet, but lining up next to so many drivers that I have watched over the years was very exciting. We ended up qualifying fourth for Race One, and only a tenth away from the second-place car. All of us at ANSA Motorsports were very happy because we were within striking distance for the opening race, which began with a rolling start. We lined up on the outside of row two but didn’t have a car in front of us because the second-fastest car had been disqualified for a technical infraction.

I pushed hard on the first lap and made a move for second around the outside of Turn Six and then a move for first on the inside of Turn 10 before we went down the back straight. I even surprised myself; I was not expecting to move up to the lead that quickly but I knew the job was far from over. We maintained a solid three-to-four second lead for the first 30 minutes of the 50-minute race until we had some major tire degradation. I slipped back into third position with about five minutes to go, but my engineer for the weekend, Tom Brown, was still giving me words of encouragement and I was pushing as hard as I could. With two laps remaining, I entered the back straight and launched off a large curb on the exit of the hairpin and felt like I had an issue with the engine. The car wouldn’t pull over 4,000 rpms so I pulled over and ended our race in hopes of saving the car. After further data review I discovered that when I went over the curbing, I had unwittingly activated the pit lane speed limiter button which is why the car would not go any faster than what was essentially pit speed! It was disappointing but we got some great data for the car and I gained some very valuable experience. 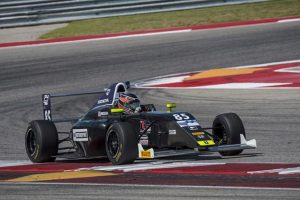 I really wish there was a lot for me to write about for Race Two but unfortunately our race was quite short. Just 16 turns to be exact. We lined up eighth for what this time would be a standing start and then, after losing a few positions, I was fighting hard to regain the lost ground. Going into Turn 16, which is a long sweeping right-hand corner, I was on the outside of two cars. Unfortunately, they made contact with each other and then caromed into our right side, ending our race due to major damage to our right front corner and deranged right rear suspension. It was really just one of those “racing incidents” where not much could have been done by any party involved. Nevertheless, I felt gutted for all of the ANSA Motorsports guys who had worked so hard to get us to the front.

All in all, I thoroughly enjoyed the opportunity and can’t thank everyone who was involved enough. I learned a tremendous amount about the sport that I was not aware of, both on and off the track. If an opportunity comes up again, I will certainly be back in the seat. A review of the action is here (https://www.youtube.com/watch?v=hZG9teBjtCk).

Two weeks later I was back at CoTA for the F4 championship races with Kiwi Motorsport, so I felt very comfortable and confident with some valuable knowledge of the track. We had good pace for the first two practice sessions and then gained a very good draft in qualifying to post the second fastest lap, which put us on the front row for Race One.

I again used the draft to my advantage in the first race to overtake the leader on the back straight. This turned out to be a very valuable move as we had two full-course caution periods that would bring us to last eight minutes of our 30-minute race. We had a good, hard battle at the restart but I had to make do with fourth at the finish. Because of that, I never put a good lap together which meant we had to line up 10th for Race Two. This would be our worst starting position this year but I was confident we could make our way back up through the field. We were doing just that, making a few good passes to get us up to seventh when a school bus drove onto the track – during the race! The officials immediately red-flagged the race and brought us back the pits, leaving enough time for a restart with about 10 minutes remaining.

I was able to make up one more position before the checkered flag to finish sixth. More importantly, my best lap ensured a starting position on the front row for the final race and led to a great battle among the top four drivers. Fellow Team USA Scholarship driver Kyle Kirkwood also was among the mix. We would again finish fourth, just outside the podium, so it wasn’t the weekend we had hoped for but we are still sixth in the points table – despite contesting only nine of the 18 races held so far – and less than 10 points away from third, so the team and I are working hard to have a great showing at the final rounds of the F4 Championship next month.

If you want to see how the F4 United States Championship is helping young drivers transition to cars, SAFEisFAST.com recently published an excellent short video (https://www.youtube.com/watch?v=4zHtcsw9sDw) that features me, Kyle and some other F4 drivers and personnel.

Again, I can’t thank the Team USA Scholarship and all those involved for continuing to play a tremendous role in my career.

All the best,
Dakota