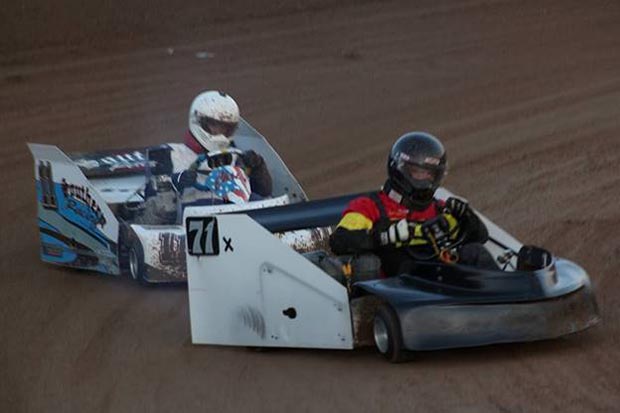 The So Cal Oval Karters made their next to last appearance of 2017 at John Aden’s Wheel2Wheel Raceway on the San Bernardino County Fairgrounds in Victorville last Saturday night.  Thomas Southern, Dillon Hoffman, Scott Gaynor, Buddy Shelton and Brandon Head took home the winner’s trophies on the pleasant High Desert night.

The surprise win of the night was in the Senior 4 Cycles.  Visiting Central California karter Shelton not only won the main by beating the nearly unbeatable Ronnie Benton, but he swept the show winning both heats earlier.  By virtue of winning both heats, he started on the pole in the main and became only the second driver other than San Diego’s Benton to win in the class in 2017.  Benton came home second with Fresno State college student Kyle Labrie third.  John McKinley and Bonita’s Matt Martis finished fourth and fifth.

In the KT100’s it was another Thomas Southern benefit show.  The Hesperia racer had won five of the first seven races of the year.  His only losses came at the season opener when his dad Chris beat him to the checkered at W2W and the road race at Perris where Chris Gibb was the first to the Carly Nigh checkers.

Those losses were not to be repeated on Saturday as like Shelton, Southern won both heats and the main for his sixth victory of the year.  Anaheim’s Tim Erickson, who had not raced in 15 years, and who was driving a 21-year-old kart, took an impressive second place finish.   San Diego’s Randy Truax, Dillon Hoffman of Cathedral City and Art Klein of Las Vegas placed third through fifth.

Hoffman finished two places better in the Open Class than he did in the KT100’s by picking up his first win in the class since April 15th.  Hoffman, who also won both heats, bested class point leader Chris Southern of Hesperia, Scott Bohle of Fountain Valley and Gardena’s Nick Argo, who was making his second ever SCOK appearance, in the main event.

Unlike Shelton, Thomas Southern, Hoffman and Brandon Head in their respective classes, Scott Gaynor did not sweep the program in the F200’s.   He split the heats with class point leader Norm Reynolds of San Marcos and then went on to beat Reynolds to the checkers for his second win in a row.  Gaynor’s daughter, Desiree, finished third.

As stated previously, Head swept the show in the Juniors.  Shane Holt II finished second with Jonathon Pugh, Austin Pugh and Zane Legend rounding out the field.  For Head, it was his fourth win in a row.

Heading into the last two races of the year, the tightest points battle is in the Open Class where Chris Southern has a slender 15-point leader over Hoffman.  Bole is third and is 65-points behind the leader.  Reynolds leads Scott Gaynor by 165-points in the F200’s with Desiree Gaynor third.  Thomas Southern’s advantage in the KT100’s is 88-points ahead of his father Chris.  Ted Marshal sits third in the KT100’s and is just 12-markers behind the elder Southern.  The biggest gap in all the divisions is enjoyed by Benton who has a 230-point cushion between himself and second-place Tony de Almeida of Chino.  Rookie Herzog is third.

After Saturday, the SCOK will only have two races remaining in 2017.  It will be back at Wheel2Wheel on October 14th before closing the season at Perris Auto Speedway on November 4th.  SCOK President Mike Nigh announced that due to popular demand, the season closer at Perris will be on a road course.  The November race was originally scheduled as an oval track event.

To keep up with the So Cal Oval Karters on Facebook, please use the following link:  https://www.facebook.com/search/str/so+cal+oval+karters/keywords_search