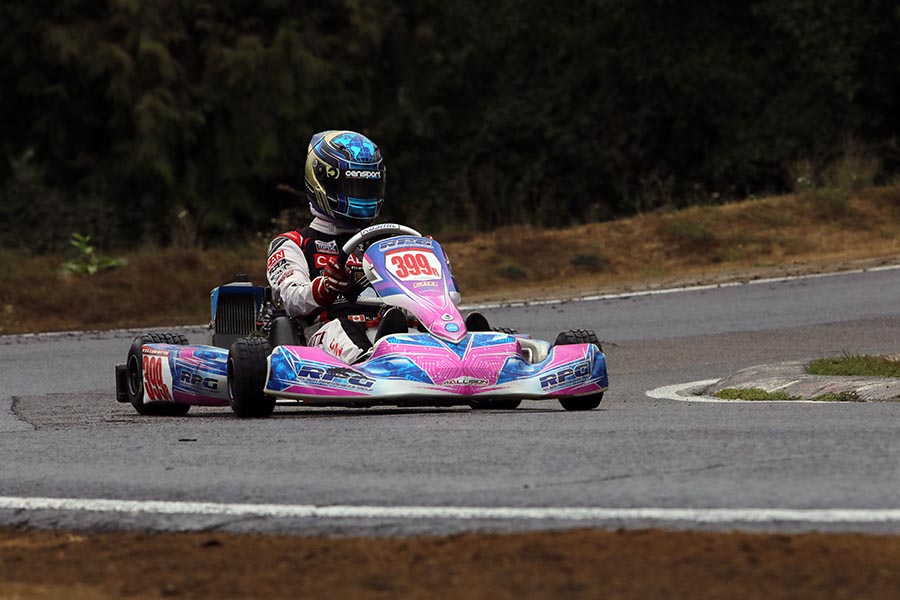 Championship Sunday dawned with sun and cloudy skies at the Pat’s Acres Racing Complex in Canby, OR, but the forecast was ominous, calling for 90% chance of showers in the early afternoon. The finale of the Can-Am Karting Challenge was destined for a significant plot twist as the weather did eventually arrive on the scene.  Rain hit the facility at the end of the LO206 Cadet main event, moving the Junior Max drivers to wets, and that would not be the only wet race of the day.  With the titles on the line, including a pair of tickets to the Rotax Grand Finals, the packed paddock was ready for a great day.  The series boasted its largest turnout ever with 109 entries, as the Can-Am welcomed in the Oregon 2-Stroke Championship, which boosted the numbers in both the Shifter and TaG Senior classes. 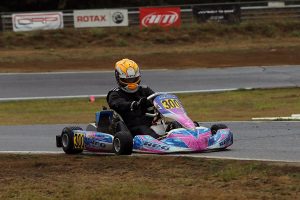 The Senior Max finale was the last race of the day and was run in full wet conditions, which allowed Kellen Ritter (Kosmic) and Luke Selliken (Kosmic) to show off their considerable talents. Selliken won the Prefinal, but was dropped deeper in the grid due to a penalty for pushback bumper penalty, which moved Ritter back to the pole.  The fight for the title was primary, of course, but with Ritter having already earned a Rotax Grand Finals ticket to join Team Canada, Mason Buck (Tony Kart), Kyle Dupell (FA) and Matthew Taskinen (Kosmic) were also in the battle for the opportunity to represent their respective countries in Portugal.  The contenders fell by the wayside quickly as Taskinen lost a chain on the formation lap, and while he was able to get it repaired and back underway, he eventually went down a lap and finished seventh. Buck’s chances ended when he was spun by Jacob Gulick (FA) early in the race, and while he continued, Buck eventually pulled off at the halfway point with a mechanical issue. This left Dupell to stay out of trouble, running at the tail end of a three-kart battle for fourth.  The FA driver did exactly that, finishing fifth on-track, which gave him the points needed to finish second overall in the championship to earn the ticket. Dupell was promoted to fourth in the final tally after Gulick was given a two-position penalty for the contact with Buck.

The scrap up front for the Senior Max win was exciting, as Ritter and Selliken went back and forth for the lead, each taking their turn at the point. Selliken eventually went back to the lead in the late going to score the win, while Ritter’s second place finish gave him a commanding triumph in the championship. Walker Hess (Tony Kart) turned in his best performance of the season to complete the podium in third. 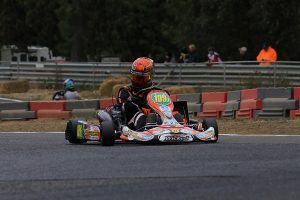 The Shifter classes was expanded to over 20 entries thanks to the addition of the Oregon 2-Stroke Championship drivers, many of whom participated in just Sunday’s Prefinal and Final.  The race was also run in the light rain, and Kyle Wick (CRG) put on another show to jet away to a 6.988-second victory over Zach Pettinicchi (Tony Kart). Matthew Morgan (CRG) came out on top of a great battle with Conner Wick (FA) for the final spot on the podium.  On the strength of five straight wins and a sweep of every session on the year, Kyle Wick took the overall Shifter championship.

Hannah Greenemeier (Kosmic) continued her domination of the Junior Max category, winning the Prefinal to secure the pole for the main. Greenemeier came into the series finale with a Rotax Grand Finals ticket already locked from the US Open / Grand National weekend in New Jersey, so Jason Leung (Gillard) strengthened his chances at winning the Team Canada berth with a second in the Prefinal. Leung had a great battle with Cooper Becklin (Birel ART) that continued into the main, however, with the Final going full wet, it was Marco Kacic (Tony Kart) who emerged as the star, tracking down Greenemeier to pass her for the lead. In drying conditions, Kacic stretched away to a 2.280-second advantage at the checker. Greenemeier finished second, while Leung secured the Team Canada ticket with a solid run to third, which capped a fine season of Can-Am racing.

Billy Cleavelin (Kosmic) dominated the Masters Max battle all weekend long at Pat’s Acres, topping every session from qualifying onward.  Cleavelin jetted away in the Final, leaving Chris Mann (Birel ART) to finish a strong second, securing the class championship in the process, with four podium finishes in five events including a sweep of the mains at the opener in Tri-Cities. Michael Groff (Kosmic) finished third on the day, taking second overall in the final point standings. 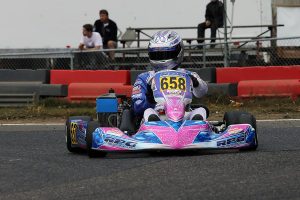 The LO206 Senior class put on a great show all weekend, with a stacked field of 27 drivers taking the green for the Final.  The action was frantic, with overtaking highlighting virtually every lap of the Prefinal and Final.  Joey Wimsett (Ricciardo) topped the Prefinal over Austin Elliott (Kosmic), who advanced from sixth on the grid to challenge for the lead. Cameron Egger (Tony Kart) and Kyle Wick (CRG) were also in the fight up front in the Prefinal, which set the grid for the main.  The 16-lap Final was run in the wet, which made things exciting. Wimsett emerged as the star once again, not surprisingly as the former SKUSA national #1 was on his game at his home track to take the win over Aaron Neliton (CompKart), who did a stellar job working his way forward after a poor qualifying run.  Brady Egger (Tony Kart) completed the podium in third, advancing from ninth on the grid.

Greenemeier ran the LO206 Junior class during the weekend as well, and she came from the tail of the field in a wet Final to assume the lead in the late going. An opening lap skirmish in Turn 10 opened the door for Cooper Becklin (Birel ART) to drive through to the lead, as front row starter Ashton Torgerson was sent off-track while polesitter Josh Pierson (Kosmic) dropped in the field as well. From her lower starting spot, having skipped the Prefinal, Greenemeier avoided the melee and emerged in second.  She would chase down Becklin and would slip past for the lead and a 0.638-second win at the checker. Becklin took second, while Pierson recovered to complete the podium in third. 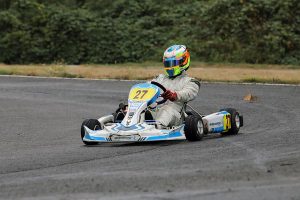 In other action, Graham Trammell scored the win in the exciting LO206 Cadet main event, finishing ahead of Try Arnzen and Parker Sellner. Trammell was quickest in the Micro Swift class as well and was on his way to the victory before he drove to the scales early due to a miscommunication with his crew. This opened the door for Antonio Constantino (Atomica) to assume the lead and the win over Ryland Eagles (Atomica).  TaG Senior drew four drivers to the PARC, and Remo Ruscitti (Italkart) stepped up his game in the Final to drive to the win over Randy Word (iKart) and Zach Pettinicchi. Massimo Valiante (Italkart) was the sole entry in the TaG Jr. 1 class, as was Pierson in Mini Swift and Evan Arnow in TaG Junior.

As a cap to the Can-Am Karting Challenge season, the finale at Pat’s Acres was a major success. Record entry numbers helped fuel a fun atmosphere in the paddock, and plans are already underway to provide another season of growth in 2018. Series promoter Mike Rolison and his dedicated crew have crucial momentum heading into the off-season, and all signs point to yet another strong program next season.