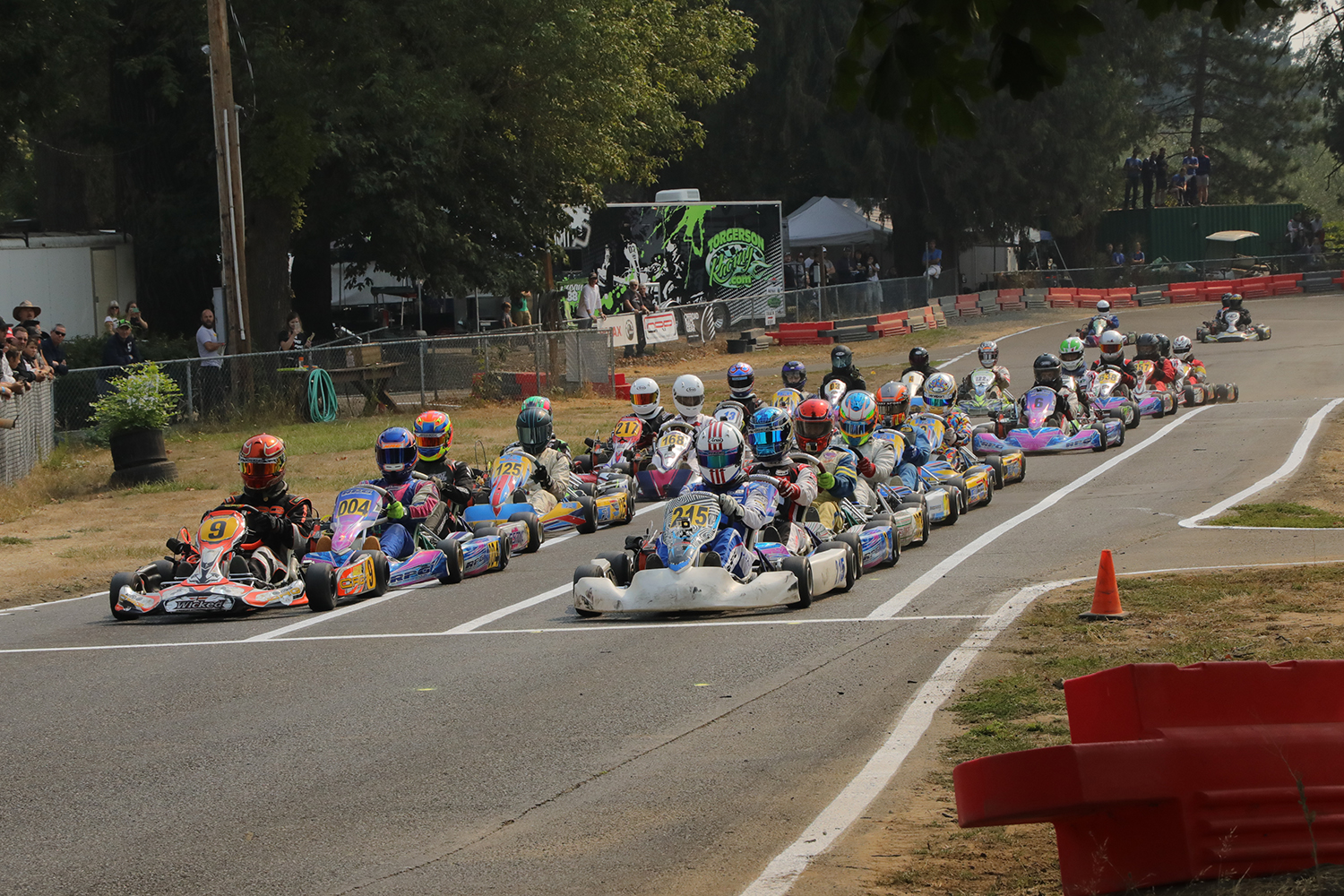 The Briggs 206 Senior class will be an exciting component of the Can-Am Karting Challenge final on Sunday at Pats Acres
(Photo: Dalton Egger)

The final weekend of the 2017 Can-Am Karting Challenge got underway on Saturday at the legendary Pat’s Acres Racing Complex in Canby, OR, with qualifying and three heat races setting the grids for Sunday morning’s Prefinals. The series ran doubleheader formats at the first two events at Horn Rapids and Chilliwack, leading to this unique ‘championship weekend’ that features a single-final format. The paddock at the PARC is packed, with the series posting a new record for entries at over 106 by midday on Saturday. Additional entries are expected to arrive on Sunday, thanks to the fact that the Oregon 2-Stroke Championship has tabbed the Can-Am finale as one of their series races as well.

Rolison Performance Group’s Kellen Ritter (Kosmic) qualified on the pole in the Senior Max class, and he would go on to win all three heat races. Ritter has the pole locked for the Prefinal, and his RPG teammate Luke Selliken (Kosmic) appears to be his primary challenger, having posted the fast lap of the race during his run to two seconds and a third. Selliken will start on the outside of Ritter on the front row of the Prefinal. Current point leader Mason Buck (Tony Kart) posted three top-fives on the day, with a pair of thirds, and looks to have the speed necessary to challenge for the title and the Rotax Grand Finals ticket that will be awarded to the series champion. Canadian Matthew Taskinen has work to do if he wishes to snatch the ticket away from Buck.

RPG’s Billy Cleavelin (Kosmic) swept the Masters Max class, qualifying on pole and winning all three races to secure the pole for Sunday’s Prefinal. Chris Mann (Birel ART) battled with Chad Wallace (Birel ART) throughout the day to see who would challenge Cleavelin, but it remains to be seen who will step forward to challenge the California veteran. Zach Pettinicchi (Tony Kart) topped the TaG Senior qualifying, but when the heats got underway, Randy Word (iKart) emerged as the star, winning the first two races before having to skip the third heat race to attend a prior commitment. In his absence, Remo Ruscitti (Italkart) topped Steve Perdue (iKart) in the third heat race. 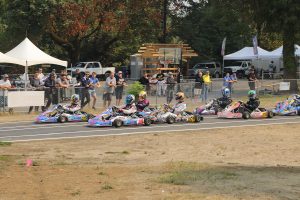 Kellen Ritter is on his game in Senior Max, but a number of drivers challenged him throughout the day
(Photo: Dalton Egger)

Hannah Greenemeier (Kosmic) dominated the Junior Max action all day, topping qualifying before running to three straight heat race wins. Jason Leung (Gillard) ran to second in the first two heats, while Cooper Becklin (Birel ART) impressed in the third moto. Greenemeier has things handled, and will likely run to the win on Sunday to complete her championship season.

In Shifter action, Kyle Wick (CRG) swept the day, qualifying on pole and winning all three heat races. Pettinicchi finished second in the heats and will start alongside Wick on the front row of the Prefinal in what is expected to be an expanded grid on Sunday. Kyle’s brother Conner Wick has stepped up to battle for a podium, but look for Cameron Egger to scrap for second or third as well. We’re not sure if anyone has anything for Kyle, but should the rain arrive, it could all be up in the air.

The LO206 Senior class was absolutely thrilling, with an ultra-strong 27-kart grid bringing everyone to the fence. Jacob Gulick scored the pole in qualifying, but the potential craziness played out in the first heat as Joey Wimsett (Ricciardo) emerged as the victor after a wild final corner battle. Gulick responded with wins in the second and thirds heats over Cameron Egger (Tony Kart) and Kellen Ritter (Kosmic). In truth, the class is still up for grabs. The talent level is high and we all expect this to be one of the best races on Championship Sunday.

The LO206 Junior class features a strong trio of young, talented pilots up front in Greenemeier, Josh Pierson (Kosmic) and Ashton Torgerson. Pierson bagged a pair of wins, while Torgerson paced one to make it all interesting. Greenemeier was in the top-three in all three heats, showing poise and patience that will most certainly make things interesting on Sunday.

Graham Trammell (Kosmic) was the quickest in LO206 Cadet qualifying and then scored the win in all three eight-lap heat races to lock down the pole for the Prefinal. Trey Arnzen is on pace with Trammell and will be expected to work back to the lead battle after a Heat 3 issue dropped him outside the top-three. Trammell also dominated the action in the Micro Swift class, winning all three heats as he battles with the single TaG Junior 1 entry Massimo Valiante (Italkart).

The Championship Sunday racing gets underway at 9:15 am PDT with the run through the Prefinal order. As always, live play-by-play will be available, courtesy of the Rolison Performance Group, on eKartingNews.com.