Another hot weekend greeted the drivers who showed up for Race #7 of the Sanzaru Games Karting Championships at the Simraceway International Karting Center. The drivers were thankful on Sunday when temperatures were only in the mid-90’s compared to the 106 temperature that was recorded on Saturday. Kid Karts ran on the Sunday program for the second time this year and they were the Featured Class. In adding the Kid Karts to Sunday, a one Pre-Main race format was used to assure that all racing would be over by the 6:00 PM mandatory track closure time. With the higher than average temperature, most racers were probably thankful for one less heat race to run on Sunday. The West Coast ROK Shootout also came to an end at Race #7, with the top drivers in 5 Rok classes earning invites to the Rok World Championships in Italy in early October. 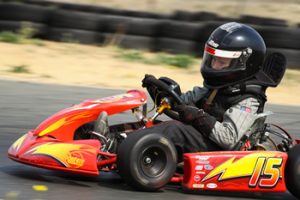 Seven Kid Karts made up the field with Andrew Freire taking the pole ahead of Christian Cameron and Gage Brockway. In the Pre-Main, Andrew, Christian and Gage lead the drivers out of turn one. Andrew went off course and spun with Gage and Christian now battling for the lead. Gage and Christian swapped the lead several times then Christian went off course. In the end, Gage drove onto the win, Casey Moyer coming home 2nd, Sasha Ryabov 3rd, Christian and Andrew recovering to take 4th and 5th. In the Main, Gage and Casey lead the field in the early part of the 10 lap Main with Christian and Andrew working their way through the field. Andrew went off again and recovered to drive himself back through the field. Andrew continued his charge forward passing one competitor at a time. Christian worked his way past Casey into 3rd, with Andrew now up to 2nd and chasing Gage. On the white flag lap, Andrew chased down Gage and made the pass just in time to take the win, Gage a close 2nd, Christian 3rd, Casey 4th and Sasha 5th, Gianmarco Rafacz 6th and Nico Sarphati 7th. The top 3 drivers were awarded Honda Bucks of $30/$20/$10. 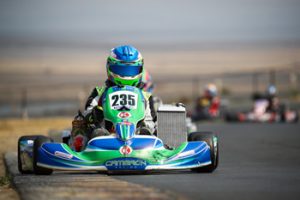 This was the last race in the West Coast ROK Shootout to determine an invitation to the RokCup World Finals in Italy, and the Junior Rok class had three drivers still battling it out for the invitation. Point’s leader Austin Torgerson took the pole ahead of 2nd place points driver Bryson Lew with Christopher Martin 3rd and 3rd place points driver William Ferguson in 5th. It would take a sweep of the Pre-Main and Main for Bryson or William to have a chance to wrestle the invitation away from Austin. In the Pre-Main, Bryson lead the field through turn one with Austin right on his rear bumper. These two drivers pulled away from the field with Bijoy Garg getting by Martin to take over 3rd. By mid-race, Bryson started to pull away from his main rival and drove onto a 3 second win, Austin 2nd, Bijoy 3rd, William got by Christopher to take 4th. Now it was a two person race for the World Finals invite. In the Main, Bryson lead the field out of turn one again with Austin right behind. For the entire 16 lap race, Austin chased Bryson looking for a mistake by Bryson to have a chance by, but as in the Pre-Main, Bryson had a solid long race set up that allowed him to pull away and take the win by 3 seconds, Austin 2nd, Bijoy put in another sold drive for 3rd, William 4th, Christopher 5th and Jenson Altzman 6th. By sweeping both races, Bryson edges out Austin by a slim 5 points to win the Rok World Finals invitation.

The Senior drivers took the first three positions in Qualify with Alejandro Marquez taking the pole ahead of Eric Huang and Zia Harvey. In the Masters class, Billy Cleavelin took the pole followed by Arturo Pacifico and Kevin Moore. In the first Pre-Main, the race ran much like Qualify with the Marquez taking the win followed by Huang and Harvey with the 4th overall going to Cleavelin and the Masters class win with Pacifico 2nd and Moore 3rd. In the Main, Harvey had a good run into turn one to take the early lead followed by Huang and Marquez with Cleavelin pulling away from the rest of the Masters drivers. Marquez then worked his way into the lead with Harvey and Huang still battling when the two came together with Huang able to continue on and Harvey a lap back. In the end, Marquez took the overall win and Senior class win, Cleavelin 2nd overall and the Masters win, Pacifico 3rd (2nd in Masters), John Breidinger 4th (3rd in Masters) with Huang 7th overall (2nd in Senior) and Harvey 8th (3rd in Senior). 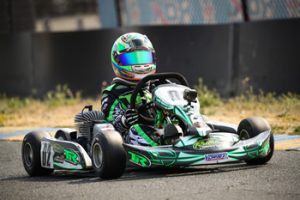 Ashton Torgerson took the Mini ROK pole followed by Parker DeLong and Derek Domingos. Coming into this race, Ashton had secured the Rok Finals invitation, but he was not satisfied and wanted to notch another win for the year. In the Pre-Main, Ashton took the early lead, make no mistakes and drove on to a 5 second victory followed by Nolan Siegel who out dueled Parker DeLong. In the Main, Ashton again took the early lead but Nolan stayed much closer in case Ashton make any mistakes. Again, Ashton drove a mistake free race and came home the winner with Nolan 2 seconds back followed by Parker and Derek. Next for Ashton, pack your bags, you are on the way to the Rok World Finals. 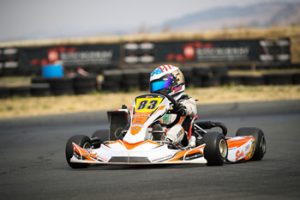 Again the Junior Rotax class produced the largest class of the day with ten drivers. There have been only 2 winners this year in Junior Rotax, Aiden O’Neill with four and Nick Persing with Two, and the expectation was for another head to head duel this day. In Qualify, Aiden took the pole ahead of Dustin Salaverria and Eric Moore with Nick a distant 9th place qualifier. In the 12 lap Pre-Main, Dustin took the early lead with Aiden close behind and Eric battling Christopher Martin for 3rd. This is how the race ended with Dustin taking a one second win followed by Aiden, Eric, Christopher and Nick working his way up to 5th. In the Main, Dustin again took the early lead and opened up a small lead with Aiden, Eric, Christopher and Nick lined up in a fast train but no one having the extra speed to make a challenge for a pass. In the end, Dustin drove onto the win 2 seconds ahead of Aiden, Eric 3rd and his first podium of the year, Christopher 4th and Nick 5th.

A small but potent group came to play with Aaron Farris (Masters) taking pole ahead of Allen Dolph (Masters) and Enzo Prevost (Senior). In the Pre-Main, Enzo assumed the lead early with Aaron and Allen in chase mode but Enzo had to pull off on lap 8 allowing Aaron to take the win ahead of Allen. In the Main, Enzo again got by the two masters drivers early and drove onto a 2 second win ahead of Aaron with Allen 3rd. Enzo and Aaron won the two Italy invitations for their respective classes. 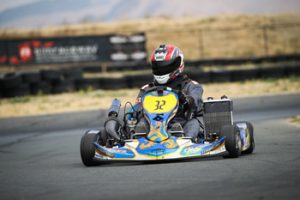 Seven Masters bared the heat and took the green flag. Charles Hastings took the pole ahead of Allen Miller and Dave Holstein. In the Pre-Main, Dave broke on the pre-grid with Charles taking the lead at the drop of the green flag followed by Allen and Roger Cornwall and this is how it ended. In the Main, Allen had a bad start and dropped back to last with Holstein clipping Allen’s rear tire as he tried to avoid the slowed Miller and bent his rear axle forcing him to retire. Hastings took the early lead again, and as in the Pre-Main, he motored away to take a comfortable 10 second win. Cornwall ran 2nd with Bryan Devert 3rd and Miller working his way through the field. Miller got by Devert and was right on the bumper of Cornwall as time ran out. Thus, Hastings the win, Cornwall 2nd, Miller 3rd, Devert 4th and Geoff Provo 5th. Honda Bucks of $60/$40/$20 were awarded to the top three drivers. 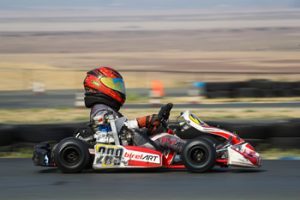 The Micros provided the best racing of the day with Ayrton Tyler taking yet another pole ahead of Ryan Persing and Parker DeLong. At the start of the Pre-Main, Ryan came out of turn one in the lead with the Ayrton close behind. Parker had to get by Harrison Marsh before he could chase down the two front runners, but chase them down he did. Parker got by Ayrton then went into the lead late in the race while posting the fastest lap time of the race. Ryan stayed right on the bumper of Parker going into the last turn where Parker left the door open on the last 90 degree hair pin before the checkered flag and the veteran Ryan surprised Parker and got side by side and was able to sneak across the finish line first, Parker 2nd, Ayrton 3rd and Harrison 4th. In the Main, Parker took the early lead and Ryan stayed on his bumper the entire way. It was again all going to come down to the last turn with Parker in the lead. Parker again swung a bit wide entering the corner and Ryan used his track experience to drive inside and get side up side, some rubbing ensued with the two drivers side by side exiting the corner. At the line, Ryan came across 1st, just 18 thousandths of a second in front, Parker 2nd, Ayrton 3rd, Harrison 4th and Adam Freire 5th. 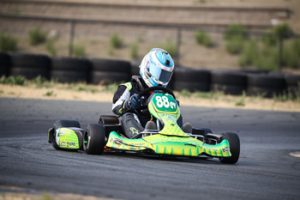 Qualifying saw Alex Keyes taking the pole ahead of Enzo Prevost, Jimmy Casey and Mason Cohen. In the Pre-Main, Alex took the initial lead but was soon passed by Prevost. Keyes then had problems and had to pull off on lap 6. Prevost drove on to a 6 second win, Casey 2nd and Cohen 3rd. For the Main, Keyes’ kart did not make the grid, with Prevost and Casey battling for the lead early on. Casey paced his kart well and took over the lead and held it to the end to take the win, Prevost 2nd and Cohen 3rd.

In Qualifying, Kevin Woods (Masters) took the overall pole ahead of Zach Pettinicchi (Pro Stock), Kyle Loh (Pro Stock) and Travis Bowles (Masters). In the CRF 250 class, Alex Keyes took the pole ahead of Ori Della Penna and Jordan Johnson. In the Pre-Main, Zach and Kevin hooked up to battle the entire way with Patrick O’Neill (Masters) battling Kyle the entire way for 3rd overall. Alex worked his way up to 5th overall to lead the 250 class. In the end, Zach took the win, Kevin 2nd, Patrick 3rd, Kyle 4th and Alex 5th. In the Main, Zach was able to open up some distance on the fast Masters drive and drove home the overall winner and 1st in Pro Stock, Kevin was 2 seconds back and was the Honda Masters winner, Patrick came across just in front of Kyle to take 3rd overall and 2nd in Masters, Kyle 4th overall and 2nd in Pro Stock. Alex was 5th overall and took the CRF 250 class win, Travis Bowles 6th overall and 3rd in the Masters class with Ori Della Penna 7th overall and 2nd in CRF 250 followed by Richard Hilleman who took 3rd in the CRF 250 class. Honda Bucks were awarded to the top three in the Stock Honda classes in the amounts of $75/$50/$30 with Honda Bucks for the CRF 250 class going to the top three drivers in the amounts of $100/$75/$40.