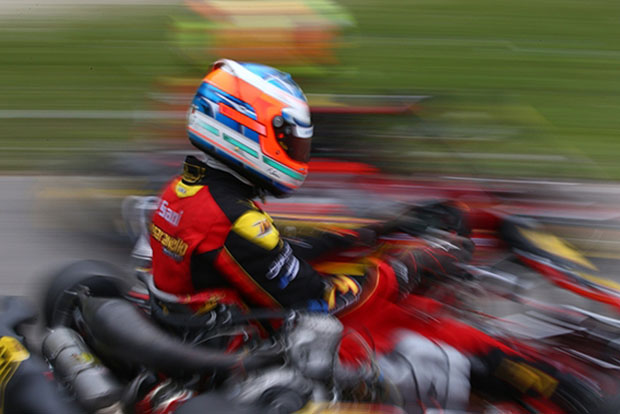 In the CIK-FIA race valid for the International KZ2 Super Cup Marco Zanchetta was slowed down by a racing contact, when holding P2. A real shame for the Italian that had a chance to aim to the podium and maybe even to the victory!

Maranello Kart got very close to scoring a great result in the world round of Wackersdorf with Marco Zanchetta, who put in a superb weekend in Germany!

The fresh Italian Champion Marco Zanchetta, who came back to racing after nearly one year of break being competitive and victorious on Maranello Kart in the Italian Championship just ended, turned out to be one of the main protagonists of this very important race in Wackersdorf valid for the CIK-FIA International KZ2 Super Cup.

ZANCHETTA WOULD HAVE DESERVED A LOT MORE

In Wackersdorf, Zanchetta has been very competitive since qualifying when he posted the second quickest time of his series, that was the tenth absolute place. He later on kept his momentum claiming P3 at the end of the heats thanks to three wins, two second and a third place. Everything seemed to be falling in the right place and Zanchetta managed to run a strong Final, taking P2 early on. Maranello Kart’s driver has unfortunately been involved in a contact with Alex Irlando – who ended up winning the Final – in the heat of the race, losing the position just obtained. This was a real shame as Zanchetta had been a great protagonist of the event up to that point. The Maranello Kart driver rejoined in ninth place after the incident, and recovered several places eventually crossing the finish line in P5 with a good display of competitiveness. Marco Zanchetta could have fought for the podium and maybe even for the victory hadn’t it been for that incident!

Marco Zanchetta’s comment: “It has nevertheless been an exceptional weekend for me and Maranello Kart. I would like to thank the team for the support they gave me during the whole season and in this important International appointment in Wackersdorf. This was my first international race of the season. The Maranello chassis and TM engine have been perfect since the beginning, I only had to adapt my driving to the Bridgestone tyres, but things went well all the way to the Final, where I lost P2 due to a contact and had to rejoin from 9th. I had just taken Longhi but that corner cost me a good final result. I did not expect such a move from Irlando, but I do not complain about anything, this is all part of racing. In Wackersdorf I had a great qualifying session and then run very good heats, both on the dry and wet. I then recovered up to P5 in the Final thanks to a very good race pace. I would have certainly played my cards without that contact, the podium was at reach, but when you are there you try to win and the end result depends on a lot of things. I am happy for my performance anyway. I hope to close the season with a win, maybe in Lonato at DKM or at the Trofeo delle Industrie.”

Nicolas Gonzales also had a solid weekend, closing the Final in eighth place after several good heats, in which he managed to recover from an unlucky P23 in qualifying. The French driver put in an overall good performance, always being competitive until the Final, when he placed the second Maranello Kart in the absolute top-ten of this world championship race.

THE OTHER PROTAGONISTS ON MARANELLO KART

The other Maranello Kart’s drivers experienced some bad luck instead. Flavio Sani was penalized by a poor qualifying that forced him to an impossible comeback in the heats, where he always ended in the top ten. A disqualification from the closing heat due to a not allowed technical intervention (changing the display) on the starting grid cost Sani the final 40th place, a result that relegated him out of the 34 finalists.

The Austrian Cristoph Hold had quite a troubled weekend too, despite several heats closed between P12 and P14, two negative results did not allow him to qualify for the Final (he was 51st after heats). The two German drivers of team Nees Racing Kart Tom Lorkowski (54th after heats) and Stephen Stumpf (76th after heats) had a similar fate.

Maranello Kart’s Manager Luca Iannaccone commented the race in this way: “We unfortunately leave Wackersdorf with some bitter taste in our mouth. Good luck has not been with us for the second time, last year with Tommaso Mosca and this year with Marco Zanchetta. We definitely deserved more and I am sorry for the team that believed in the deed until the end and that did a great work. I thank all members of staff and collaborators that worked hard to keep our brand on top of the classifications.”