Micro Swift driver closes the summer out on the podium 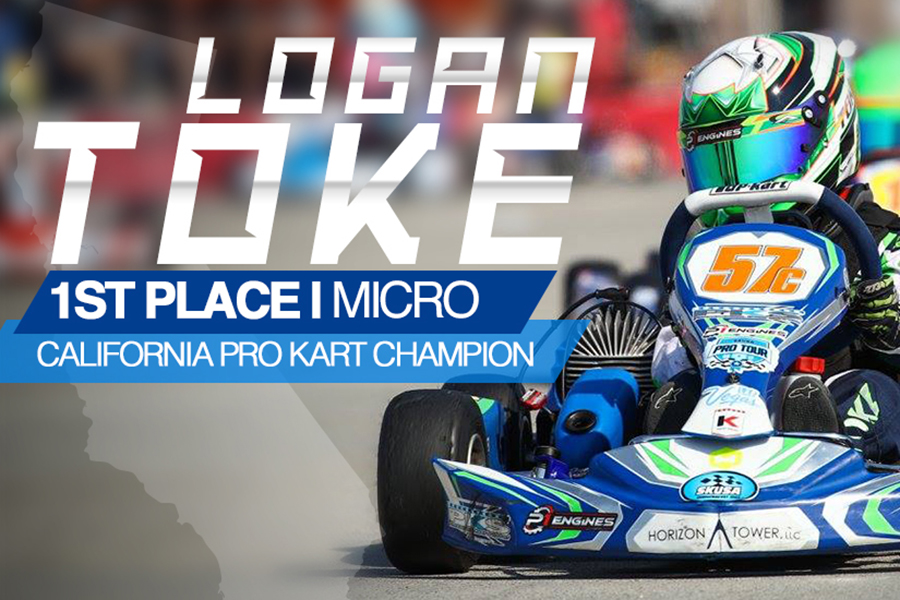 Logan Toke closes out his summer with a month full of racing, travelling both east and west to cap off what has been a successful summer for the Micro Swift driver. The young pilot competed in four events spanning across three different series, travelled to a new track, and brought home two podium finishes, a top-five, and a win between the four events, a successful way to close out the summer karting season.

Logan kicked off his busy month at the end of July at the United States Pro Kart Series (USPKS) race at New Castle Motorsports Park in New Castle, Indiana. It was the young pilot’s first time on the New Castle circuit, and the learning curve was steep but he was focused and determined, picking up speed each session on track. On Saturday, he was forced to retire from the main event early after losing a chain on the first lap of the race. Logan came back on Sunday ready for a shot at a better result. He battled at the front of the pack all day, and ended his day with a second place finish in the main event, trailing the winner by a scant one-thousandth of a second in a drag race to the finish line.

Travelling back to the Hoosier state two weeks later for the SuperKarts! USA (SKUSA) SummerNationals, Logan took what he learned at the USPKS race and put it to work in the competitive IAME Micro Swift field. On Saturday, he had the speed to battle, but retired from the final early with a mechanical issue. Bouncing back on Sunday, Logan drove hard and took home an impressive fourth place finish in the last Pro Tour event of the season.

Heading back to the West Coast, Logan would take part in the seventh round of the LAKC program. Looking to carry the momentum and success from Indiana, Toke was able to add another podium to his 2017 resume with a solid second place result.

Logan’s last event for his summer season was this past weekend at fifth round of the SKUSA California Pro Kart Challenge in Monterey, California. Logan posted a second place qualifying effort to start off his day. He worked his way to the lead in the first heat and never looked back, winning the heat by over ten seconds. He continued to set the pace the rest of the day, winning heat two and earning the main event victory. Not only did Logan extend his championship points lead, it was a great way to close out the summer season for the young and talented driver.

Success is not easy in the world of motorsports and Logan has a group of partners supporting him every step of the way. A special thank you to Horizon Tower LLC, RLV, REV SLO Fitness, NWM Advisors LLC., Cannon Power Group, Top Kart USA, PKS Kart Supplies and P1 Engines.

For more information on Logan Toke or to become part of his racing program, please contact Michael Toke at Michael@MJTAssoc.com.