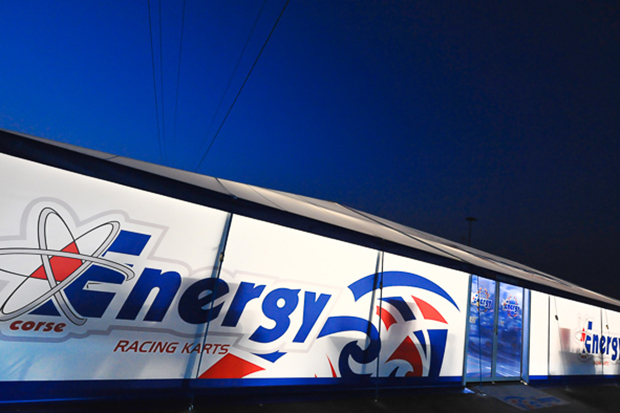 Energy Corse is continuing its podium progression around the world. In Asia, Russia, the United States, Australia and of course in its Italian homeland and in many other European countries, this famouschassis brand increases its status every week in the four corners of the world, in classes as different as KZ, X30, OK or even Briggs and Stratton! Proof of the quality of the distributors and teams that represent Energy Corse with passion, skills and dynamism throughout the season. Meanwhile, the factory team continues to compete at the highest international level, with performances higher still, as the recent Scandinavian event in July has demonstrated…

The Energy Corse European campaign ended with another podium finish in Sweden in KZ2, thanks to Martijn Van Leeuwen’s brilliant race in very difficult conditions. On a slippery track, the drivers were using slick tyres and the Dutch team knew exactly how to react to this unprecedented situation at Kristianstad. Van Leeuwen had already distinguished himself in qualifying by placing in the top five in each of his four heats. Already ranked 4th in May in Belgium and again in the points at Le Mans at the beginning of July, he is now back in 6th place in the final ranking of the 2017 KZ2 European Championship. Sweden’s Isack Sjokvist also made his presence felt, bouncing back from Qualifying.

Throughout the European OK Championship, Théo Nouet demonstrated that he was one of the top rookies in this extremely competitive category. He had two excellent races on his long trip to Scandinavia after climbing onto the second podium of the Summer Cup in Kristianstad, Sweden on 16th July. He also showed off in Finland in the European Championship. On the difficult circuit of Alahärmä, he gained 10 places in the Final to register points for 8th place.

The World events are coming into view

At the European OK-Junior Championship, the young Russian Kirill Smal, who was still racing in 60 Mini in 2016, again gained experience in his first season at this level. His team-mate Frederik Kikkenborg confirmed his progress by gaining 16 places at Le Mans and 11 at Kristianstad on his Swedish home territory.

“The first part of the season was long, but it brought us a lot of satisfaction and confirmation of the performance of our equipment,” said Mick Panigada, the team manager. “Energy Corse has always welcomed young drivers and strives to make progress every year. There will be plenty of room in our awning at the World Championships in Wackersdorf and PFI, whether in the categories with or without gearboxes. We are ready for these important deadlines, as are our engine manufacturers and our various partners. I would also like to congratulate and thank all the drivers and teams who wear our colours. My Facebook page is full of messages about the performance of our chassis around the world. That drives us to always do our best…”

– German Championship (DKM # 4) KZ2 in Wackersdorf: Top five for Martijn van Leeuwen in both races and a victory in the heats