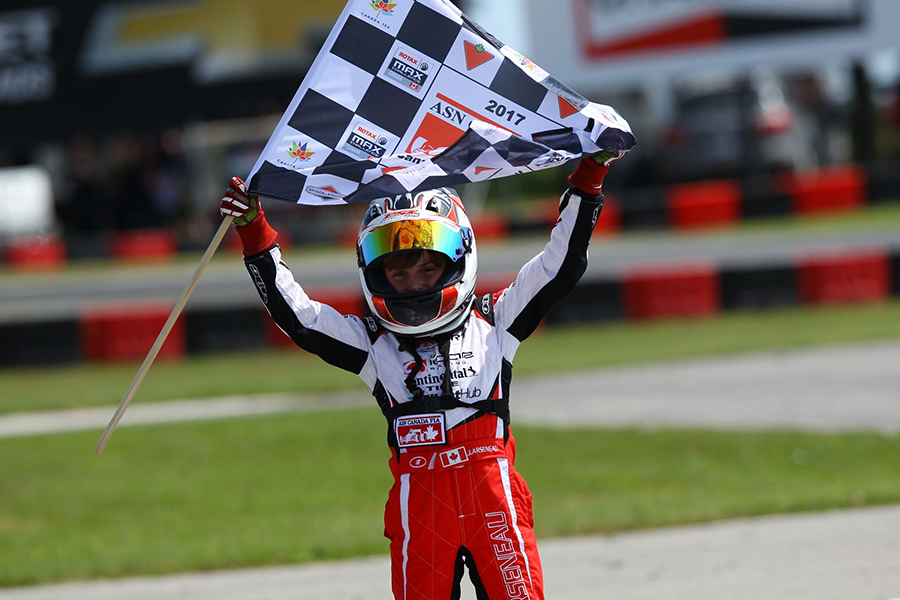 Last weekend was a huge success for kart racing in Canada, as the ASN-FIA Canadian Championships were held in Mosport, Ontario, at the Canadian Tire Motorsport Park. With over 200 entries, there was a certain atmosphere of excitement and passion in the air for all competitors present. For Birel ART / Ricciardo, it was a weekend of success with a sea of red & white karts in the front of every category, claiming five Canadian Championship titles and eleven podiums total.

Beginning with the youngest of drivers on the PSL/BCR team, Justin Arseneau was able to come away as the Champion in Rotax Mini, utilizing the C28 cadet chassis, also used used for competition in 60cc air cooled categories. Coming home as Vice Champion, Andrew Maciel was able to tuck in behind his team mate to make it a one two finish for the duo.

Rotax Junior, a class that can become very heated amongst the early teen drivers, saw Thomas Nepveau, who has also earned a Canadian Championship title, was involved in on track incidents during the pre-final, which set him back to dead last. Thomas was able to finish P4 also setting the fast lap. A notable performance from another strong and competitive team mate all year long, Patrick Woods-Toth, who would not be as fortunate with his final result.

Claiming his third Canadian title, Jeffrey Kingsley remains unstoppable in Rotax DD2, putting his CRY-30-RX in the front for the majority of the race weekend. As well, another driver who did not compete to the extent of some of his competitors, Natael Cantin, was able to finish as Vice Champion in the 2 speed, paddle shift class. Senior Max, composed of some of Canada’s top drivers from across the nation, had David Greco putting in a performance that would see him finish on the 3rd step of the podium, in undoubtedly one of the toughest races of the weekend. And to finish the front brake categories, Prime Power Team’s Simoni was able to pull a P3 in KZ for the team, adding to the already impressive results of the Birel ART Group.

Briggs, which has become one of the fairest classes for affordable competition, broken down into tried, tested, and true format of Cadet, Light, Junior, Senior and Masters competition, had Baxter earn a Canadian Title in Cadet. Ricciardo Kart driver, Chayer grabbed a P3 and Hann (PSL Moncton) P4. In Briggs light category, Lindgreen was also able to bring home a Canadian title for the #redarmy and long time veteran karter, Mike Glaze earned P2 on his Ricciardo Kart.

“Eleven podiums, five titles, we couldn’t be any more proud of the Birel ART drivers across all the teams. Ai Motorsport, PSL Moncton, BCR and Prime Power Team have been incredibly successful this year, all thanks to their own hard work and deception to their own race programs. I would like to send a congratulations to our dealers, our drivers and a very special thank you to all our loyal customers for their continued support of kart racing in Canada. As well, thank you to Birel ART for their never ending desire for success and perfection.” – Dominic Labcreque, Birel ART North American President.

For inquires on how to purchase used race team chassis and equipment, contact info@pslkarting.com or 819-377-5566. To learn more about Birel ART and Ricciardo, visit www.pslkarting.com to shop now or become a dealer. Follow our social media @PSLKARTINGOFFICIAL & FB.com/PSLKarting