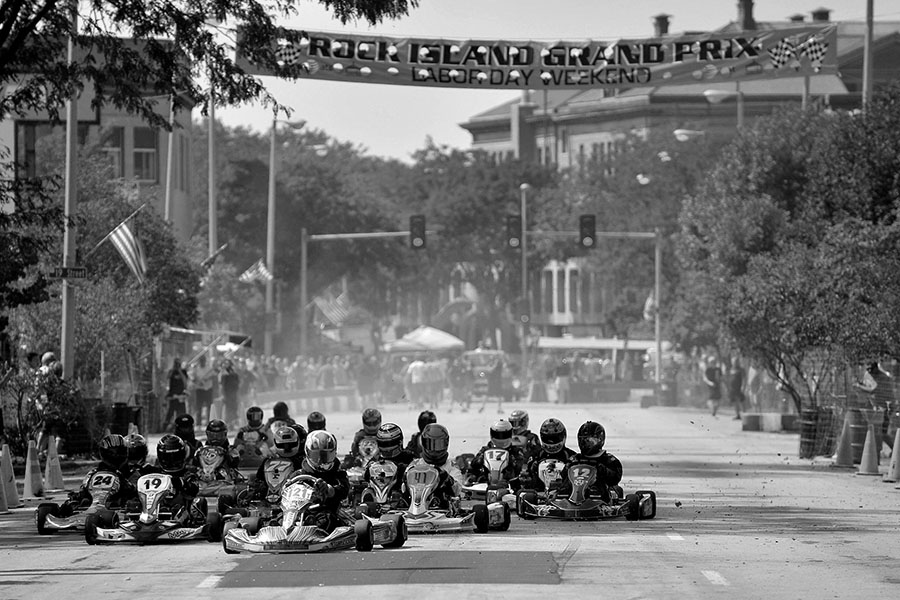 Karters have been waiting for this weekend since Labor Day 2016, the chance to return back to the Rock! As we welcome the start to the new college football season, celebrate the Labor Day holiday, and enjoy that last bit of Summer weather, racers from all over North America will converge on the Quad Cities area for the Xtream Rock Island Grand Prix powered by Mediacom. The non-profit volunteer organization that has put together now the 23rd edition of the RIGP turns the streets of Rock Island, Illinois from a few normal city blocks along the Mississippi River into a racing festival overnight for a chance of fun and excitement on and off the track.

Friday at 5pm, the city streets of Rock Island begin the transformation into a racing circuit with the paddock filling up with racing haulers, preparing for two days of competition on the six-turn street course. Seventeen different race groups will compete on the weekend, each allotted two practice sessions Saturday morning before heat races. Finishing and passing points set the grid for the Sunday main events, with all vying for a chance at earning the coveted Rock trophy with a victory.

eKartingNews.com will once again partner with the RIGP family to produce a live audio play-by-play broadcast from the start-finish line on Fourth Avenue, all part of our EKN Trackside Live coverage program along with social media and forum updates. Tim Koyen is back for his second year on the microphone to call the action throughout the weekend.

Putting Up the Big Number Once Again? 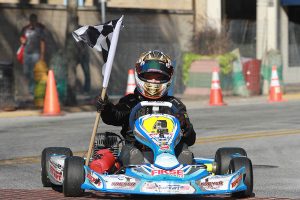 Cal Stewart is back to defend his five victories from last year, along with competing in two more divisions (Photo: EKN)

The story over the last two Rock Island Grand Prix events have been the record performances by Tony Nielsen and Cal Stewart. In 2015, Neilsen set a record by earning six victories in one day, breaking the previous record of five set by Jason Birdsell in 1998. Last year, Cal Stewart was able to secure his first ever Rock trophy, along with four others in his perfect five-for-five performance in Briggs and Yamaha competition.

Stewart is entered in the five classes he won last year – Briggs 206 Medium, Heavy, Heavy 2, Yamaha Medium and Yamaha Heavy 2. Yamaha Heavy was the one class he didn’t enter in 2016, and is set to race in all six for 2017. Making it seven, EKN learned Stewart and Jesse Clossey put together a ride for the TaG Senior category to race in seven classes – a Coyote for Briggs, Merlin for Yamaha and TaG. The same can be said for Neilsen, who came out of last year’s event with two wins, Yamaha Heavy and Briggs 206 Masters. The Margay driver is ready to compete in the seven divisions to match that of Stewart, down one with the drop of Clone from the event. Neilsen sits with 14 career RIGP victories, second overall and 11 back of the Rock Island GP ‘Czar’ Gary Lawson and his 25 triumphs.

RIGP fan favorite Michael Dittmer is also going Ironman, racing in all six Yamaha and Briggs classes similar to Stewart. You can believe the three Briggs and Yamaha categories are going to be among the most heated battles all weekend long. Dittmer is among the many former winners in the field that are attempting multiple classes. Bermuda’s Scott ‘Skitchy’ Barnes has six classes of his own, including three Briggs, TaG Senior, Open Shifter and the famed King of the Streets.

Big Names Back Again in King of the Streets 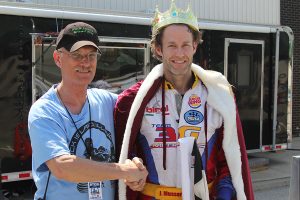 Three-time King of the Streets winner Jordon Musser is making a return to the RIGP (Photo: Joe Brittin)

The King of the Streets is a fan-favorite around the Rock Island Grand Prix as the quickest category of the weekend. It brings together some of the best shifterkart drivers in the sport together for a street fight to find out who has the brass to earn that famous crown and Rock trophy. Canadian Remo Ruscitti is not returning to defend his crown from last year, however, former winners are looking to reclaim it once again against a 20-driver field. Josh Lane and Jordon Musser have experienced the crowning ceremony following their victory on the city streets. Lane won in 2015 and finished runner-up a year ago. The DR Kart driver is the driving force to bring together racers for this weekend, offering another $500 dollars should the entry total reach 30 drivers. Three times has Jordon Musser put on the crown at the RIGP – 2009, 2012 and 2013. Musser knows the limits and the 3G Kart Racing / Birel ART pilot is coming off clinching his second SKUSA Pro Tour S4 championship, earning it just weeks ago at the SummerNationals.

Texan Chris Jennings, Bermuda Barnes, Alex Conlin and Colton Aldridge are veterans of the event, looking for their first KOS crown. A number of drivers are making their first visit to the RIGP, including S2 front-runners Rory van der Steur and Andrew Bujdoso. This year’s King of the Streets should be among the most exciting we have seen in years! 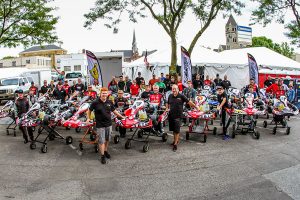 Margay Ignite Shootout is back for a third year, offering three divisions based on age (Photo: Margay Racing)

Among the growth within the Briggs & Stratton #OperationGrassroots is the Margay Ignite program. The spec chassis / engine combination with the ‘Made in USA’ manufacturer featuring the Briggs 206 program continues to branch out as a great path to go from rental karting to competition racing. 2017 marks the third year Margay and Rock Island GP have partnered to offer up the Ignite Shootout. The first year featured one class, with 2016 bringing on a Junior category. This year, a third class was added with Ignite Masters now offered. A total of 52 entries for the three categories, including double digits in the Junior field have the Ignite Shootout ready to be showcased in front of the racing fans.

The full schedule can be found on the Rock Island Grand Prix website and for more, visit www.rockislandgrandprix.com