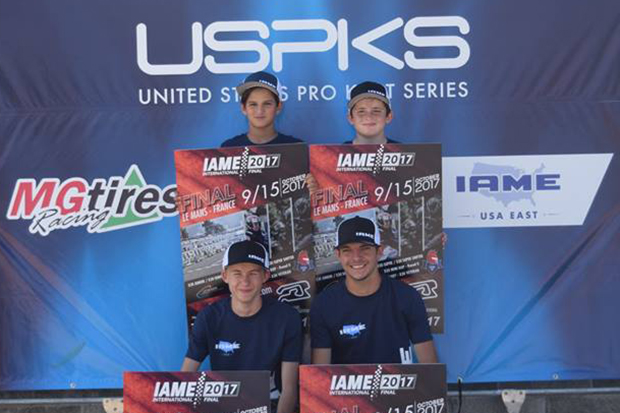 The United States Pro Kart Series (USPKS) led the award parade for 2017, by setting up four drivers with entry packages to the IAME International Final in Le Mans France.  The championship leaders after the New Castle Motorsports Park event (July 28-30) in X30 Pro, X30 Junior, and Mini Swift earned a ticket in their respective age categories to the IAME International Finals, set for October 9-15.  The prize package includes the race entry fee, race tires, engine/chassis rental, mechanic, and support for the event.  An extra ‘entry-only’ seat was secured for the new X30 Mini class that was awarded to the overall weekend winner in Mini Swift at Pittsburgh International Race Complex. The IAME International Final is very close to the final USPKS event of the season, so to allow the winners more time to prepare, the prizes were awarded prior to the finale. These four drivers will also become part of the Team IAME USA 2017.

USPKS pressed the winners for their thoughts on getting a shot at racing in Europe against the best IAME racers in the world.

The first driver to secure a spot on the Team IAME USA roster was 9-year-old Brent Crews, who hails from Denver, NC.  Crews secured an entry to the X30 Mini class by piloting his Nitro Kart to the overall weekend win in the Mini Swift class at the USPKS Liberty GP at Pittsburgh International Race Complex in June.  Crews holds a special honor, by being the first US driver locked in to the Mini class in its inaugural run at the IAME International Final, but he is looking forward more than anything to the “fries and toast”.  Brett has never raced in Europe before, but he hopes to test there at least once prior to the Le Mans event to get accustomed to the “funny looking tires”.  Brent’s favorite part about racing the USPKS is winning a trip to Le Mans and the cool driver’s suit he won last year, although he notes that he has outgrown it.

Miami, Florida driver Santiago Trisini is the other driver who will represent Team IAME USA in the X30 Mini class.  Trisini earned his full ride, which includes race entry fee, race tires, engine/chassis rental, mechanic, and support for the event, by being the points leader in the USPKS Mini Swift class after the Hoosier State GP at NCMP.  Santiago is 11-years-old and has only been racing karts 2 1/2 years, but he was already able to log a race in Adria, Italy in July of this year.  The Benik driver has utilized Woltjer power to put him in a position to showcase his talent in Le Mans, and he is grateful to both Benik and Woltjer for their support.  The excitement and prestige of the event is something that Trisini looks forward to, as well as an opportunity to show his potential and represent Team IAME USA on such a grand stage.  Santiago would like to thank USPKS for the great competition and for giving him this opportunity.  He hopes to bring the trophy home to the USA!

Merlin/Woltjer driver Maks Kowalski has really stepped up in 2017, and his efforts have netted him a full entry to the X30 Junior class at the IAME International Final.  Maks is only 14 years old, but he has already been racing for 9 years, so he experienced beyond his years, including being the only driver who has already competed in the international event (2016).  Maks also competed in the ROK Cup International Final in Europe last year, so he is has the most experience of the USPKS Team IAME USA members.  Kowalski hails from Barrington, IL and he really wants to thank his family for their support this year, especially his grandparents; as well as Team FMS along with Jamie and George Sieracki.  Maks is excited to get this opportunity from USPKS and IAME this year and will do his best to make the most of it.  Maks also noted that his favorite part about USPKS is the push-back bumper and the cleaner racing that it creates.

The fourth and final driver to lock in a spot on Team IAME USA 2017 is KartSport North America driver Brandon Jarsocrak.  At 20-years-old, Jarsocrak has conquered many of the top kart races on American soil, but he has yet to compete in a European event.  He expects the racing to be aggressive but clean and looks forward to racing across the pond for the first time and to be representing the USA there.  Brandon credits his success this year to Praga karts and Woltjer Engines, and wants to thank KartSport North America, AMR, Woltjer, and Race Ready Engineering.  Brandon also wanted to thank USPKS for continuing to work to provide great racing for it’s competitors.

The USPKS is a four event traveling national race series featuring seven classes, utilizing IAME and Yamaha engines.  The series is presented by MG Tires and FISKE Wheels.  The 2017 schedule concludes with the Chicagoland Super Grand Prix at the Autobahn Country Club on September 22-24. For more information, be sure to visit www.uspks.com