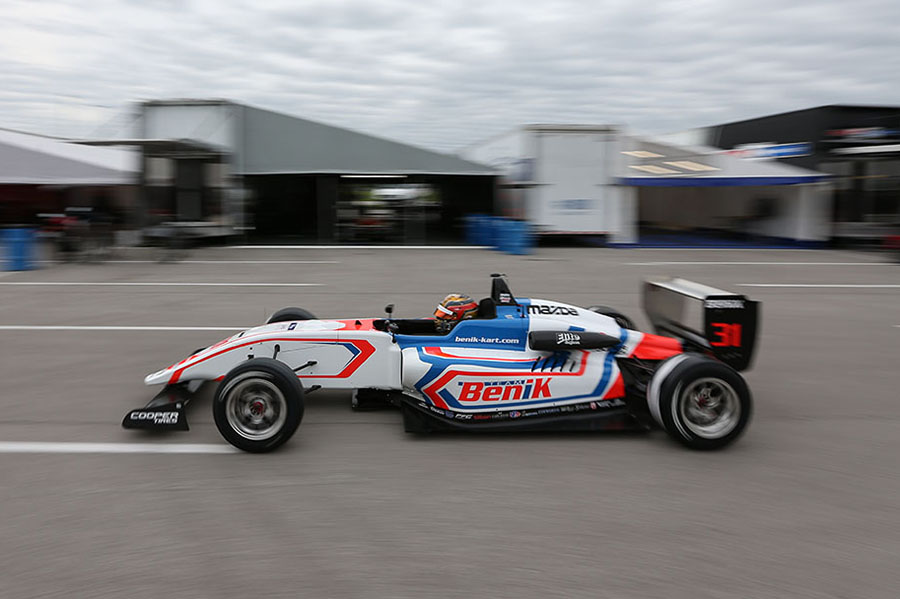 The Team BENIK USF2000 program will be back on track this weekend for the final round of the Cooper Tires USF2000 Championship Powered by Mazda. Taking place at the fast and competitive Watkins Glen Internationals Raceway, Team BENIK will enter Callan O’Keeffe as he returns to the program for the series finale.

“We are really happy to compete in the final event weekend of the USF2000 program as we build towards a full season in 2018,” explained BENIK’s Nick Mitchell. “Our plan was to compete in select events in 2017 and we have done that and performed well. With our focus on this coming weekend as well as the Chris Griffis Memorial Test in October and an intense winter test program, we have plans to compete in the complete series in 2018 with a minimum of two drivers.”

O’Keeffe returns to Team BENIK after competing in the Grand Prix of Indy event weekend at the Indianapolis Motor Speedway. Showing great speed and running in the front half of the field, the South African driver was able to secure Team BENIK’s first top-five finish with a fifth place result in the first of two races that weekend after qualifying sixth. Race two looked to be going better as O’Keefe advanced forward from his sixth place starting position to run fourth before a mechanical issue cut his race short and left him sidelined before the checkered flag flew.

On top of his Cooper Tires USF2000 Powered by Mazda events, O’Keeffe has been competing in the BRDC British F3 Championship and the Henderson Insurance Brokers LMP3 Cup Championship with great success. Scoring five podium results throughout the season, the 21-year-old is hoping his success from other parts of the globe translates into a race win in New York.

For more information on Team BENIK and BENIK Kart, please contact Nick Mitchell or Ben Cruttenden via e-mail to Info@Benik-Kart.com or by phone at 754.206.4870.