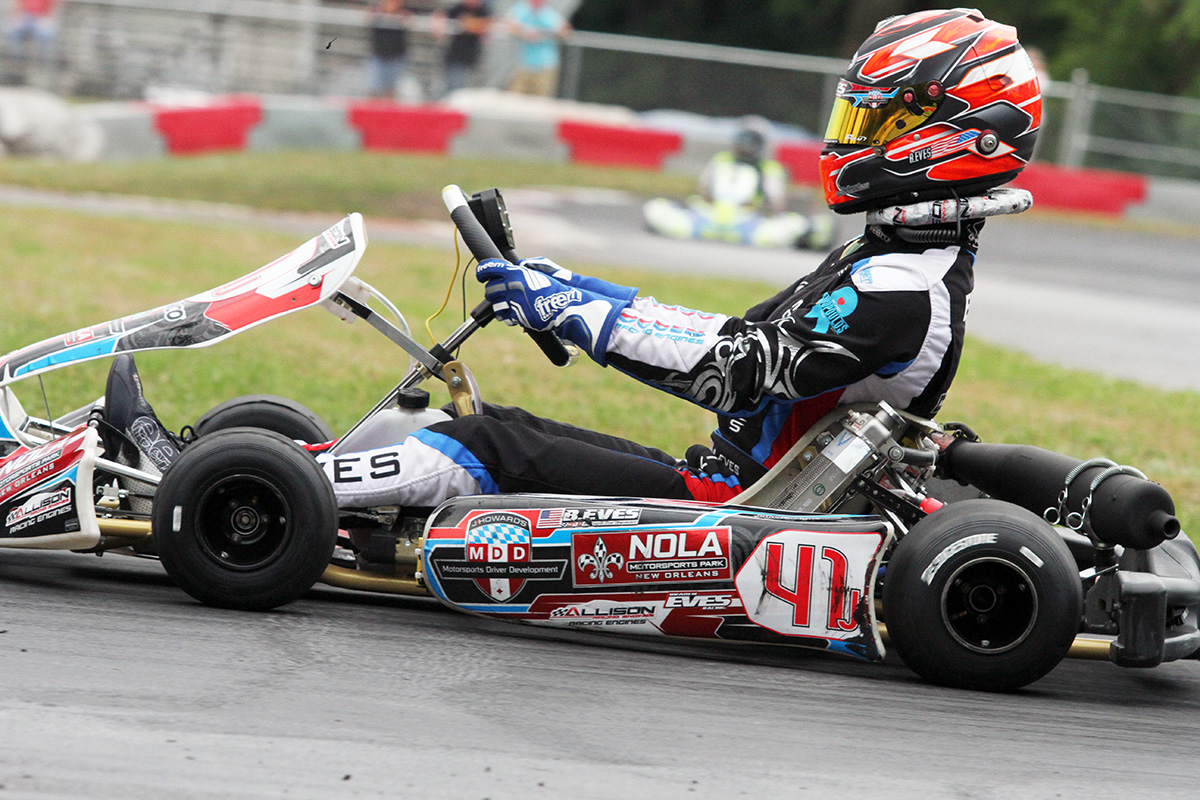 The final day of the Bridgestone WKA Manufacturers Cup Series AMK Race Products Nationals welcomed rain showers to begin the action. Round Eight of the 2017 championship season, and final step in the Mid-Season Shootout, was contested at the Wolf Paving Raceway – home of the Badger Kart Club. Rain welcomed the racers in the morning, making it a wet warm-up and qualifying session. The rain stopped falling through the middle part of qualifying, with the first two Prefinals contested on wet tires. With the track dry for the rest of the day, WKA champion Braden Eves (Zero Error / Vemme) matched the two-win performance by fellow WKA title winner Alexander Kardashian (AMK / Top Kart), scoring both Senior triumphs on Sunday.

Eves began with drive forward in the FranklinKart.com Yamaha Senior division. A flat tire in the Prefinal cost him a chance to battle for the race win. Saturday winner Kardashian went on to score the race win while Eves was scheduled to go from sixth on the grid due to the unique point structure of the Sunday events in WKA. Eves got a great start and was into second by the completion of the opening lap, slipping back to third behind Dakota Pesek (Top Kart) and Kardashian. Eves took back second helping Kardashian to move into the lead. Then on lap 15, Eves assumed the top spot and held on to the checkered flag for his second victory of the season. Kardashian settled for second with Pesek in third, securing the Mid-Season Shootout title. Michael McAndrews (Fullerton) came from 13th to fourth, working past Michael Geringer (Merlin) late in the race. 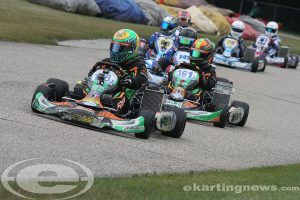 Eves started on the pole position for the main event in the KartSport North America Pro IAME Senior division. Brandon Lemke (Top Kart) and Kardashian shuffled Eves back to third. The two fought for the second position, however, kept Lemke within site. Eves was able to secure the second spot from the Prefinal winner, putting his focus on Lemke. Coming to the white flag lap, Eves grabbed the lead and held on to the checkered flag for his second victory on the day, and second on the year in the category. Lemke crossed second with Kardashian third. Josh Hotz (Franklin / Merlin) and Dylan North (CompKart) completed the top-five.

Austin Schaff (Franklin / Merlin) was able to fight back from electrical issues to go from zero to hero in the Woltjer Racing Engines Pro IAME Junior category. Schaff started the Prefinal last, working up to third to earn a P8 starting spot in the main event. It took him seven laps to climb to the top, and once there, never relinquished the top spot. The win was Schaff’s first on the season. Top qualifier Kaden Wharff (Top Kart) appeared to have the pace to challenge, coming up a few laps short after securing the second spot. Bryce Aron (Kosmic) drove to his first podium finish in third, working past Prefinal winner Kyle Thome (Franklin / Merlin) with championship leader Pauly Massimino (Top Kart) in fifth. Massimino took home the big prize on the day, earning the ticket to Italy for the Mid-Season Shootout winner. 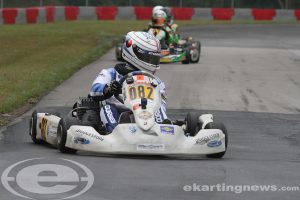 Throughout the season, we have seen the most dramatic racing in the Comet Racing Engines Yamaha Junior division. This was the category when they began the Prefinal, a handful tried dry Bridgestone tires, including Tyler Ferris (Top Kart) and Colin Neal (Vemme) on the front row. They washed out at the first turn, with the rain tire karts showing the way. Elliott Budzinski (Tony Kart), as he showed in Pittsburgh, mastered the wet, drying track to the race win, earning the pole position for the main event. He was joined at the front by a large pack of karts. He and Neal, who started fourth due to the unique point system, battled for the lead early on. They settled down for the middle portion of the race, but with four laps remaining the fireworks began. Contact between Neal and Budzinski sent them off course, with Elliott receiving the worse damage and unable to continue. Neal rejoined, out the top-five. This handed the lead to WKA Winter Cup champion Jack Dorsey (FA Kart), going on to earn his first Manufacturers Cup victory. The fighting continued for second, with Ferris coming up from seventh to earn the spot – along with the Mid-Season Shootout title – ahead of Brian Rettig (FA Kart), who also put in an impressive performance coming from 14th on the grid. Arie Venberg (Merlin) and Emory Lyda (Merlin) rounded out the top-five. 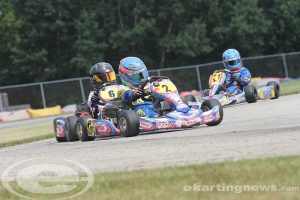 Logan Adams held on for the win in Pro Swift Sportsman, his second victory on the weekend

The IAME USA East Pro Swift Sportsman saw Connor Zilisch (Energy) earning his second victory of the season to tighten up the championship heading to the series finale. Zilisch started second but fell behind Logan Adams (Benik), who started fourth with polesitter Annie Rhule (Energy) slipping back. Zilisch took over the lead on lap five, as the top-five spaced out. A two-minute light rain put the pressure on the drivers not to slip off the course, and also kept the spread out in the remaining laps as Zilisch crossed the line first. With the win came the Mid-Season Shootout title, and a trip to Italy. Adams ran second with Santiago Trisini (Benik) up to third ahead of Schrage and Rhule.

Logan Adams locked up his second victory on the weekend, winning Sunday in Allison Racing Engines Yamaha Sportsman. Brother Garrett Adams (Benik) started on the pole position for the main event after winning the Prefinal. Logan, starting third, took over the lead on lap three, losing it for a lap to Mateo Rubio-Luengo (Benik), before retuning to the point. He remained in the lead with Mateo waiting for the next opportunity. Rubio-Luengo closed up on the final circuit, coming up 21 thousandths short at the line with Adams earning the checkered flag. The consolation prize for MRL – winning the Mid-Season Shootout. Annie Rhule (Energy) came from eight to finish a close third ahead of Sam Hinds (FA Kart) and Garrett Adams. 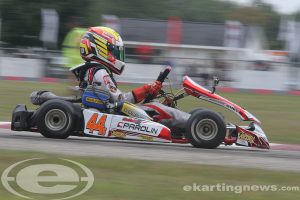 The same top three filled out the front of the field in the CRPRacing.com Mini Swift lead pack. Mateo Rubio-Luengo (Benik) set fast time in the wet and won the Prefinal in the dry. Logan Julien (Tony Kart) and Caleb Gafrarar (Parolin) joined him again, as they battled for the main event victory. Julien became the lead challenger, attempting a few times to work past Mateo. On lap 15, the two went side by side into turn one, making contact and pushing into the barrier. Both were able to walk away, however, unable to continue. This put Gafrarar in the lead with Danny Dyszelski (Benik) now as the lead challenger. Danny looked, but did not complete a pass as Gafrarar earned his third victory of the season to help put him back in the title chase. Dyszelski was a close runner-up as Sofia d’Arrigo (Nitro Kart) finished third, each earning their first podium finish of the season. Championship leader Ben Maier (Nitro Kart) was fourth, securing the Mid-Season Shootout and the Italy ticket, while Cameron Myers put the ‘Made in USA’ Margay in the top-five.

David Kalb came out the winner in the Briggs 206 Senior category. Eric Fagan was top qualifier and Prefinal winner. The two were nose to tail when they were lapped by the Yamaha drivers late in the Final. Contact with one of them ripped off the valve stem on the left front of Fagan’s Track Kart, allowing Kalb to take the victory in his Eagle kart. The WKA Manufacturers Cup Series will wrap up the 2017 season at the GoPro Motorplex in Mooresville, North Carolina with the Grand National event on October 13-15.