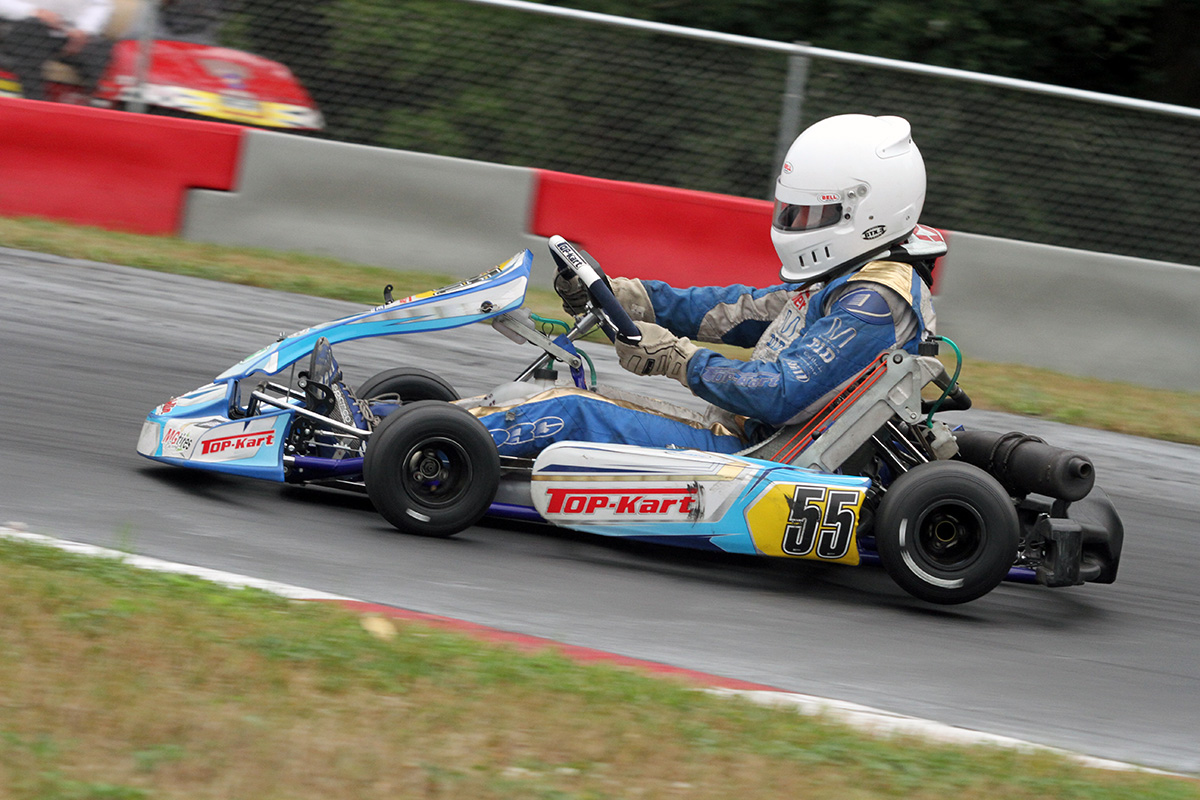 The threat of rain haunted the Wolf Paving Raceway all day long as the first round of competition completed Saturday in Dousman, Wisconsin. The seventh round of the Bridgestone WKA Manufacturers Cup Series at the AMK Race Products Nationals completed qualifying, two rounds of heat races and a main event for all eight categories before the clouds really opened up with rain as the podiums completed. The Badger Kart Club circuit, including the new addition, providing some exciting racing all day, highlighted by two victories for Top Kart driver Alexander Kardashian.

His first victory came in the FranklinKart.com Yamaha Senior division. Kardashian (AMK / Top Kart) swept the event, leading from qualifying through the two heat races en route to the main event victory. A solid field of 18 kept things close throughout the day, including Top Kart teammates Dakota Pesek and Brandon Lemke. Kardashian and Pesek got away at the start of the main, and the two pulled out to a solid lead as the rest of the field fought for P3. Kardashian led all 16 laps, inching away from Pesek for a 1-second advantage. BKC veteran Tommy Andersen (Merlin) was in the third spot until late when Lemke took back the position, securing the podium finish. Andersen fought off Braden Eves (Zero Error / Vemme) for the fourth spot. 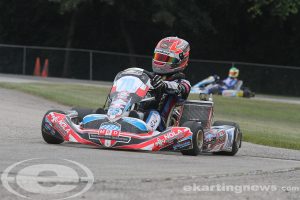 The second, in the KartSport North America Pro IAME Senior class, was one he fought for. Braden Eves (Zero Error / Vemme) was the driver to beat, earning fast time in qualifying and winning both heats to secure the pole position. Kardashian was back in P5 on the grid after missing heat two with a mechanical issue. Eves was joined at the front by Brandon Lemke (Top Kart) as the two went back and fourth early. Kardashian put himself into third and began reeling in the top two with 12 less laps on his tires, posting fast laps of the race. Once by Eves, he set his sights on Lemke. On lap 16, Kardashian worked around Lemke for the lead and drove to his first victory on the year in the class. Lemke settled for second with Eves crossing in third. In tech, Eves was removed from the results for an exhaust infraction, thus promoting Lane Vacala (CompKart) to the third step of the podium. Dylan North (CompKart) and Josh Hotz (Merlin) completed the top-five.

Colin Neal put in a stellar performance in the Woltjer Racing Engines Pro IAME Junior division, securing his first class victory. Neal took over as the lead contender in the heat races after Connor Ferris (Top Kart) qualified on top. The MDD / Vemme driver won both heat races, and started the main event from the pole position. Merlin drivers Kyle Thome and Austin Schaff fought for the second position early, allowing Neal to pull out to a comfortable lead in the opening laps. Schaff put himself into the second position by lap five, however, was not able to close in on Neal in the 16-lap event. Neal scored the victory by three tenths over Schaff with Thome rounding out the podium. Bryce Aron (Kosmic) was a close fourth with Kaden Wharff (Top Kart) placing fifth. 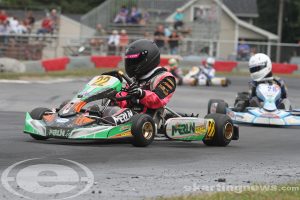 Also scoring a first career victory was Taylor Maas in the Comet Racing Engines Yamaha Junior division. Maas was in contention from the beginning, pushing forward from her sixth spot in qualifying. She finished second to Jack Dorsey (FA Kart) in the opening heat, flexing her muscle in Heat #2 with the win. Starting outside Dorsey on the front row for the main event, she was shuffled back to third behind Tyler Ferris (Top Kart) and top qualifier Emory Lyda (Merlin). Maas moved to second quickly and worked past Ferris on lap five. From there, the Merlin driver led the way with Ferris on her bumper. Unable to make any maneuver, Ferris set up for a drag race to the line. Maas was able to win the race, securing her first WKA victory with Ferris off by 46 thousandths of a second. Elliot Budzinski (Tony Kart) climbed from eighth to the third step on the podium ahead of James Lynch (Tony Kart) and Colin Neal (Vemme).

The IAME USA East Pro Swift Sportsman was a toss up all day. Connor Zilisch (Energy) secured fast time in qualifying while Thomas Schrage (PCR) and Santiago Trisini (Benik) secured the heat wins. Those three filled the first three spots on the main event grid, but sitting fifth was Logan Adams (Benik). Along with Annie Rhule (Energy), the top-five got away with Trisini at the point. Adams worked his way forward, taking over the lead on lap eight with Zilisch following him through. Zilisch took the lead from Adams with three laps remaining. Adams waited till the final circuit, making his move early one. Zilisch tried to fight back, but went off track at turn nine, ending his chance at the victory. That gave Adams the space he needed to reach the checkered flag first for his first WKA victory. Trisini made it a Benik 1-2 with Rhule completing the podium. Schrage finished fourth with Zilisch back in fifth. 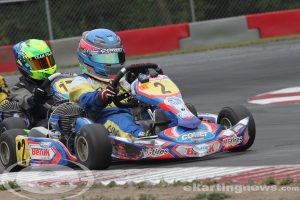 The first class on the lineup was the Allison Racing Engines Yamaha Sportsman class. The nine drivers that made up the field were all able to claim the victory, with a majority of the day spent with the group running nose to tail. In the main event, pole sitter Connor Zilisch (Energy) – who won two heat races – broke away with Mateo Rubio-Luengo (Benik) on his tail. It was decided on the final circuit with the two fighting for the lead entering turn five. Slight contact slowed Mateo’s pace, allowing Zilisch to get away and reach the checkered flag first for his second victory of the season. Rubio-Luengo settled for second with Garrett Adams (Benik) joining him on the podium. Logan Adams (Benik) drove to fourth over top qualifier Annie Rhule (Energy). 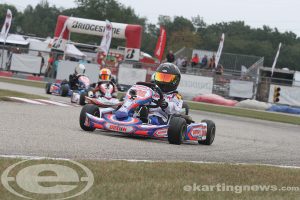 Mateo Rubio-Luengo (Benik) came back later in the day to secure victory in the CRPRacing.com Mini Swift division. Mateo swept the action on the day, hounded by Logan Julien (Tony Kart) and Caleb Gafrarar (Parolin). Both Julien and Gafrarar wanted to be in the second spot, with Julien eventually winning the spot. The local driver tried Mateo on the final circuit, drag racing to the line and missing out by 41 thousandths as Rubio-Luengo scored his third victory of the season. Gafrarar settled for third with Danny Dyszelski (Benik) charging to a close fourth. Cameron Myers gave ‘Made in the USA’ Margay a fifth place result.

The Briggs 206 Senior class featured two drivers. Eric Fagan (Track Kart) swept the action on the day, with the category running at the same time as the Yamaha Senior division. Fagan was able to hold off a charge from David Kalb Jr. (Eagle) in the main event to earn his third victory of the season.