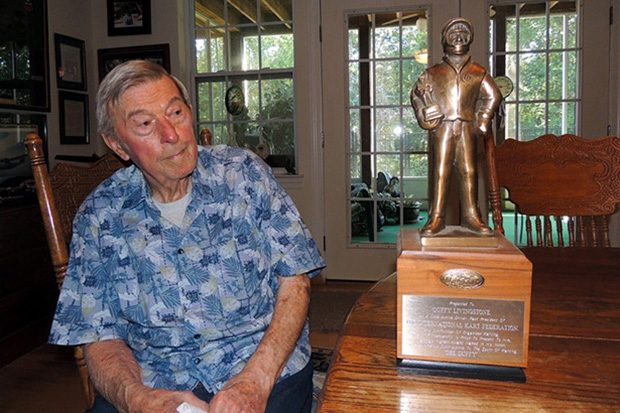 Duffy Livingstone who will always be remembered as the father of the Go Kart died August 13, 2017 aged 92. He was born January 25, 1925. When he was 1 year old Duffy’s parents relocated from Springfield Illinois to Pasadena California. In March 1942 Duffy went to war.

Having survived flying missions over the South Pacific Duffy was discharged in 1946 and returned to Pasadena. He immediately purchased a hot rod from Dave Mitchell who owned Mitchell’s Roadster Shop in Pasadena close to the Rose Bowl. After Duffy purchased the roadster he went to work at Mitchell’s where he learned to weld. Later the business name would change to Mitchell Mufflers. Duffy actually built Mitchell’s first glass-pack muffler; before that mufflers were packed with steel. By 1953 Duffy had left Mitchell’s and together with an old high school pal Roy Desbrow started a muffler business behind a gas station in Pasadena.

At this juncture Duffy became involved with a race car known as the Eliminator, a Ford T- Bucket which was named after the Potvin Eliminator cam. The car raced under number 184; Duffy was in Company 184 in the Navy. This car was more than a match for the sports cars of the day which all had fancy names such as Testarossa and Scuderia Ferrari; so Duffy added Tihsepa to the Chevy powered Eliminator as the model name. It took event organisers a while to figure out that Tihsepa was a dyslexic joke and banned the name. Today there is a Tihsepa kart club called after the famous Eliminator car. Members of that prestigious kart club regularly compete at the Vintage Karting Association Reunion held annually at Riverside California. As to the Eliminator, the aged junkyard dog as one well known car magazine writer referred to it ended up winning first in class at the 2003 Pebble Beach car show considered to be the most revered event in the entire world of automobiles.

It was now 1956 and Duffy and his friend Roy Desbrow had three locations of Duff and Roy’s Muffler Shop in the East Los Angeles area. Duffy had developed a muffler packed with fibreglass and was marketing the units as GP Mufflers, a pun on the shared acronym of Grand Prix and Glass Pack. The glass-packed muffler business was good for Duffy and his partner.

Because of his sports car fabrication and racing activities Duffy often consulted with his friend Art Ingels who worked at the famous Kurtis Kraft plant in nearby Glendale. During a visit to Art’s place Duffy saw the Ingels’ creation; a small tubular frame attached to four wheels at each corner and powered by a lawn mower engine. Art’s invention stuck in Duffy’s mind. He immediately started to construct his own version of Art’s machine after getting the OK from Art, one for himself and one for a friend. Then another friend wanted one and another and another. Duffy then called Art and organised a play day at the Rose Bowl in Pasadena. The Rose Bowl at that time attracted quarter midgets and many of their owners also wanted to know where to obtain these new fangled miniature cars. Duffy drew up plans and put together materials lists and started to supply kits of parts to the converts. At this time Bill Rowles joined Duffy’s team as parts buyer.

The little cars ran at the Rose Bowl for quite a while. One Sunday a newspaper showed up and wrote a story about the activities in the parking lot. The following Sunday the Police arrived. The local residents finally found out where the noise was coming from and that was the end of Duffy and Art’s creations at the Rose Bowl. Other parking lots were found for the week-end activities for the miniature vehicles and again they were moved on because of noise complaints. Incidentally one of the police officers who had to deal with Duffy at the Rose Bowl would eventually end up working for Duffy at the Go Kart Raceway as head of security on race days!

Fabricating the small cars started taking up more and more of Duffy’s time and was becoming a lucrative business. Duffy suggested to his partner Desbrow that they quit the muffler business. A friend who worked in advertising was approached to help them come up with a name for the little cars. Duffy remembers that Dart kart, Zip kart, Fun kart and Go Kart were considered; they finally decided on Go Kart and Go Kart Manufacturing Company was formed located at 152 East Huntington Drive Monrovia California.

Next an organisation had to be created and a set of rules drawn up to enable fair competition and to ensure that safety was paramount for the little cars. Duffy was a founding member of the Go Kart Club of America back in November 1957 (now known as the International Kart Federation).

Finding a place to run the new breed of miniature race car was a concern for Duffy. Land was acquired at Irwindale Avenue in Azusa and a purpose built race course for the little cars was constructed. This was the first track solely for karts in the World and was 0.3 of a mile per lap with 11 turns one of which was a challenging Monza type banked turn. The layout of the Azusa track layout was considered to be so good that its shape was reproduced at many locations through out the United States and further afield.

Unfortunately during 1963 Go Kart Manufacturing got into financial difficulties and Duffy retuned to the muffler and welding business. He still continued to make karts during the 1960’s; one model was known as the Flexible Flyer and was Duffy’s version of a sidewinder kart that was revolutionizing kart chassis design worldwide.

Duffy retired to Grant s Pass, Oregon from Costa Meza, California with his second wife Deedee. There they kept 7 dogs at one time, rescued three donkeys, a couple of goats and a few sheep; Duffy sure liked things with four legs and four wheels. Later Duffy and Deedee would relocate to Tennessee.

Speaking of contemporary karting Duffy admitted that he didn’t go to karting events anymore simply because he did not enjoy the experience. He thought that the younger guys that were racing the modern karts seem to be out to win at all costs. However, he very much enjoyed attending vintage kart meetings.

As well as karting Duffy enjoyed building and flying complex radio controlled multiengine model aircraft. As a young teenager back in Pasadena he worked in a model shop for 75 cents a week. There he developed a fondness for the scaled down aircraft.

Duffy fathered two children, Terry and Kim with his first wife Gloria. He lived in Ooltewah, Tennessee with his second wife Deedee and her son Steve and his wife Jackie. Deedee also had two other children from her first marriage.

In 1939 aged 14 when he started working in the model shop in Pasadena, his given name of Frank gave way to Duffy for some forgotten reason; however his massive contribution to the early days of the sport of karting will never be forgotten.