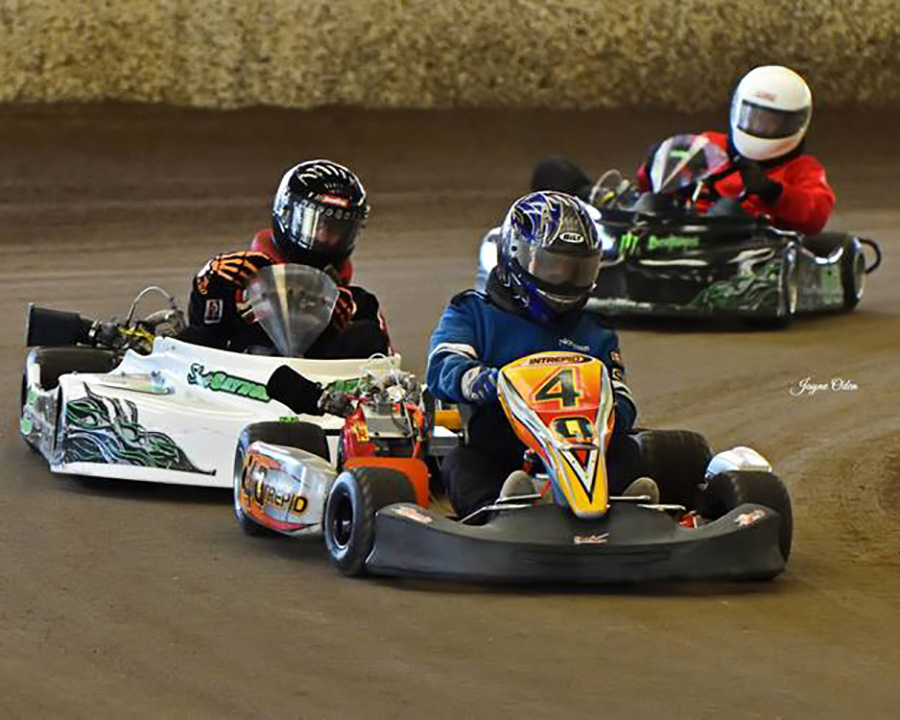 Thomas Southern, Ronnie Benton, Joe Gibb, Scott Gaynor and Brandon were the big winners when the So Cal Oval Karters club made its annual appearance in the beautiful Grand Arena at the Industry Hills Expo Center on August 5. For the first time in the last three years at the annual race, the temperature outside the arena was under 100 degrees. This resulted in the biggest crowd yet to watch the show that also featured the Speedway Sprints and Dirt Karts from Wheel2Wheel Raceway in Victorville and the Norco Mowers.

For the second year in a row, Lakewood’s Joe Gibb bested the field in the Open Class. The slender racer won the rough and tumble affair that saw him tangle with Hesperia’s Chris Southern before the initial green flag and during the hard fought 16-lap main. Cathedral City karter Dillon Hoffman had a front row seat to the battle that was much more exciting than the upcoming Mayweather/McGregor farce will be. Hoffman was poised and ready to pounce if the two combatants took each other out. An eventual tangle between the two warriors, allowed Hoffman into second. He stayed close to Gibb, but in the end, was a kart length shy at the Craig Zimmerman checkered flag. Southern ended up third. Fountain Valley’s Scott Bohle was fourth and Gardena’s Nick Argo, who was making his dirt debut, was fifth. Early in the program, Gibb and Southern won the two Open heat races.

Like Joe Gibb in the Opens, Banning’s Scott Gaynor topped the field F200 field at The Grand for the second year in a row. F200 point leader Norm Reynolds chased Gaynor down and caught him about halfway through the affair, but Gaynor simply pulled away again over the final eight laps to win by a full straightaway. Reynolds stayed in second with Gaynor’s daughter, Desiree, taking third.

Hesperia’s Thomas Southern continued to make mincemeat of the KT100 competition when he won for the fourth time in six starts this year. The point leader led all the way from outside of the front row in the 16-lapper. Bryan Drollinger of Lomita, who competes in the USAC Western Midget Series, took the runner up spot. Chris Gibb, who won the KT100 main event at The Grand in 2016, ended up third with San Diego’s Randy Truax and Brian Phillipson rounding out the top five.

It was business as usual for San Diego’s Ronnie Benton in the Senior 4 Cycles. The Navy man won one of the heat races and then led all the way in the main event for his fifth win of the 2017 campaign. Twenty-three-year-old Anthony Silva, who came down from Merced and who won the other heat race, placed second to Benton in the 16-lapper. Matt Martis of Bonita, Emma Herzog of Anaheim in only her second race and Chino’s Tony de Almeida, who has raced Speedway Motorcycles at The Grand, finished third, fourth and fifth.

The Juniors were also on hand at The Grand and Brandon Head swept the show winning both heats and his third main event of 2017. Caden Kane took second to the winner. Shane Holt of Riverside had mechanical ills and was unable to start the main.

The CLS only has three races remaining on the 2017 schedule. The next will come when it journeys back to Wheel2Wheel Raceway on the San Bernardino County Fairgrounds in Victorville on September 9th.

To keep up with the So Cal Oval Karters on Facebook, please use the following link: https://www.facebook.com/search/str/so+cal+oval+karters/keywords_search

The Grand Results (with starting positions)