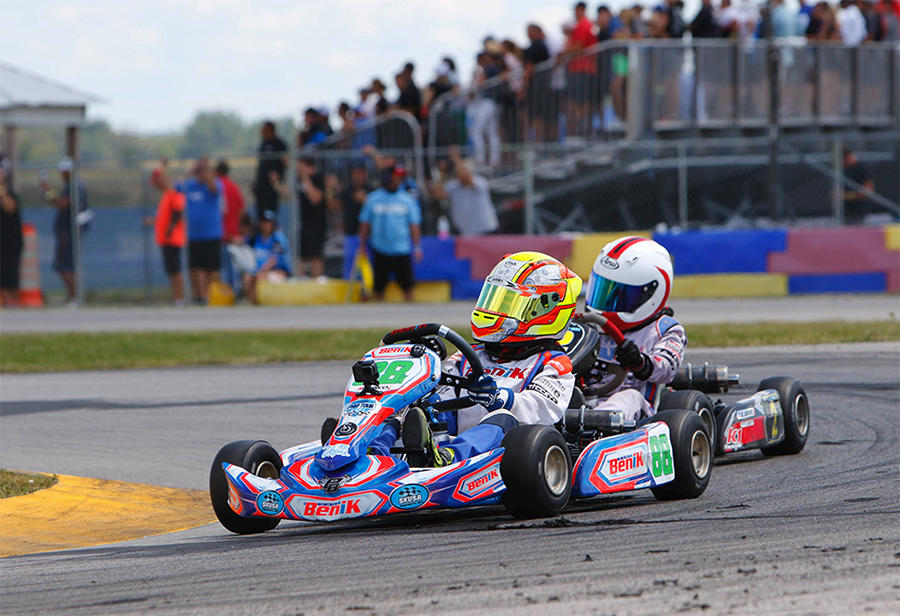 Ft. Lauderdale, FL – August 16, 2017 – It was a weekend filled with triumph for the BENIK team, as they secured their third consecutive championship in the Mini Swift category at the final round of the SuperKarts! USA (SKUSA) Pro Tour series, this past weekend at New Castle Motorsports Park. The Florida squad also earned the vice championship in Mini Swift, as well a win and podium finishes on both days, an excellent way to finish off their Pro Tour season.

BENIK drivers Reece Gold and Carson Morgan put on impressive performances in the Mini Swift category. On Saturday, Gold earned a second place finish in the final, followed by Morgan finishing in the third spot, making it a BENIK-dominant podium. On Sunday, it was a repeat finish for the team, this time with Morgan taking the second spot, and Gold coming home in third. Morgan’s performance allowed him to secure the Mini Swift championship for the Pro Tour series, with Gold finishing the season as the Vice-Champion. This marks BENIK’s third straight year of securing the championship and vice-championship in the stout Mini Swift class in SKUSA Pro Tour competition.

In Micro Swift, Mateo Rubio Luengo continues to impress with another strong drive in the series finale. On Saturday, he took the prefinal win and was in contention for the win in the final, but an on track incident removed him from the race early. Sunday brought Luengo better luck, taking the prefinal win before he went on to take the checkers in the main event.
“Our goal was to continue to secure national level race wins and championships in 2017,” expressed BENIK Kart’s Nick Mitchell. “We have added to our resume nicely and would like to congratulate all of our young competitors.”