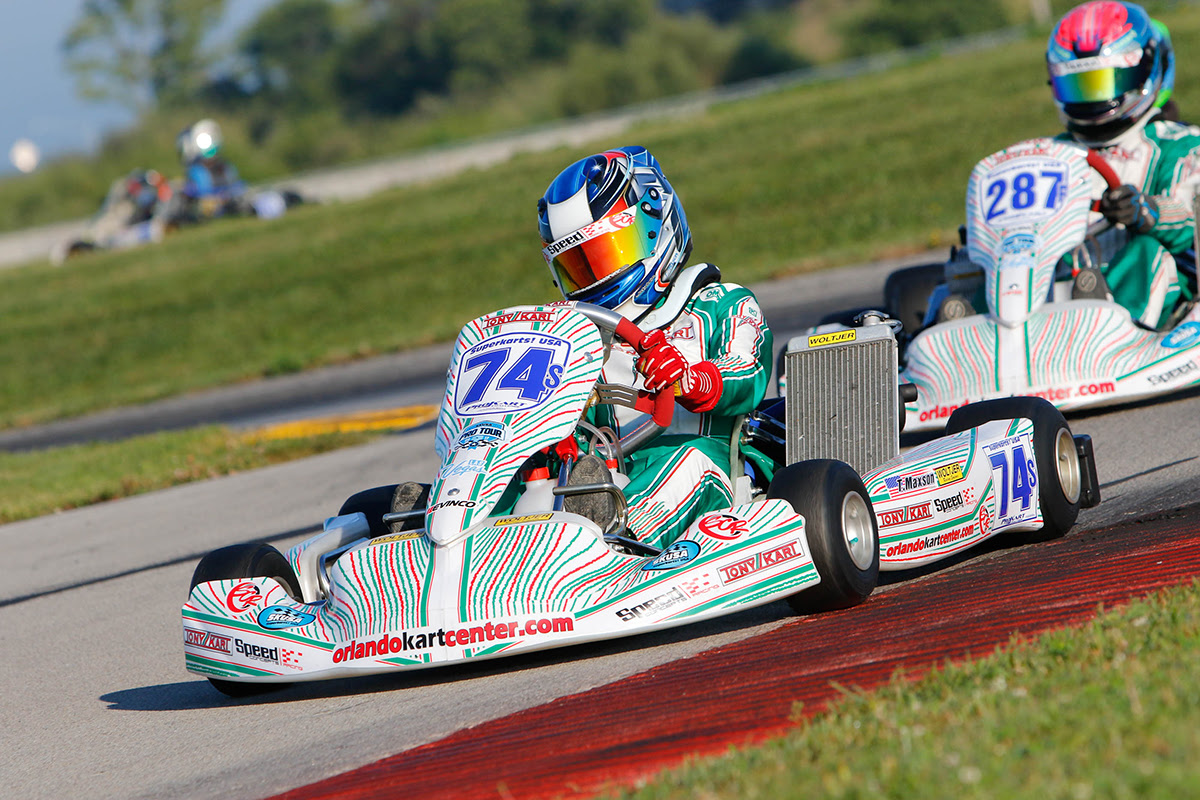 Tyler Maxson was one of the drivers to beat in the last three events at New Castle Motorsports Park
(Photo: www.OTP.ca)

August 16, 2017 – In his first year of Junior competition, Tyler Maxson is quickly becoming a driver to watch. As a rookie in the IAME and Vortex ROK Junior classes, most drivers would be looking to gain experience in the bigger more powerful kart, but not this Georgia resident. After competing in multiple events in 2017, this past weekend closed out a solid stretch of hard racing and great results for Tyler Maxson.

What could be described as the turning point for the young rookie, Tyler performed as a seasoned veteran in the talented field of Junior drivers at the most recent World Karting Association Manufacturers Cup (WKA), United States Pro Kart Series (USPKS) and the SuperKarts! USA SummerNationals, one of the biggest karting events in North America to date this season. Aboard a Woltjer Racing Engines powered Tony Kart chassis with Speed Concepts Racing, Maxson went on to secure five main event podiums in the last six races, a feat in itself in North American karting.

Competing at the New Castle Motorsports Park facility just east of Indianapolis, Indiana, Maxson was able to race against some of the country’s best. In WKA competition, Maxson was one of the dominant Junior drivers taking both Saturday and Sunday’s main event victories in the Pro IAME Junior class. The following weekend, the Georgia resident returned to the same facility for USPKS competition and proved his success the week prior was no fluke. Standing on the podium on two more occasions, Maxson claimed a pair of third place results in the IAME X30 Junior class.

Taking a one week hiatus to recharge his batteries, Maxson and his crew returned to Indiana for the SKUSA SummerNationals. The mid-August event was the conclusion of the SKUSA Pro Tour and would see a spirited drive from the rookie competitor as he had the speed in every on track session.

On Saturday, Maxson went on to secure a victory in the X30 Junior prefinal and closed his day with his first career SKUSA Pro Tour podium in the junior ranks with a second place finish. Sunday would see the Speed Concepts Racing driver overcome adversity. After qualifying deep in the 47-kart strong X30 Junior field, Maxson drove his way forward, slicing his way through the field and managed to claim a top-ten finish.

“It was an awesome month of racing and I am really learning a lot in the Junior classes,” expressed Maxson, who claimed the Mini Swift National Championship in 2016. “I need to thank Woltjer Racing Engines, Speed Concepts Racing and my family for all the success and support in 2017.”

With very little time off, Maxson will return to the New Castle Motorsports Park facility this weekend for the ROK Cup Midwest finale as he looks to continue the success of his 2017 rookie season.