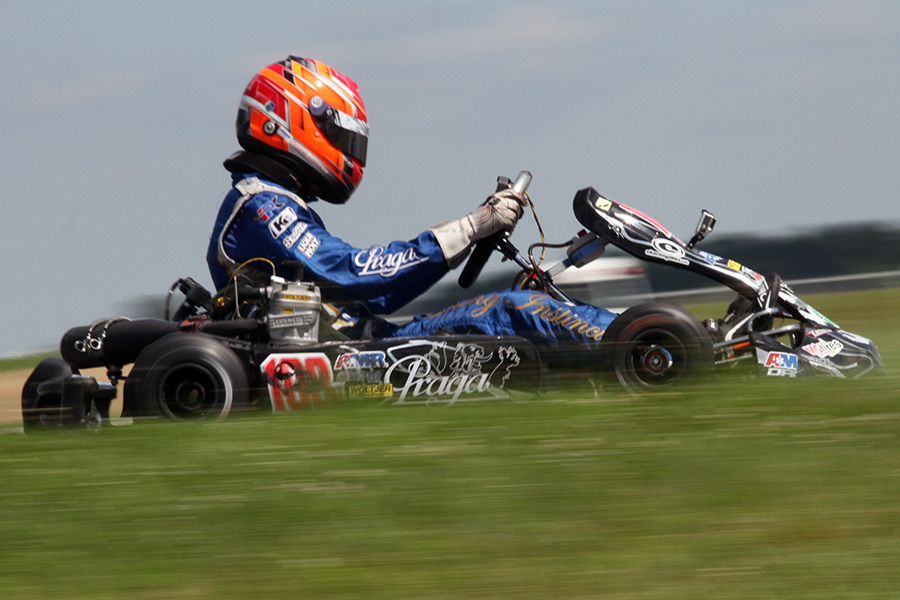 We have heard the term of Mr. October for baseball players who shine in the MLB playoffs, or those who are plastered on a calendar for the ladies. While Brandon Jarsocrak may not be buff enough for the latter, he earned the right to be called Mr. July for his performances last month. The KartSport North America / Praga driver went four-for-four on the weekends, undefeated in the feature races he contested at the four different events at three different facilities with three different tire compounds.

The month began with the inaugural USAC Karting Battle at the Brickyard inside the Indianapolis Motor Speedway. It was an event many karters had dreamed of before, racing at the Brickyard. The temporary course utilized parts of the GP course along with access roads inside the turn three-four of the famed oval. Jarsocrak swept the action in the IAME Senior category (MG Tires) that welcomed over 20 drivers. ‘Money’ cleared the field by three tenths in qualifying before leading all the laps of the heat race and Prefinal. No one touched Jarsocrak in the main event, leading all 14 laps and posting a 1:00.792 fast lap of the race.

The next weekend kept the KSNA team in central Indiana, traveling to the New Castle Motorsports Park for the third event of the WKA Manufacturers Cup Series in the Pro IAME Senior division (Bridgestone tires). The Team Empower Nationals saw Jarsocrak sweep the main event victories. Jarsocrak just missed the fast time in qualifying for the opening day by 18 thousandths of a second. He then ran second and third in the two heat races, shaping up for a battle in the main event. The race was just that, a battle, with the lead changing positions nearly every lap. On the final circuit, top qualifier Braden Eves went from third to first, shuffling up the order in the final corner. Jarsocrak came out with the lead held it to the checkered flag for the victory over Eves and Brandon Lemke. 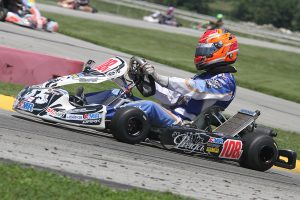 Jarsocrak finished up the month of July with two IAME Pro victories at USPKS (Photo: EKN)

Lemke was the driver to beat on Sunday, earning fast time and winning the Prefinal. Jarsocrak ran in the lead pack in the main event, trailing both along with former series champion Alexander Kardashian. Jarsocrak made his move for the win coming to the white flag, and held on through the final circuit to claim his third series victory of the season. Watch the race in the EKN TV video clip.

After a quick trip back to KSNA headquarters in Mooresville, North Carolina, it was a return to Jarsocrak’s home state and the Pittsburgh International Race Complex for the fourth round of the Gearup F-Series. The Formula TaG category (LeCont tires) saw over 20 drivers take on the two-day event, with qualifying and three heat races conducted in one day. Rain hit the area and Jarsocrak found the most grip, securing the pole position by over one-second in the rain. The opening heat was still wet, with Jarsocrak leading all 10 laps. The second was dry, with Brandon losing the lead at the start. Heading to the white flag, ‘Money’ took back the lead from Ryan Raffa to score the race win. The third moto was all Jarsocrak, as he went untouched for the third race win and the overall victory.

The fourth event took he and the KSNA crew back to New Castle for the third event for the United States Pro Kart Series. The Hoosier State Grand Prix in the IAME Pro division (MG Tires) was all Jarsocrak, nearly sweeping the weekend. The only session Brandon did not finish on top was the opening qualifying session, losing to Alex Bertagnoli. The Senior rookie, Jarsocrak and new EKN TaG Driver Rankings #1 Jake Craig made up the lead pack for much of the weekend. Jarsocrak came away with the two heat race wins, edging out both in the main event for the victory. Sunday was a complete sweep with Jarsocrak leading all three on-track sessions. All three were again the drivers to beat, with Jarsocrak securing the main event victory with a two-wheels in the grass pass after taking the white flag. The victory was the fourth on the USPKS season, helping to earn Jarsocrak with a ticket to the IAME International Final in LeMans, France this October.

It was a record-like month for Jarsocrak, earning him the EKN Driver of the Month honor for July 2017. He entered the 2017 SKUSA Pro Tour SummerNationals with momentum and a shot at the series title. Jarsocrak came out earning his first SKUSA Pro Tour victory in Round Six, helping to put him third overall in the championship standings. Brandon will look to lock up the USPKS titles – IAME Pro and KA100 – at the season finale set for September 22-24 at the Autobahn Country Club in Joliet, Illinois. 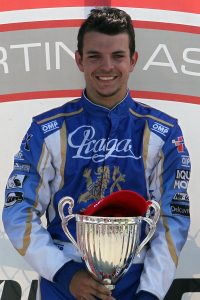 Chassis: Praga
Engine/Engine Builder: X30/KA – Woltjer Racing Engines
Sponsors: KartSport North America, AMR, Woltjer Racing Engines, Race Ready Engineering
Series You Compete In: SKUSA Pro Tour, USPKS, WKA Manufactures Cup
Years Karting: 14
How did you get started in karting? My dad listed all the sports I could play and the last one was racing and I picked racing. That year I got my first kart for Christmas.
What has been the high point in your racing career? Qualifying pole at SpringNationals and having to start last in the pre-final because of mechanical issues, but still making it onto the podium.
What are your goals in racing? Have fun and become some type of professional driver
In a few words, how would you describe your driving style? Calm and consistent
Funniest moment at the race track? Any day or night under our tent.

What do you do when not at the track? Work at KartSport North America or go to school
What are your goals outside of karting? Graduate with a degree in mechanical engineering and get a good job involving that.
What type of street car do you drive? Subaru WRX
What type of street car would you like to drive? Nissan GTR
What are your pet peeves or things that irritate you? Rough driving
What do you think could be done to improve the sport of karting? I think karting needs to find a way to police rough driving. I think the pushback noses help that situation. Also I believe getting karting more exposure will help to get more people in the sport.
What are your favorite aspects about the sport of karting? I like all the people you meet and how high the level of completion has gotten.