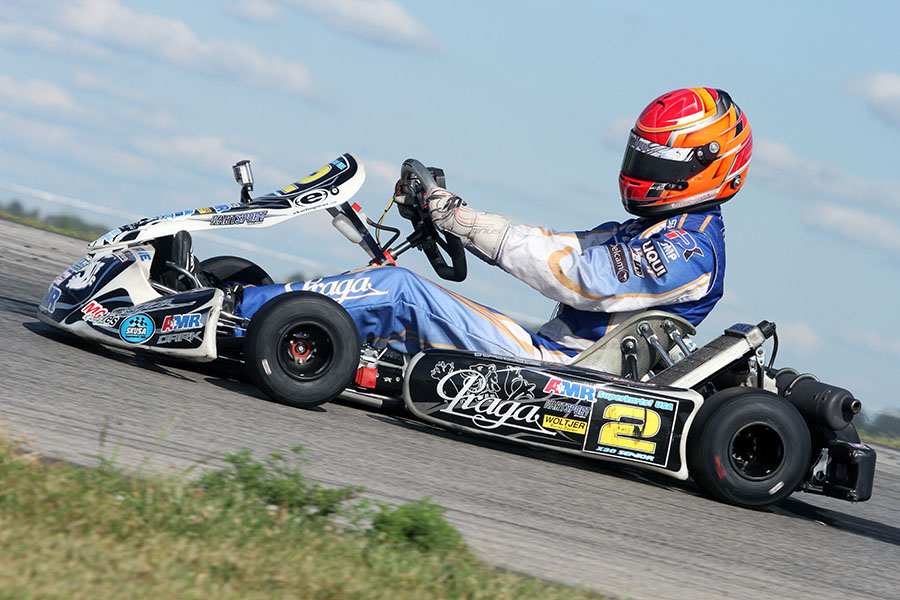 The Superkarts! USA Pro Tour wrapped up a wild run to their eighth season with this weekend’s SummerNationals at the New Castle Motorsports Park. DKC’s Jake French (Sodi Kart) eliminated all doubt that he is the best shifter kart driver in the country when he completed his sweep of the weekend, after international professional Gary Carlton (Formula K) suffered a mechanical DNF.  KartSport North America’s Brandon Jarsocrak (Praga) out-gunned Saturday winner Braden Eves (Vemme) for the win in X30 Senior.

Today marked the most dramatic finish to a SKUSA Pro Tour X30 Senior championship chase. It boiled down to defending champion Ryan Norberg (PSL / Birel ART) and 2014 title winner Jake Craig (RPM / Tony Kart). Both were vying to be the first repeat champion in series history, however, both would have to do it from the back of the field. Both were among the lead pack in the Prefinal. Norberg was turned around in the I-70 corner after contact with Craig. That dropped the defending champ down the order while Craig was involved in contact shortly after with Marjin Kremers (PSL / Birel ART). Kremers was removed from the remainder of the event for the questionable contact, as Craig placed 25th and Norberg 38th. Up front, Brandon Jarsocrak (KSNA / Praga) bounced back from his issues Saturday to qualify first and earn the victory in the Prefinal. 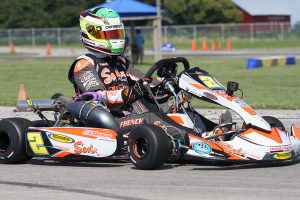 Jake French put an exclamation point on his S1 title with victory on Sunday (Photo: EKN)

Entering the main event, Craig needed to finish third with the fast lap bonus to take the top spot in the championship standings. Norberg, unless finishing on the podium, would not be able to improve his score without placing on the podium. Jarsocrak jumped out to the lead with Saturday winner Braden Eves (MDD / Vemme) giving chase. The two were well out in front as a good handful fought for third. Eventually, Craig worked his way into the third position, an amazing feat to complete the first part of trying to clinch the title. He trailed the top two as they ran nose to tail. Once Jarsocrak and Eves began jostling for the lead, Craig closed in lap after lap. The fast lap however was still needed, as the extra 10 points would be needed to surpass Norberg. On the final lap, Eves led with Jarsocrak second. Craig closed up even more, right on the bumper of the top two entering I-70. He stayed back, with Eves running defensive and Jarsocrak following. The drag race to the line saw ‘Money’ reach the checkered flag first by 13 thousandths of a second to complete the round sweep. The result put Jarsocrak third with Eves in fourth, with Craig coming up four points short of the title. Norberg, who drove up 29 positions to ninth secured the title for the second straight year, the first to do so in SKUSA Pro Tour history. David Ilavia (J3 / CompKart) held his ground, placing fourth with Canadian Kellen Ritter (RPG / Kosmic) in fifth. AJ Myers (TB Kart) was sixth ahead of former SuperNationals winner Andre Nicastro (Kosmic) and Abby McLaughlin (Top Kart). Zach Holden (Energy) completed the top-10, charging up from a broken chain before the green flag on the Prefinal, gaining 43 positions to tenth. 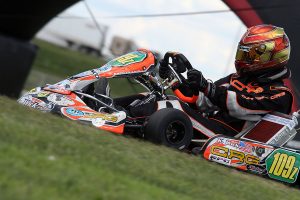 Sunday was a perfect day for a perfect ending to the S1 Pro Stock Honda championship chase for Jake French. The DKC / Sodi Kart driver went unchallenged on the day, wrapping up his championship bid with his third victory on the season, sweeping the day with a perfect score. Gary Carlton (LEM / Formula K) was the lead challenger until mechanical issues put him on the sidelines. That opened up the fight for second as French drove away to a five-second advantage in the long 25-lap battle. Austin Wilkins (DKC / Sodi Kart) was in line for his first S1 podium finish, running second until a mechanical issue put him on the sidelines on the final circuit. SpringNationals winner Billy Musgrave (MRC / Aluminos) was able to edge out Mathias Ramirez (Andersen / Birel ART) for the runner-up spot as the S1 rookie claimed his first podium on the season in the third spot. SpringNationals winner Nic LeDuc (Cambrian / Birel ART) drove to fourth over Franklin Motorsports / Merlin driver Kyle Kalish.

The final round was for Kyle Wick. The Rolison Performance Group / CRG pilot dominated the day to claim his second victory of the season. Championship leader Riley Dickinson (DKC / Sodi Kart) set fast time in qualifying, however, found himself chasing Wick on the day. Nathan Adds (DKC / Sodi Kart) scored the holeshot, until relinquishing the lead to Wick. The Can-Am Karting Challenge standout driver drove to the race win. The main event was all Kyle, as he was ‘Wicked’ fast during the 25-lap event, never putting a tire wrong to a six-second advantage. Adds drove to the runner-up spot ahead of local driver Jimmy Simpson (Sodi Kart). Dickinson ran fourth, securing his first SKUSA Pro Tour championship. Canadian Antonio Serravalle (CRG) ended up fifth after Rory van der Steur (Kosmic) was given a four position penalty for avoidable contact. 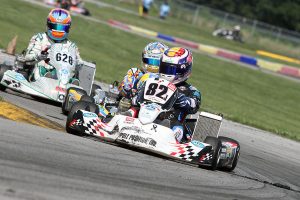 The weekend in New Castle belonged to Laurentiu Mardan (KartCraft / Tony Kart) in the X30 Master division. Mardan swept the action on Saturday, duplicating the feat on Sunday. His performance helped to move him up the championship standings, ending up second in the standings. Defending champion Derek Wang (BBR / FA Kart) kept it close all day, running second throughout the main event, and was able to hold on to the runner-up position to secure his second straight SKUSA Pro Tour title. The show was ‘Hot Rocks’ Travis Irving (FW / CompKart). The championship leader coming into the weekend suffered issues Saturday, and once again in the Prefinal on Sunday. Irving fought back to from 24th on the grid to join the lead pack. Irving tried for the podium, coming up short as Scott Roberts (SCR / Tony Kart) scored the last spot on the steps. Jonathan Silva (FW / CompKart) completed the top-five.

Starting the weekend in the hospital, S4 Master Stock Honda defending champion Ryan Kinnear ended the SummerNationals on a high note. Illness kept Kinnear from getting seat time during practice, however, the 2016 champ bounced back Sunday to earn the victory. Jordon Musser (3G / Birel ART) had the championship locked up, and Kinnear went on the attack Sunday. Kinnear made it a perfect day, earning maximum points leading to the final checkered flag for his second victory of the season. Musser ended up second with Ben Schermerhorn (Birel ART) in third. Nathan Stewart (CRG) and Derek Crockett (Intrepid) made up the top-five. 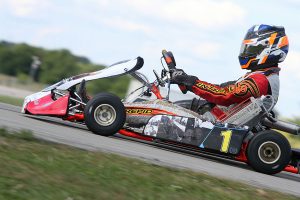 The championship chase in S4 Super Master Stock Honda was nearly completed for defending champion Robert Marks. The PKS / CRG driver held the title chase heading into Sunday. Knowing he needed to earn points to secure the title, Marks went to work. He missed out on the 10-point bonus in qualifying with lead challenger Mike Jones (DKC / Sodi Kart) earning fast time. Marks grabbed the holeshot and went on to win the Prefinal, making his journey shorter. In the main, Marks waited until the end, stealing the lead and the victory to clinch the championship. Paolo Gagliardini (DKC / Sodi Kart) ended up second with Jones in third. Rod Clinard (CRG) was fourth with Michael Rivera (CKR) scoring his best finish at the SKUSA Pro Tour in fifth.

The X30 Junior feature nearly became the first SKUSA Pro Tour win for Jeremy Fairbairn (SRC / Tony Kart). Leading for much of the Final, Trey Brown (Nash / FA Kart) took the lead as they took the white flag. Brown ran a defensive line into I-70, ad was able to win the drag race to the checkered flag by five thousandths of a second for his second of the season. Top qualifier Jak Crawford (Nash / FA Kart) completed the podium ahead of Tyler Gonzalez (SRC / Tony Kart) and Zachary Hollingshead (OGP / Tony Kart). Saturday winner and newly crown champion Dylan Tavella (IRM / Tony Kart) was shuffled back early, ending up 17th. 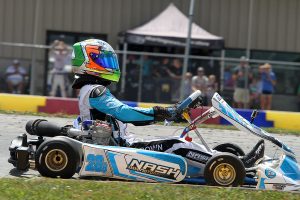 A second victory in X30 Junior for Trey Brown to close out the series (Photo: EKN)

The Mini Swift race came down to just two drivers. Championship leader Carson Morgan (Benik) and SKUSA #2 plate holder Diego LaRoque (PDB). LaRoque put himself on Morgan’s bumper for much of the race, taking over the lead on the final lap in the I-70 corner. Morgan, needing to just finish to secure the title, let LaRoque go unchallenged to the victory. Reece Gold (Benik) needed help in the championship hunt, did not get it but managed to finish third ahead of Nicholas Terlecki (Merlin) and Anderson Leonard (Benik).

The Micro Swift feature was a two driver fight as well. Christian Miles (Formula K) and Mateo Rubio-Luengo (Benik) put themselves out front, posting fast time in qualifying and winning the Prefinal. They drove away from the rest of the field in the main event. It became a drag race to the checkered flag with Miles leading coming out of the I-70 corner. At the line, Mateo was able to edge out Miles at the line by 17 thousandths of a second. Sebastian Ng (Nitro Kart) drove solo in third ahead of Logan Toke (Top Kart) and Frankie Iadevaia (Nitro Kart). Elliot Cox (Energy) was involved in contact early on in the main event, however, wrapped up the championship chase.