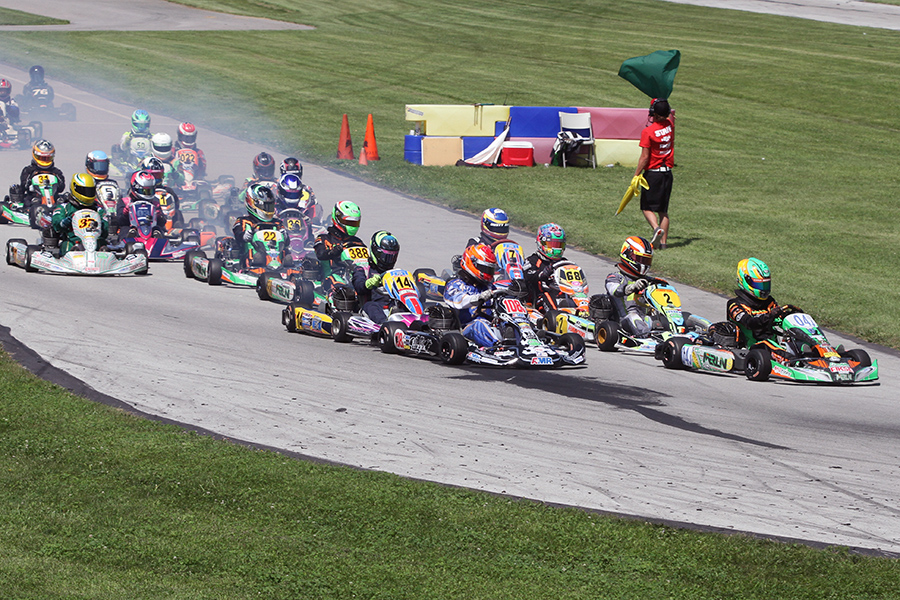 The third event of the 2017 United States Pro Kart Series took teams and drivers to the New Castle Motorsports Park. The Hoosier State Grand Prix was held at the New Castle, Indiana facility on July 28-30, nearing the 150-entry mark. It was the largest race total since the 2016 opener at the central Indiana facility. The core series competitors were joined by a number of competitors preparing for the Superkarts! USA Pro Tour SummerNationals set for August 11-13 at the same 1-mile course.

Amazing to Walk Away 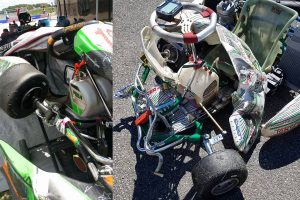 On Saturday, there were two wild incidents during the heat races and thankfully, everyone was able to walk away. The first came in the opening heat for the IAME Pro division. The race was playing out as the field strung out, finding their position. With three laps remaining, hard contact brought out the red flag. Merlin driver Jake Venberg had put himself into the top-20, and was racing hard and trying to move forward. Clay Settles started last and was coming to grips with the pace of the IAME Pro division. Venberg was coming out of the double right-hand corners (T6 and T7), setting up for the entry into ‘cell tower’ corner, when Settles’ kart appeared from the right hand side. Settles was attempting to enter the left-hand turn five ‘blue corner’. Due to the impact, very little on the two karts were left intact, especially the brake pedal structure on Settles’ Tony Kart.

This incident brought a few things up for discussion. While the majority of us do not enjoy having the bodywork on the kart, it did help to reduce the injuries to both drivers. The impact was massive, bending the tubing on both chassis frames to a near pancake. You could have mistaken them for having hit a concrete wall. Having the bodywork and nerf bars on the karts helped to absorb the energy of the impact, the front of Settles’ Tony Kart into the front right side of Venberg’s Merlin. Venberg was actually pinned down in the kart with the side pod and tire pushed up into his leg, making it hard to exit. Mike Giessen, Venberg’s mechanic, had to come out and remove the steering wheel so they could help Venberg exit the kart without causing any more injuries. He was transported to downtown Indianapolis for examination, coming out with a number of bruises and a broken right elbow – which likely made hard contact with the engine. Settles stayed at the track on Saturday, sitting out the action before going to be examined on Sunday, suffering a broken right ankle in two places with a lot of bruises as well.

The second topic of discussion is that this can be a learning experience. The loss of brakes, or something that breaks on the kart which prevents you from making a corner, is a scary experience and something that we rarely see, thankfully. When and if you do, the best decision is to get away from other drivers and try to find a safe area to reach. In this situation, there is plenty of runoff area to the right of the course, however, Settles was already committed to the corner.

And with that, we can also learn that karts will go to places we never think they will. There is a string of barriers in that section of the track for incidents on the exit, however, Settles’ kart went between the cut-off road and the end of the barriers. It was just enough space for him to slip through, and with the assistance of the still-damp grass, go onto the other side into on-coming traffic. NCMP put additional barriers there after the incident, and I believe will stay there permanently.

No matter if it’s the same course you have been going to for five, 10 or even 20 years, you have to understand the areas around the course that can be considered dangerous if a kart was to reach it. Trees are obviously something that need to be covered, along with fence poles.

The second incident proved that point when Cash Wyke went for a ride in his Micro Swift Nitro Kart. After contact entering the turn one, Wyke’s kart started doing cartwheels and landed along the fence after going over both rows of barriers. Thankfully, no one was injured and Wyke exited the kart early, standing up before the kart even came to a rest. Sections of a facility need to be closed to spectators, as we have seen a number of times people standing at the end of the long straight – watching, taking photos, or just walking past to their garage.

We need to stop this lackadaisical attitude when karts are on the track. When a 200-400 pound metal machine loses control, there is no exact science that will tell you which direction it will venture. Parents, mechanics and family members need to understand safe places to be when karts are on-track. And all the karting facilities in the country need to make sure these locations are not accessible to any random person roaming the paddock.

The pushback bumpers got their third test at the United States Pro Kart Series level, with what can be considered a successful weekend for what we really are seeing them do – which is limit the crazy antics at the starts. This weekend, the IAME categories were larger than the previous two weekends. Combine the bumper along with the slower speed of the starts, and they were 90% clean with no ‘stupid’ moves or anyone trying to bite off more then they can chew. The numbers match what we have seen much of the season already with 49 bumper penalties and 18 on-track driver infractions. Penalties are being called and the bumpers are showing who is using them a little too much.

Racing is about having the ability to rebound and improve from the last session. Drivers are always striving to get better every time they get in the seat, or to learn more about how to make the chassis/engine combination faster. Two performances stood out that equated to Sunday victories in the two youngest categories.

Saturday was a tough end for Caleb Gafrarar as the Russell Karting Specialties / Parolin driver flipped at the start of the main event. It was no one’s fault, just part of racing. He and his veteran karting father Chuck Gafrarar will tell you that. Back in their pit, Saturday evening was spent moving all the components from the bent chassis to a brand new Parolin frame. Caleb was ready to get back behind the wheel and was quick out of the box on Sunday morning. Gafrarar drove his way to victory on Sunday for his first USPKS triumph.

Another driver to earn his first USPKS victory with a great drive from nowhere to the lead on the final lap was James Egozi. The Koene USA / Tony Kart driver went from 12th to 6th in Saturday’s main event. A tough session in qualifying on Sunday put him 15th overall and despite posting the fast lap of the race, he finished the Prefinal in the same finishing position after getting shuffled back mid-race. Starting from row eight for the main event, Egozi had 17 laps to move forward. His drive, powered by Comet Racing Engines, was a combination of having the right setup, the right engine package, and the confidence to move forward. 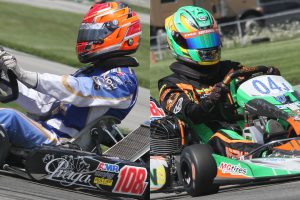 The two Senior classes were dominated by two drivers on the weekend – Brandon Jarsocrak and Alex Bertagnoli. Jarsocrak – the KartSport North America / Praga driver – has been on a roll over the last four weeks, winning all the TaG main events he’s competed in, including the two IAME Pro features at the USPKS event. Bertagnoli was his lead challenger, scoring the pole position on Saturday, while Jarsocrak swept the remaining sessions on the weekend. On the flip side, it was the Franklin Motorsports / Merlin driver who nearly swept the KA100 weekend. Saturday was all Bertagnoli with a sweep of Round Five, while Michael McAndrews (Fullerton) scored fast time in qualifying on Sunday to break up the perfect score. Jarsocrak finished second to Bertagnoli in both main events. Heading to the series finale, Bertagnoli holds an eight-point advantage in the championship chase. In IAME Pro, Jarsocrak holds a comfortable lead in the standings thanks to the DQ of Bertagnoli in Pittsburgh. The KA100 battle is sure to be exciting at Autobahn in September. 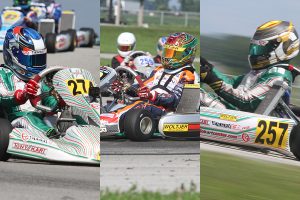 Maxon, Tavella and Gonzalez are the Kings of New Castle over the last four events (Photo: EKN)

Over the last year, the New Castle Motorsports Park has had four major events – 2016 SKUSA SummerNationals, WKA New Castle 2016, WKA New Castle 2017 and the USPKS 2017 event. Each of those events had two main events, with three drivers taking home the eight victories – Dylan Tavella, Tyler Gonzalez and Tyler Maxson. These three have been the top Junior drivers at New Castle for the last 12 months with the graduation of Nicholas d’Orlando and Alex Bertagnoli to the Senior division – both double winners in the other 2016 New Castle events. Tavella (IRM / Tony Kart) swept the 2016 SummerNats and was the Saturday winner at the USPKS event. He looked to grab the victory on Sunday, however, the 2016 SKUSA SuperNationals winner Tyler Gonzalez (SRC / Tony Kart) came through with the victory. It was his third victory at the facility with his sweep of the WKA event in September 2016. In July, Tyler Maxson drove to victory both days at the WKA Man. Cup event, adding his name to the list. If you were to place a wager on the upcoming SummerNationals at New Castle, one of those three would give very good odds to end up on the podium throughout the weekend. 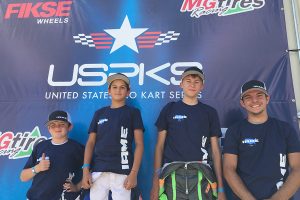 The event at New Castle awarded three tickets to the IAME International Final event in Le Mans, France on the weekend of October 14-15. The leaders in the championship chases for IAME Pro, IAME Junior and Mini Swift each earned a full ticket to compete at the world championship event, representing the United States Pro Kart Series as part of Team USA. Brandon Jarsocrak will compete in the Senior division, with Maks Kowalski racing in Junior having competed at the event previously. Mini will see Santiago Trisini thanks to the full ticket earned by leading the Mini Swift category, joined by Brent Crews who won the entry spot for his weekend total back at the Pittsburgh event. This year will be a large contingent racing under the Team USA banner, joining SKUSA racers along with other drivers making the trek to France.

The series wraps up at a new venue, the Autobahn Country Club in Joliet, Illinois. The facility, located southwest of downtown Chicago, is building a strong karting club foundation, and the USPKS will take on their karting circuit on the September 22-24 weekend.