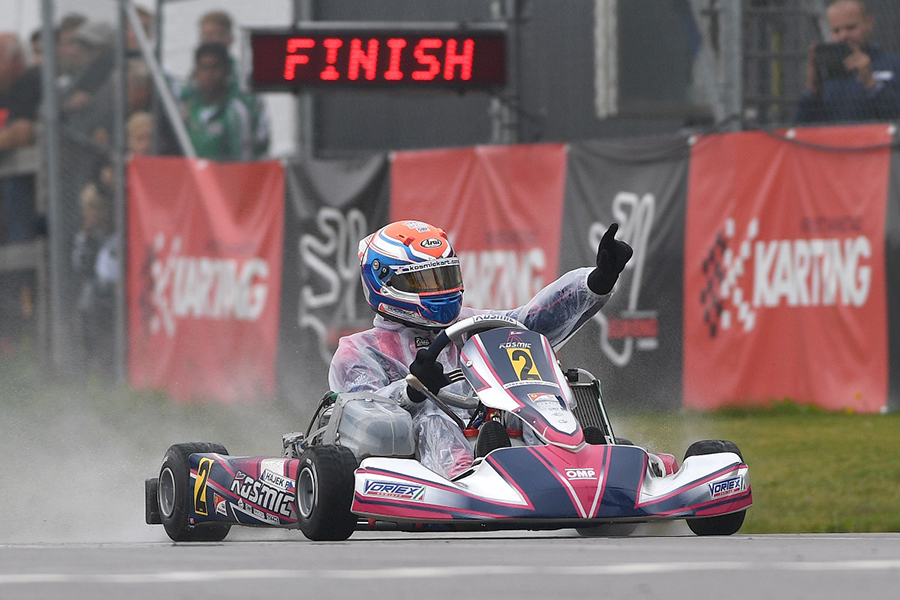 KZ victory with Hajek and Basz’s 2nd in OK class, file the last CIK-FIA European competition of 2017. KZ. The Swedish race has given us much satisfaction, thanks to Patrik Hajek’s wonderful success and the confirmation of the second place in the championship. Patrik, at the end of the heats, run both on a dry and wet track, finished second, deserving the first row in the final grid. In the final, our driver has taken advantage of his perfect chassis and went straight to success, intensified by a best lap (59.968).

In the direct drive category, we placed three of our drivers in the top nine positions at the end of the heats. Noah Milell finished second (3 heats won), Karol Basz fifth (2 heats won) and Théo Pourchaire got the ninth place. Vebster managed to enter the final in the home race, despite a stop in the first heat. The final started badly for us, with Milell retiring on first lap, due to a collision. The positive notes came from Karol, who ran a difficult race on the wet track with a positive result, finishing second and thus proving to be the only one able to keep the rhythm of the winner, Kenneally. In the championship Basz finished fourth.

Roman Stanek gained good scores even on the occasion of the last European event, with a sixth place in the final. Roman has always performed, throughout the championship, at the same level of the best drivers, succeeding in getting into the scoring area in three races out of five KZ2. Axel Bengtsson and Oliver Rasmussen ran several positive heats, easily reaching the final.