Winners and Champions in Kristianstad 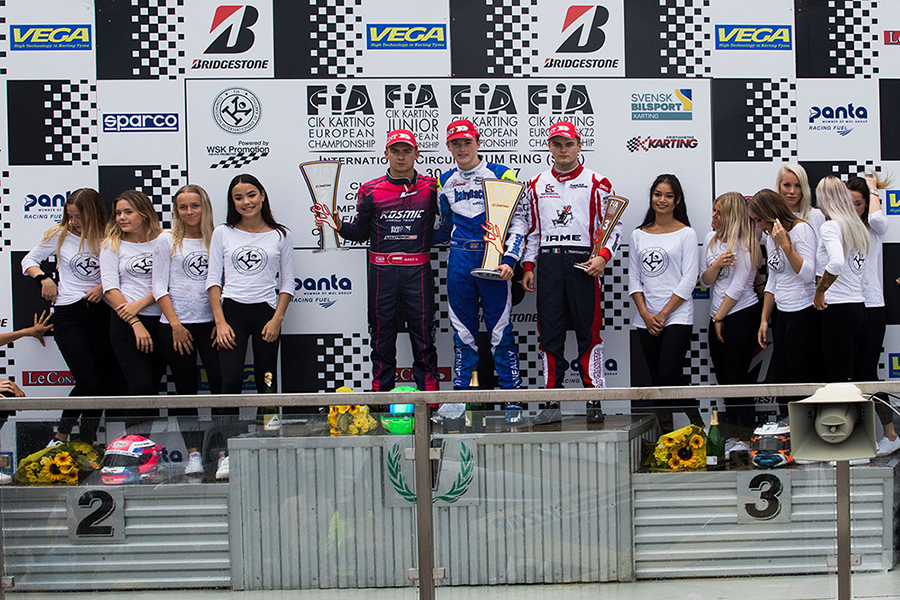 It was a magnificent finale the one of the CIK-FIA European Championship hosted by the Swedish circuit Asum Ring in Kristianstad. Each category involved in the competition offered a great double show: drivers challenged each other to win the Finals but also, in the follow places, to gain points to win the European titles. The rainy day made predictions particularly hard. The highlights of the whole weekend will be the main topic of the special TV report on Motorsport.TV next week.

OK: Kenneally wins the round, Taoufik the Championship

At the start of the Final, the Norwegian Dennis Hauger (CRG-Parilla-LeCont) took the lead but was then overtaken by the English Finlay Kenneally (Tony Kart-Vortex), the top driver after the qualifying phase. The Polish Karol Basz (Kosmic-Vortex) closed the gap and managed to grab the second position, beating Hauger into third. The Championship leader, the Moroccan Sami Taoufik (FA Kart-Vortex) was a bit behind but ahead of the Spanish Pedro Hiltbrand (Tony Kart-Vortex), which was his main challenger to the title. Hiltbrandt, however, lost all hope when his kart slowed down and he was forced to drop back to the last positions. It was at this time that Taoufik was sure to win the title and, thanks to his final fifth place, he increased his score in the standings. During the last stage of the race, Travisanutto first passed Taoufik, then Hauger. The Italian driver secured the last podium position behind the winner Kenneally and the runner-up, Basz. On top, the three drivers on the podium.

In OK Junior, Doohan (FA Kart-Vortex-Vega) had a winning strategy: the Australian driver, in pole position after the heats, gained an early lead thanks to an outstanding start. Behind him, the two English drivers Jonny Edgar (Exprit-TM) and Harry Thompson (FA Kart-Vortex) battled for the title: a breath-taking duel full of overtaking manoeuvres. Eventually, it was Edgar who managed to cross the finishing line behind Doohan. Edgar was then hit by a penalty for overtaking under yellow flags. So, Thompson placed second, the German Hugo Sasse (CRG-Parilla) third and Edgar fourth: a result which, anyway, allowed him to win the Championship. Above, a photo of the OKJ podium before the penalty to Edgar.

KZ: Hajek is the winner, De Conto the European Champion

The Italian Paolo De Conto (CRG-TM-Bridgestone), who had already won the KZ title last week, was not as conspicuous as the Czech Patrik Hajek (Kosmic-Vortex): the latter, thanks to a great start in the Final, managed to pull away, while the Dutch Marijn Kremers (BirelArt-TM) – the best after the qualifying phase – lost lots of positions. He was passed also by his fellow countryman Bas Lammers (Sodi-TM) and by De Conto. Kremers finished fourth, after a thrilling duel with Corberi and Puhakka. Hajek secured victory and celebrated on the podium (in the photo above) together with Lammers, second, and De Conto, the new European Champion.

Impressive tussle at the start of the KZ2 Final, with the French Adrien Renaudin (Sodi-TM-Bridgestone) who managed to pass all the drivers in the top positions who, during the first lap, all lost lot of ground. Among them, also the French Tom Leuillet (Sodi-TM), the best driver after the qualifying phase. The heated battle for the head of the race obliged the Italian  Matteo Viganò (Tony Kart-Vortex), one of the Championship frontrunners, to fight hard to reach the third position, behind Renaudin and the Brazilian Gaetano Gomes Di Mauro (CRG-TM). All the frontrunners had troubles during the race, including Viganò who lost ground and cleared the way for Leon Köhler (Tony Kart-Vortex). The German driver, the leader of the Championship, finished only 14th, but it was enough to secure the title. Behind Renaudin, the winner (above, on the podium), Gomes Di Mauro was the runner-up and the Dutch Martijn van Leeuwen (Energy-TM), placed third.